"For the last two years the Conservative party have been confronted with a military policy
little to their liking, and not at all to their interest.
This policy originated from the hasty and excited decisions of war,
and will not bear the scrutiny and reflection of calmer times.
It is founded on no true appreciation of our needs,
and shared with a merry disregard of our resources both in money and men." 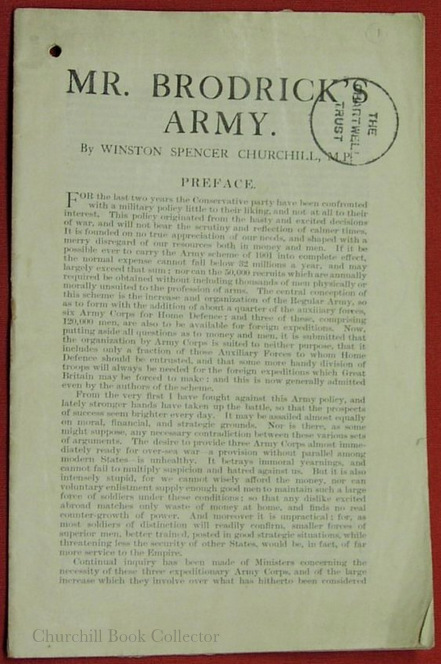 In 1903 Winston Churchill was a brash new Member of Parliament. The Secretary of State for War, John Brodrick, a fellow Conservative and Cabinet member, had introduced a plan for expanding the peacetime Army.   Though Churchill had been an Army officer and had participated in four wars on three continents before election to Parliament in 1900, he vehemently assaulted Brodrick's plan.  Fascinatingly, this was the same fight upon which Churchill's father, Lord Randolph Churchill, had gambled and lost his own political career in 1886. Unlike his father, Churchill ultimately prevailed; Brodrick was left politically isolated and removed from the War Office to become Secretary of State for India.

Churchill's opposition included six major speeches on the subject.  These six "oratorical assaults" were published in 1903 by Arthur L. Humphreys of London in an immensely rare wraps edition titled Mr. Brodrick's Army.  The political fight over Brodrick's army scheme was a personal and political watershed for Churchill.  It can fairly be said that the young Churchill's brazen and successful opposition to a powerful figure in his own party on this particular issue helped him emerge from the long shadow of his father.  Moreover, the fight helped set the stage for Churchill's 1904 defection from the Conservatives to join the Liberal Party.

Fascinatingly, there has been some dispute as to whether there were one or two editions in 1903. 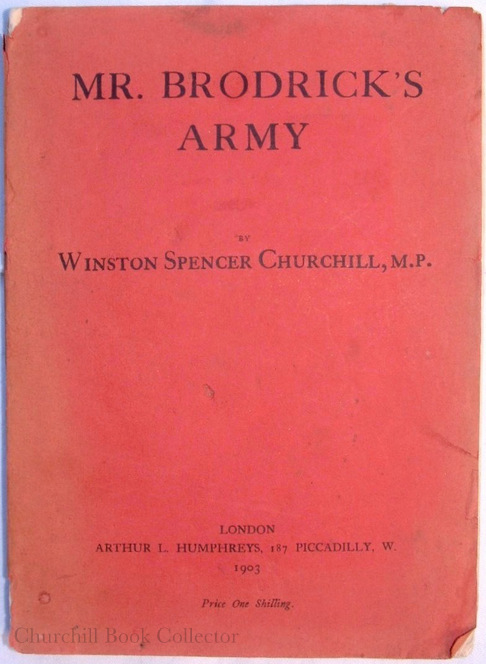 There is no doubt that two versions were produced by the publisher, Arthur Humphreys.  The first edition, which is almost unheard of, was bound in self-wrappers and wire-stitched, in true pamphlet fashion.  It is the second edition, bound in red card wrappers, that most collectors associate with the first edition.

Some have previously speculated that the first version was never released, Churchill being allegedly displeased with its appearance and demanding a better production.  However, Churchill Bibliographer Ronald Cohen substantively disputes this claim.  Cohen gives the following reason for two distinctly differing versions: "I expect that Humphreys initially chose a cheaper production format in order to avoid the costs associated with the far more attractive second-edition format and that, when it became clear that sufficient demand existed for the work, he determined to produce it in a more appealing format..."  (Cohen, Volume I, A10.1, p.112). 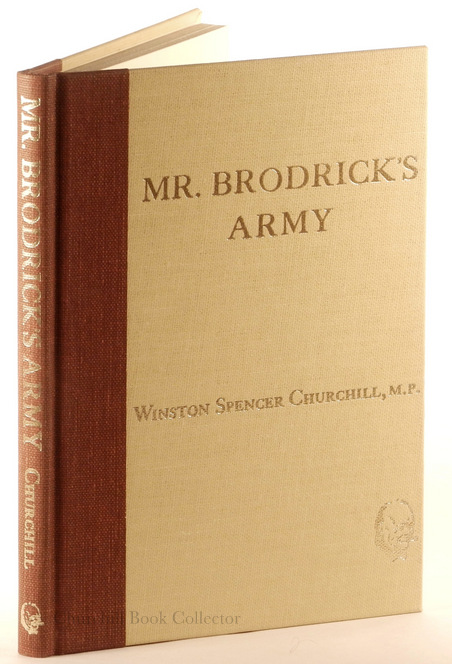 The salient fact is that any collector would welcome either version, irrespective of the bibliographic niceties.

No further publication of the book occurred until the U.S. first edition, issued 74 years later in 1977 as a meticulous facsimile reprint.  The original work of 102 pages plus red card wraps was faithfully reproduced, with five additional pages added at the front including a preface by Manfred Weidhorn and endpapers reproducing Churchill’s entry in Who’s Who.  The publisher - Dalton Newfield of the Churchilliana Company in Sacramento, California - produced the edition in two bindings: a "library binding" featured brick red cloth and a "collector's binding" featuring a brown buckram spine over tan linen cloth covered boards.  Both bindings feature a gilt stamped spine and front cover. Sacramento, California: The Churchilliana Company, 1977. First U.S. edition. Hardcover. This copy of the first U.S. edition in the publisher’s "collector's" binding is in fine condition, with no wear, soiling, previous ownership marks, or any signs of handling or use. The sole defect is spotting to the otherwise clean page..... More