By Winston S. Churchill
First published in 1906 by Macmillan and Co. Limited, London

"Lord Randolph's part in national affairs is not to be measured by long years of office.
No great legislation stands in his name upon the statute book. He was a Chancellor of the Exchequer without a Budget, a Leader of the House of Commons but for a single session, a victor without the spoils. No tangible or enduring records - unless it be the Burma province - exist of his labours, and the great and decisive force which he exerted upon the history of the Conservative and Unionist party might be imperfectly realized by a later generation, unless it were explained, asserted, and confirmed by the evidence of those who came in contact or collision with his imperious and vivifying personality." 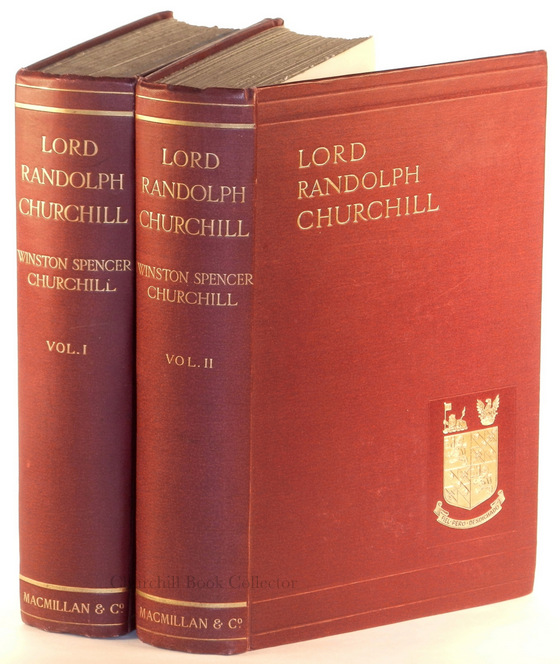 In time history would of course dramatically favor Winston, but at the time the son dwelt very much in his father's shadow, both emotionally and in terms of the political career to which he already aspired.

That Churchill would be selected as biographer by Lord Randolph's executors was not a foregone conclusion.  Churchill first entertained the idea soon after his father's death, but it was not until late in 1902 that he was appointed.  Churchill then spent two and a half years researching and writing.  We can assume that it was not only a major literary effort, but an emotional one as well.  Of the work, Churchill wrote to Lord Rosebery on 11 September 1902 "It is all most interesting to me - and melancholy too" (R. Churchill, WSC, Companion Volume II, Part 1, p.438).

When he first contemplated writing his father's biography Churchill was a still an itinerant soldier and war correspondent who had yet to write his first book.  By the time the work was published in 1906, he already had half a dozen books to his credit and half a decade in Parliament.  Additionally, Churchill had already left his father's political party, prevailed in the same political battle that had terminated his father's career, and was just two years from his first Cabinet post.

Churchill's biography of Lord Randolph concentrates on his father's career in Parliament after 1880.  Though Churchill was criticized by some for overplaying his father's accomplishments, the work was well received both as a frank portrayal of Randolph's extremes and as a showcase for the son's literary talent.

The two-volume British first edition is aesthetically pleasing, featuring deep red cloth, untrimmed page edges, gilt stamping, and the family coat of arms on the front covers. The dust jackets are printed in dark blue on tan paper, with the publisher's "CASH PRICE IN GREAT BRITAIN" and decorative device at the foot of the spines and "Macmillan & Co.'s New Books" advertised on the rear faces.

The dust jackets are extravagantly rare.   Only two and a half examples of jacketed British first edition sets are known to survive.  Thus nearly all collectors must content themselves with unjacketed copies.  Though first editions are fairly common, collector-worthy copies are elusive.  The smooth red cloth binding of this edition proved quite susceptible to fading and wear, and the contents, with their untrimmed fore edges and thick laid paper, to heavy spotting.

Collectors should note that when the British first edition was published, first edition sheets were acquired from Macmillan by The Times Book Club, slightly trimmed, more plainly bound, and sold at a significantly lower price.  This vexed Churchill, who wrote to Macmillan calling this a “shabby trick” and expressing concern that it might injure sales of the publisher's binding of the first edition.  As then, today the publisher's binding is valued higher than The Times Book Club binding. However the latter is nonetheless a cost-effective way to obtain original first edition sheets. 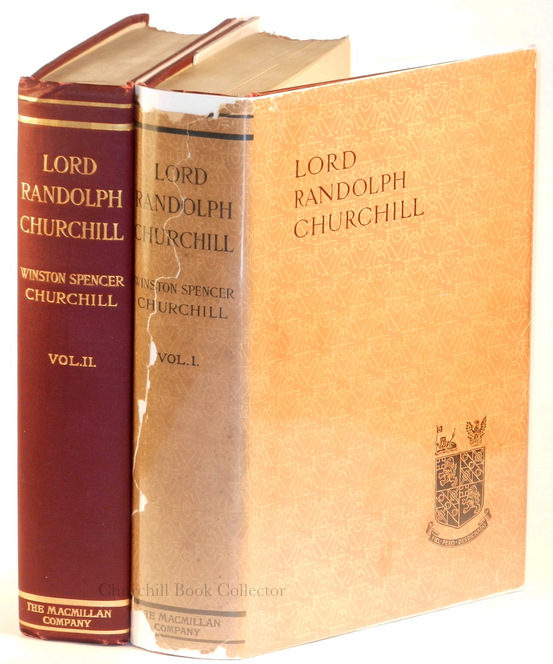 The U.S. first edition is visually similar, though perhaps aesthetically superior to the British as it is bound in a brighter red, ribbed cloth and has gilt top edges.  Until recently, bibliographers could only speculate on the issuance and appearance of the U.S. first edition dust jackets.  Langworth reasonably speculated that they "presumably follow the style of the Home Issue" (Connoisseur's Guide, p.72) and Cohen prudently commented only "Presumed but none known."  (Vol. I, A17.2, p.133)

We are pleased to have discovered the only known examples of the U.S. first edition dust jackets - albeit damaged and incomplete.  This discovery reveals that the U.S. first edition dust jackets were not only truly striking, but also markedly different from their British counterparts, being printed on light orange stock with a contrasting darker orange print revealing a publisher's device repeated as background on the entire jacket and the title, author, and coat of arms printed in black.

Regrettably, the sole example of the U.S. first edition dust jackets known to survive is this partially jacketed U.S. first edition set.  Volume I of this set retains the front flap, front face, spine, and two-thirds of the rear face.  Volume II retains the front flap, a fraction of the spine, the rear face, and rear flap.  The flaps allow us to see the original, vivid and unfaded color.  Together, the two jackets allow us to confirm the original appearance of the undamaged whole.

In 1907 the publisher issued a one-volume edition.  This edition contains the full, unabridged text of the two volume work as originally published in 1906, but is printed on thinner paper. 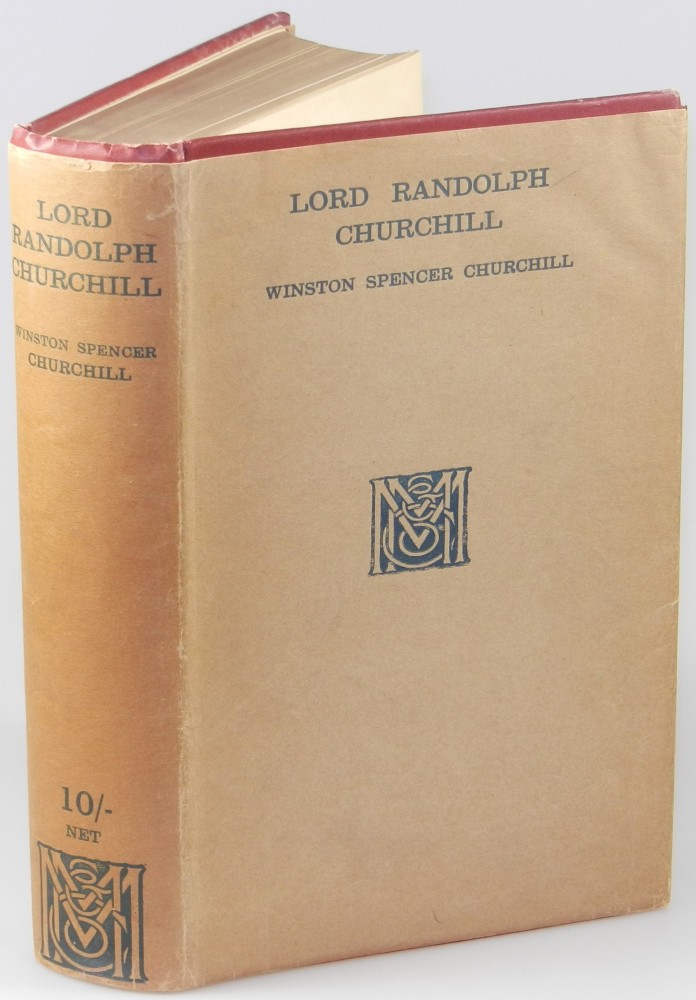 The binding of this one-volume edition closely resembles the first edition of just a year earlier, lacking only the first edition's front cover gilt stamped title and coat of arms. The dust jacket is likewise similar, printed black on tan paper with a publisher's price and decorative device at the foot of the spine, the publisher's decorative device repeated on the front face, and "Some Standard Biographies" published by "MACMILLAN AND CO., LTD." advertised on the rear face.

Though it had only a single printing, the one-volume edition was bound and sold over a long period, resulting in variations that include gilt or plain top edge, trimmed or untrimmed fore edges, and two known states of the dust jacket.  As late as 1925, the 1907 printing of the first one-volume edition was still being sold with a dust jacket reflecting a higher price and advertisements for contemporary works.  This is the dust jacket described above and pictured here. London: Macmillan and Co. Limited, 1906. First edition, only printing. Hardcover. This is the first edition of Churchill's biography of his father, inscribed on the day before publication to Churchill's lifelong friend, confidante, and best man at his wedding, Hugh Cecil. The unusually personal inscription inked in black in four..... More London: Macmillan and Company, 1906. First edition, only printing. Hardcover. This is a two-volume British first edition set with interesting provenance. Churchill's first biographic work concentrates on Lord Randolph's career in Parliament after 1880. Lord Randolph died in January 1895 at age 45 following the spectacular collapse of both his..... More London: Macmillan and Company, 1906. First edition, only printing. Hardcover. Churchill's first biographic work concentrates on Lord Randolph's career in Parliament after 1880. Lord Randolph died in January 1895 at age 45 following the spectacular collapse of both his health and political career. His son Winston was 20 years old..... More London: Macmillan and Company Limited, 1907. First one-volume edition. Hardcover. This is the 1907 first one-volume unabridged edition of Winston Churchill’s biography of his father. The British first edition was published in two volumes in 1906. In 1907, the publisher issued this one-volume edition, containing the full text of the..... More London: Macmillan and Company, 1907. Hardcover. This is the 1907 first one-volume unabridged edition of Winston Churchill’s biography of his father. The British first edition was published in two volumes in 1906. In 1907, the publisher issued this one-volume edition, containing the full text of the two-volume work as originally..... More London: Macmillan and Company, 1907. Hardcover. This is the 1907 first one-volume unabridged edition of Winston Churchill’s biography of his father. The British first edition was published in two volumes in 1906. In 1907, the publisher issued this one-volume edition, containing the full text of the two volume work as..... More