Thoughts and Adventures / Amid These Storms

"Certain it is that while men are gathering knowledge and power
with ever-increasing and measureless speed,
their virtues and their wisdom have not shown any notable improvement
as the centuries have rolled. The brain of a modern man does not differ in essentials
from that of the human beings who fought and loved here millions of years ago...
We have the spectacle of the powers and weapons of man far outstripping
the march of his intelligence; we have the march of his intelligence
proceeding far more rapidly than the development of his nobility.
We may well find ourselves in the presence
of 'the strength of civilization without its mercy'." 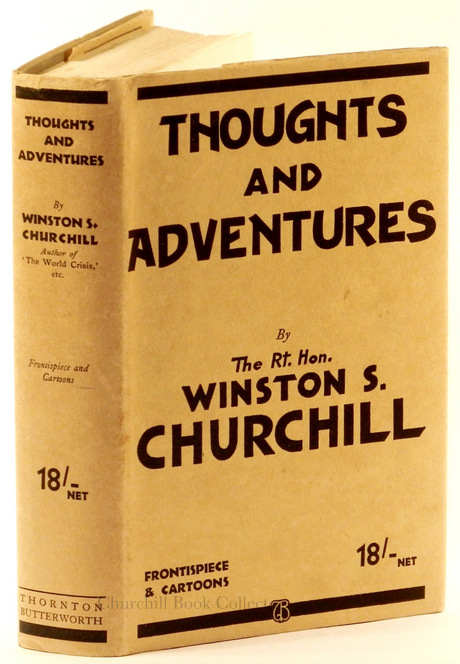 This is Churchill's collection of 23 engaging essays on an incredibly wide variety of subjects.  It has been called "The broadest range of Churchill's thought between hard covers" and reflects the two qualities that so characterize Churchill's life - a remarkable breadth of both mind and life experience.

The content ranges from musing both personal and political to prescient speculating on the future.  The original front flap blurb rather captures the spirit of the work:  "Whether he is dealing with personal reminiscences, or telling us his views on any subject under the sun, Mr. Churchill stamps the page with his own vivid personality."  In a 31 May 1932 letter to his publisher about the book, Churchill characterized his book thus: "...although there is no one single theme, it has some of the best things in it I have ever written."

In Britain, the work was published on 10 November 1932 as Thoughts and Adventures, compellingly wrapped in a fairly simple but attractive tan dust jacket with bold black print. 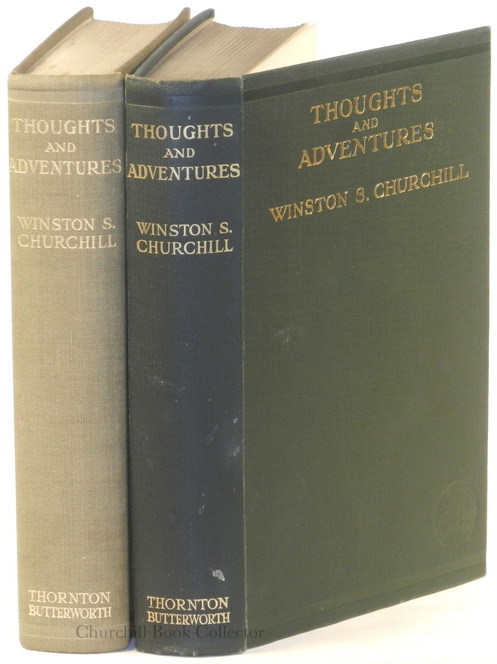 There were four printings of the first edition, the second and third in November 1932 and the fourth in December.  All later printings we have encountered bear dark green cloth bindings the same as the first printing binding variant noted above.  A second dust jacket was introduced beginning with the second printing, prominently adding four lines to the front cover in deep red featuring a positive blurb from the Morning Post and with changes to the front flap, including reviews from nine British papers.  In his excellent Bibliography, Ronald Cohen states "I expect that copies of the second printing would have been wrapped in first-edition dust jackets until these ran out or until such time as the newly designed jackets including reviews became available."  (Vol. I, A95.1.c, p.384)  This makes sense and we have encountered second printing copies in both first and second printing dust jackets.  Nonetheless, collectors should note that we have also encountered two third printing copies on two separate occasions bearing first printing dust jackets.

Though not so noted in the table of contents, the first edition is illustrated.  In addition to the frontispiece photograph of Churchill seated and painting, the chapter "Cartoons and Cartoonists" reproduces six cartoons in black and white, five of these featuring Churchill.  "Just as eels are supposed to get used to skinning, so politicians get used to being caricatured... when the cartoons stop... They fear old age and obsolescence are creeping upon them.  They murmur: 'We are not mauled and maltreated as we used to be.  The great days are ended.'"  (Thoughts and Adventures, pages 27-28)  There are also two small maps at p. 151. 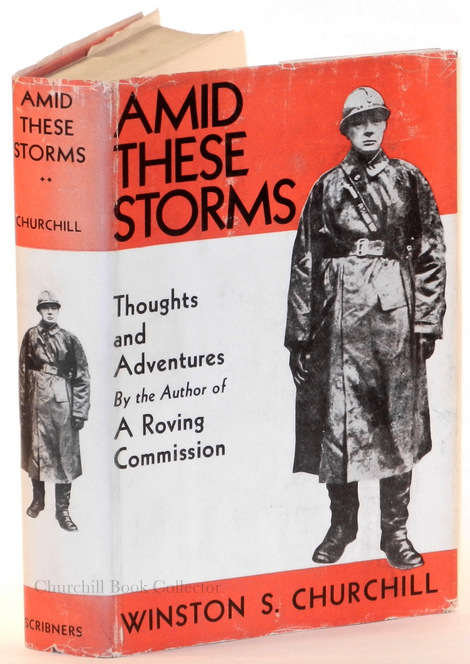 Published in the U.S. as Amid These Storms on 25 November 1932, this is one of the few Churchill first editions for which the U.S. edition bears a different title than the British.

In the U.S. sales were slower and there was just a single printing of 4,000 copies.  While the U.S. first edition text was photo-reproduced from the British first edition, everything else about the edition differs markedly from its British counterpart.

The bright orange coarse cloth binding of Amid These Storms matches the style of the 1930 U.S. first edition of A Roving Commission (published as My Early Life in Britain).  Indeed the U.S. Publisher, Charles Scribner, regarded this book as a sort of sequel to A Roving Commission (19 May 1932 letter from Scribner to Churchill).

The dust jacket for Amid These Storms is entirely unique and strikingly so.  It bears a full length photo of Churchill in Flanders in 1916, wearing his French Poilu's helmet.  This image appears on both the spine and front face.  The orange color on the dust jacket and the red-orange binding proved exceptionally prone to sunning. Further, the coarse cloth binding was also very susceptible to soiling. Consequently truly bright copies are a rarity. London: Odhams Press Limited, 1948. Hardcover. This is a postwar reprint inscribed to Clare Boothe Luce, a longtime friend of Winston Churchill rightly called “one of the most remarkable women of 20th-century America.” The inscription, inked in blue in five lines on the front free endpaper, reads: “To | Clare..... More London: Thornton Butterworth Limited and Odhams Press Limited, Ernest Benn Limited, 1932. First edition, first printing. Full leather. This is a magnificent fine binding of Thoughts and Adventures, Churchill's collection of 23 engaging essays on an incredibly wide variety of subjects. It has been called "The broadest range of Churchill's..... More New York: Charles Scribner's Sons, 1932. First edition. Hardcover. This is a strikingly clean, jacketed example of the U.S. first edition, only printing. Churchill's collection of 23 engaging essays on an incredibly wide variety of subjects has been called "The broadest range of Churchill's thought between hard covers" and reflects..... More London: Thornton Butterworth Ltd., 1932. First edition, fourth and final printing. Hardcover. This is the first edition, fourth and final printing, an excellent copy, quite scarce thus in the dust jacket. This fourth printing was issued in December 1932, just a month after the November 1932 first printing. This is one..... More London: Thornton Butterworth, Ltd., 1933. Hardcover. This book is a collection of 23 engaging essays by Churchill on an incredibly wide variety of subjects. From the original front flap blurb: "Whether he is dealing with personal reminiscences, or telling us his views on any subject under the sun, Mr. Churchill..... More