Arms and the Covenant / While England Slept

"Now the victors are the vanquished,
and those who threw down their arms in the field and sued for an armistice
are striding on to world mastery." 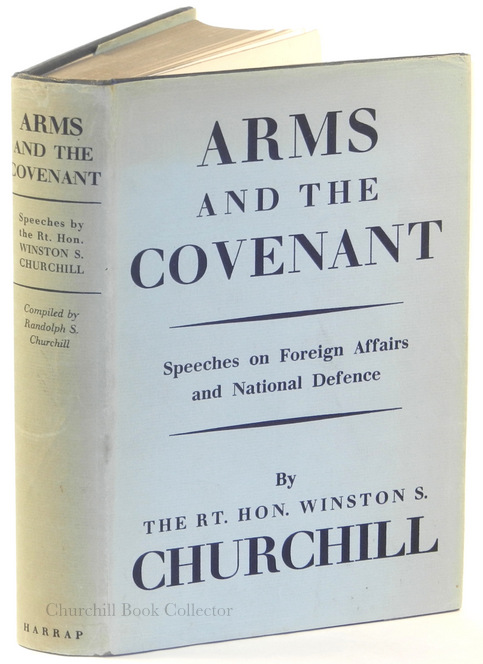 Arms and the Covenant is the precursor to Churchill's famous war speeches.  The book contains text from 41 Churchill speeches spanning 25 October 1928 to 24 March 1938.  These criticize British foreign policy and warn prophetically of the coming danger.

The speeches were compiled by Churchill's son, Randolph, who contributed a preface and is credited with compilation on the title page and jacket spine.  Randolph would do the same for his father's first volume of war speeches, Into Battle, published in an almost unrecognizable world less than three years later.  The “Covenant” in the title of Arms and the Covenant refers to the League of Nations Covenant, the instrument that was to maintain peace in the wake of the First World War.

The world remembers the resolute war leader to whom the British turned, but it is easy to forget the years leading up to the war which Churchill spent persistent, eloquent, and largely unheeded.  Churchill bibliographer Frederick Woods called this edition "probably the most crucial volume of speeches that he ever published."  As testimony to the book's importance, a copy of the U.S. edition lay on "President Roosevelt's bedside table, with key passages, including an analysis of the president's peace initiative, underscored" (William Manchester's The Last Lion, Volume II, p.305).

The British first edition saw only a single printing of 5,000 copies published on 24 June 1938.  Of these, at least 3,381 and perhaps more than 4,000 were sold with a distinctive pale blue first state dust jacket. 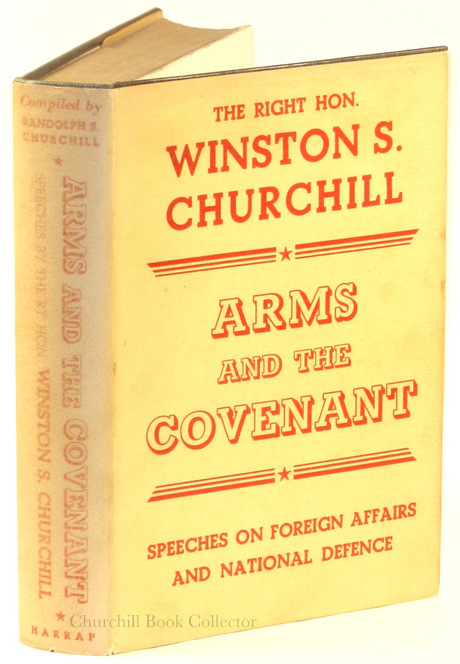 The balance - no more than 1,619 copies and quite likely fewer - were offered at a lower price in June 1940 bearing a striking yellow dust jacket.  Because the price was reduced with the yellow dust jacket, this has often been called by bibliographers the "Cheap" issue.  Given that Churchill had just become Prime Minister in May 1940, we submit it might be more fittingly and flatteringly called the "I Told You So" issue.  The yellow dust jackets were issued on heavy, yellow laid paper printed red on the front face and spine with a blank rear face and rear flap.  Given the yellow paper and red print, they obviously proved quite susceptible to soiling and the red spine lettering is nearly always quite faded.  Today these yellow, wartime dust jackets are exceedingly rare and considerably more scarce than their pale blue first issue counterparts. 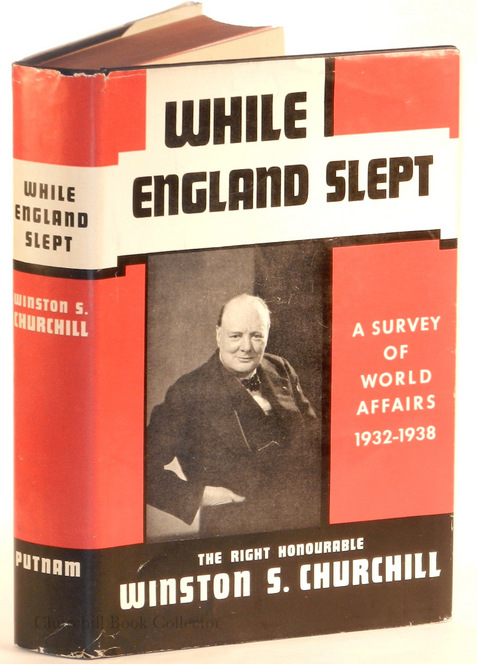 London: George G. Harrap & Co. Ltd., 1938. First Edition, only printing. Hardcover. This book is the precursor to Churchill’s great war speeches, the first edition, only printing. This particular copy is increasingly scarce thus, in the first issue dust jacket. Condition is compelling, both volume and jacket approaching near..... More New York: G.P. Putnam’s Sons, 1938. 1st Edition. Hardcover. This is the precursor to Churchill's great war speeches. This is the first U.S. edition, first printing in dust jacket. The British first edition was given the politically palatable title "Arms and the Covenant". The U.S. title is a bit more..... More