"... we may note the German imports of armament material... All this has gone into making the most destructive war weapons and war arrangements that have ever been known: and there are four or five millions of active, intelligent, valiant Germans engaged in these processes, working, as General Goering has told us, night and day. Surely these are facts which ought to bulk as large in ordinary peaceful peoples' minds as horse racing, a prize fight, a murder trial or nineteen-twentieths of the current newspaper bill of fare." 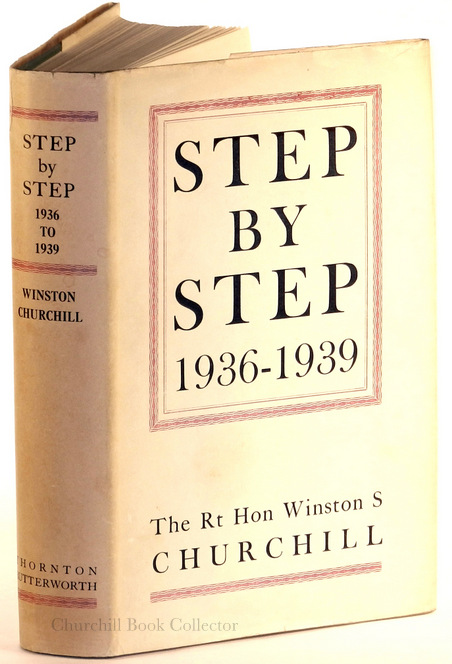 This important Churchill title - Churchill's last book published before the outbreak of the Second World War - includes 82 newspaper articles focused on foreign affairs written by Churchill between March 1936 and May 1939.  Many of them of course contain his warnings and predictions about Nazi Germany.

Step By Step was published in June 1939.  Only a few short months later, on September 1st 1939, Germany would invade Poland.  Churchill would be invited to join the War Cabinet, reprising his First World War role as First Lord of the Admiralty.  Less than a year after publication, in May 1940, Churchill would become Prime Minister.

As a measure of Churchill's prescience and ultimate vindication, upon publication, Labour leader Clement Attlee, a political opponent who would replace Churchill as Prime Minister in 1945, wrote to Churchill, "It must be a melancholy satisfaction to you to see how right you were."  Others were even more blunt.  Sir Desmond Morton, military officer, government official, and appeasement opponent, wrote to Churchill, "Many years on, historians will read this and your speeches in Arms and the Covenant.  They will wonder but I doubt they will decide what devil of pride, unbelief, selfishness or sheer madness possessed the English people that they did not rise as one man" and "call on you to lead them."

The British first edition is bound in a medium green cloth with gilt stamped spine.  The accompanying dust jacket is printed dark red and black on a very pale yellow-tan paper.  These dust jackets understandably proved quite susceptible to both spine toning and general soiling.  There were four printings of the British first edition, spanning June 1939 to January 1940.  Although not so noted by bibliographers, we can confirm from experience that the dust jackets for all four printings are identical. 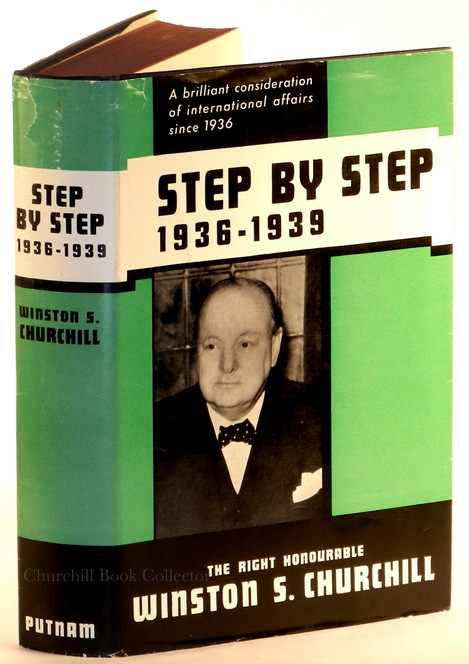 As a bit of irony or a poorly timed attempt at balanced perspective, the publisher used the rear flap of the U.S. edition dust jacket to advertise In Search of Peace by Prime Minister Neville Chamberlain.  The U.S. first edition was published by G. P. Putnam's Sons of New York on 25 August 1939, only a week before the German invasion of Poland and nine days before Great Britain declared war on Germany.

Although Churchill bibliographer Ronald Cohen notes only a single printing of the U.S. edition, we are aware of a second printing, also noted by Richard Langworth.