"...The bomb brought peace, but men alone can keep that peace,
and henceforward they will keep it under penalties which threaten the survival,
not only of civilization but of humanity itself.."

(Speech as Leader of the Opposition in the House of Commons, 16 August 1945) 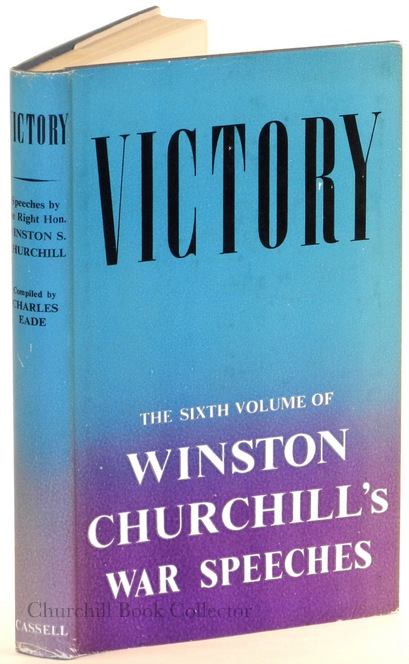 Victory is the sixth volume of Churchill's war speeches.  This volume publishes his speeches, broadcasts, messages, statements, a letter, and the text of the Crimea Declaration made, sent, and issued between 18 January and 16 August 1945.

Having done so much to win the war, Churchill faced frustration of his postwar plans when his wartime government fell to Labour in the General Election of July 1945.  His final speech in this volume - a review of the war delivered on 16 August 1945 to the House of Commons - is delivered as Leader of the Opposition rather than as Prime Minister.

This first major speech as Leader of the Opposition is in some ways difficult to read.  Now from the diminished position of Opposition, Churchill rings with a myriad of carefully phrased cautions and concerns, as he seeks to guide the domestic policies of a shattered postwar Britain and constructively influence the ominous shape of the postwar world while ensuring Britain's place within it.  Perhaps most concerning to Churchill was the swift and alarming curtailing of freedom throughout postwar Europe - freedom that the war had ostensibly been fought to preserve.

"Just as in the baleful glare of 1940, so now, when calmer lights shine, let us be united upon these resurgent principles and impulses of the good and generous hearts of men.  Thus to all the material strength we possess and the honoured position we have acquired, we shall add those moral forces which glorify mankind and make even the weakest equals of the strong."  As beautiful as these words remain, they sound more like a plea from the sidelines than a clarion call from a position of strength.  Perhaps predictably, this was a plea that went substantially unheeded as former allies - both within Britain and among the victorious nations - scrambled for interest and primacy. 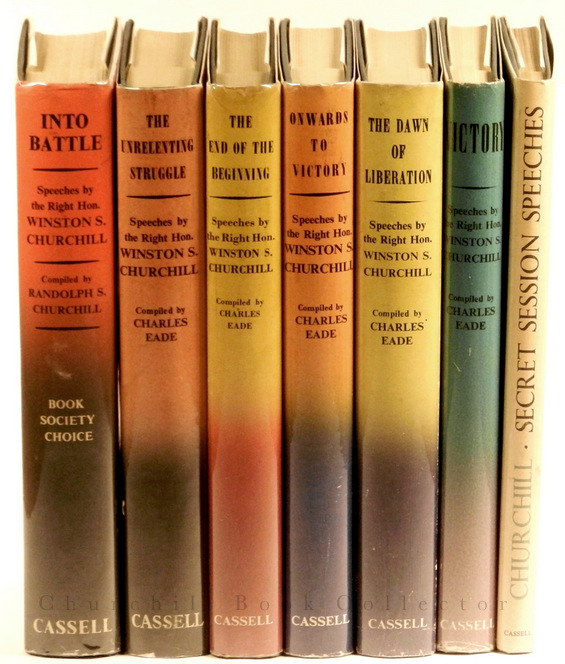 For this sixth volume, Charles Eade, Editor of the Sunday Dispatch, continued to compile Churchill's war speech volumes free of charge - a service he first volunteered in 1941 when Churchill's son and previous compiler, Randolph, was called into wartime service.

The first edition of Victory is bound in coarse, blue cloth.  The dust jacket is colored a deep turquoise on the upper half transitioning into a light purple on the lower half, with print in white and black.  There was only a single, June 1946 printing of the British first edition.  However, it should be noted that there were two states of this printing, the first 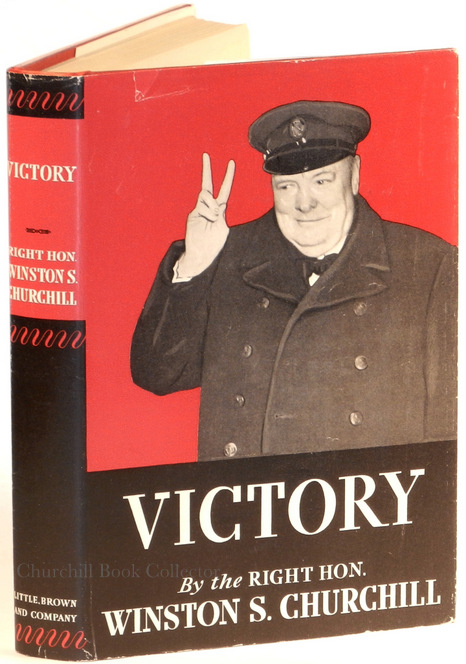 identified by page 177 being incorrectly numbered "77".  Collectors should also note that although all of the British first edition war speeches dust jackets proved prone to spine fading, perhaps none proved more so than Victory.  On nearly every copy we see, the lower half of the jacket spine appears more grey than purple. 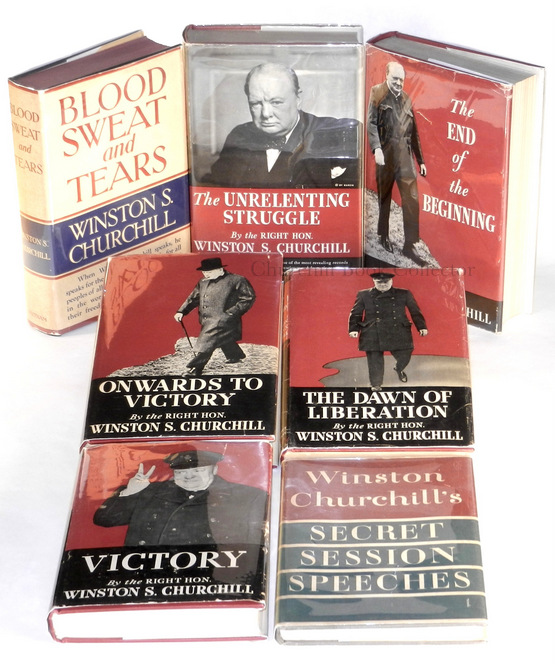 The U.S. first edition was published by Little, Brown and Company on 7 August 1946.  Churchill's abrupt change in electoral fortune certainly played a role in publication, with Little Brown expressing concern about what proportion of the speeches would be campaign speeches and stipulating that the publisher be authorized "to use our judgment in eliminating such campaign speeches as seem to us not sufficiently interesting to American public to include"   (Cable of 19 September 1945 per Cohen, Volume I, A223.2, p.690).

The U.S. first edition is bound in red cloth stamped in gilt with black title panels on the spine and front cover.  The illustrated dust jacket is printed red, black, and white with a photo of Churchill from the waist up wearing a navy pea coat and naval cap and giving the "V for victory" sign with his right hand.  There was just a single printing of the U.S. first edition, published in August 1946. Melbourne & Sydney: Cassell and Company Ltd., 1942. 1st Edition. Hardcover. This is a full set of Australian first editions of Winston Churchill's war speeches. During his long public life, Winston Churchill played many roles worthy of historical note - member of Parliament for more than half a century, distinguished..... More London: Cassell and Company Ltd., 1946. First edition, only printing. Hardcover. This is the British first edition, only printing, of the sixth volume of Churchill's war speeches. Both aptly and ironically titled Victory, this volume contains speeches, broadcasts, messages, statements, a letter, and the text of the Crimea Declaration made..... More London: Cassell and Company Ltd., 1946. 1st Edition. Hardcover. This is the sixth of Churchill's seven war speech volumes, containing speeches from January to August 1945. Having done so much to win the war, Churchill faced frustration of his postwar plans when his wartime government fell to Labor in the..... More