By Winston S. Churchill
First published between 1948 and 1953 by Houghton Mifflin Company, Boston

"In War: Resolution
In Defeat: Defiance
In Victory: Magnanimity
In Peace: Goodwill"

(The "Moral of the Work" for Churchill's The Second World War) 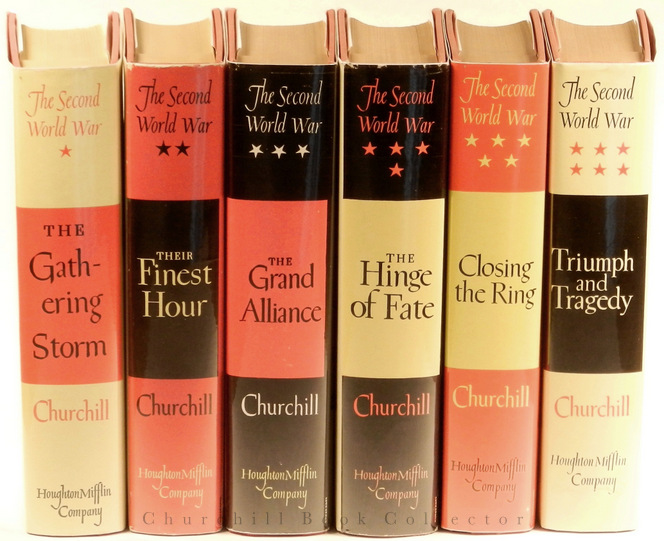 The "Moral of the Work" was first published in 1948 in Volume I of Churchill's six-volume history, The Second World War. The words appear prominently and alone on the page immediately following the author's Acknowledgements.

In a cynical post-war world slipping inexorably into a new Cold War, perhaps some  considered it banal or at least overly simplistic to ascribe any moral to the greatest conflict the world had yet seen.  Churchill did not.

Likely better than most, he well understood the often senseless and bloody chaos and vagaries inherent to the human condition.  Precisely "because we are so often mocked by the failure of our hopes and the upsetting of our calculations" did he recognize the vital role of purposeful resolve, reasoned defiance, and generous decency in public affairs, and of "rectitude and sincerity" in personal conduct   (from Churchill's gracious wartime eulogy of his great pre-WWII political nemesis, Neville Chamberlain).

The "Moral" testifies to both Churchill's own statecraft and to the failures of statecraft that precipitated the Second World War and would unfortunately persist in its wake.

The words also trace a vital arch underpinning Churchill's political thought and character and spanning his public life.  The guiding sentiments encapsulated by the "Moral" allowed Churchill, for all his reputed pugnacity, to achieve farsighted perspective and bridge material, empathetic, and intellectual differences throughout his long life.

As early as 1906, Churchill expressed his thought in similar terms, "As we have triumphed, so we may be merciful; as we are strong, so we can afford to be generous" (21 March 1906 speech in the House of Commons).

According to Churchill's Private Secretary and close associate, Eddie Marsh, Churchill first composed what became his "Moral of the Work" soon after the First World War as "a lapidary epigram on the spirit proper to a great nation on war and peace"  (Marsh, A Number of People, p.152).  As a tremendously fitting commentary on the failures of the victors to secure the post-WWI peace, Churchill was asked to pen an inscription for a French First World War memorial, but "The inscription was not accepted"  (My Early Life, p.346).

Churchill "had seen the danger of another war with Germany even before the first had entered its final phase.  In articles published in both America and Britain during 1917, he insisted even then on far-reaching efforts to meet those German demands that were justifiable"  (Woods, Artillery of Words, p.86).

On 23 November 1919, only a year after Armistice Day and certainly long before the bitter sentiment of the victors had faded, Churchill wrote in the Illustrated Sunday Herald, "The reconstruction of the economic life of Germany is essential to our own peace and prosperity.  We do not want a land of broken, scheming, disbanded armies, putting their hands to the sword because they cannot find the spade or the hammer."  Churchill's warnings would be substantially ignored by the victors.  Fourteen years later a defeated and desperate Germany would elect Adolph Hitler.

Churchill's moral and pragmatic consistency as a statesman did not waver. In September 1946, in the wake of the war in which he was perhaps Germany's most implacable foe, Churchill would tell assembled European leaders: "The first step in the re-creation of the European family must be a partnership between France and Germany ... There can be no revival of Europe without... a spiritually great Germany." (Speech of 19 September 1946 at Zurich Universtiy advocating pan European integration to the embryonic Council of Europe)

As with so much of what Churchill wrote, The Second World War is not "history" in the strictly academic, objectivist sense, but rather Churchill's perspective on history.  In his March 1948 introduction to the first volume, Churchill himself made the disclaimer, "I do not describe it as history... it is a contribution to history..."

Nonetheless the compelling fact remains, as stated by Churchill himself, "I am perhaps the only man who has passed through both the two supreme cataclysms of recorded history in high Cabinet office... I was for more than five years in this second struggle with Germany the Head of His Majesty's government.  I write, therefore, from a different standpoint and with more authority than was possible in my earlier books."

Certainly The Second World War may be regarded as an intensely personal and inherently biased history.  Nonetheless, Churchill's work remains seminal, iconic, and a vital part of the historical record.  Richard Langworth calls the six-volume epic "indispensable reading for anyone who seeks a true understanding of the war that made us what we are today."

Churchill vexed his publishers with seemingly endless corrections and clarifications.  It is often said that the U.S. publisher, Houghton Mifflin, ran out of patience with Churchill first.  However, Churchill's Bibliographer Ronald Cohen attributes the precedence of the U.S. publication to less romantic reasons "legal and financial, and not at all editorial." Irrespective of the reason, the first U.S. volume, The Gathering Storm, was published 21 June 1948, making the U.S. edition the true first edition.  The sixth and final U.S. first edition volume, Triumph and Tragedy, was published during Churchill's second and final Premiership in November 1953.

The U.S. first editions are issued in a uniform red cloth stamped black and gilt.  The colorful dust jackets are all printed in the same style, with a colored dust jacket and contrasting color spine title panel.  Although the style is consistent, the jacket and title panel colors vary considerably with each volume.  All six U.S. first edition dust jackets proved susceptible to fading, but particularly volumes I, II, and V.

The second problem is the fact that the U.S. first edition is very similar in appearance to the concurrent Book-of-the-Month Club (BOMC) edition.  The consequence is that many BOMC editions are passed - sometimes by accident, sometimes not - as first editions.  First printings of the first edition should generally be distinguished by $6.00 prices on the dust jacket flaps, publication dates at the foot of the title pages, yellow-stained top edges, head and foot bands, and lack of a BOMC indentation on the rear cover.  There is a multitude of small variations in particulars given the large print run.  There are also rear flap differences between first and later state first printing dust jackets for Volumes I & II.

A Canadian issue followed, offprinted from the U.S. edition, with Volume I published the same day as its U.S. counterpart.  The Canadian first editions closely follow the appearance of the U.S. first edition.  The volumes are bound in a darker red cloth, with the Canadian publisher - Thomas Allen - at the foot of the spines.  The Canadian issue dust jackets are the same, apart from white panels on most at the foot of the jacket spines printed "THOMAS ALLEN LIMITED" within.  As with the U.S. edition, there was apparently also a Canadian Book Club issue. 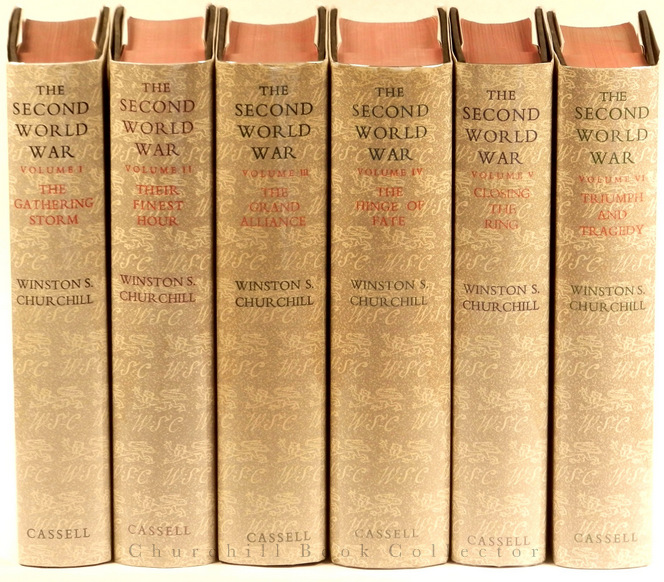 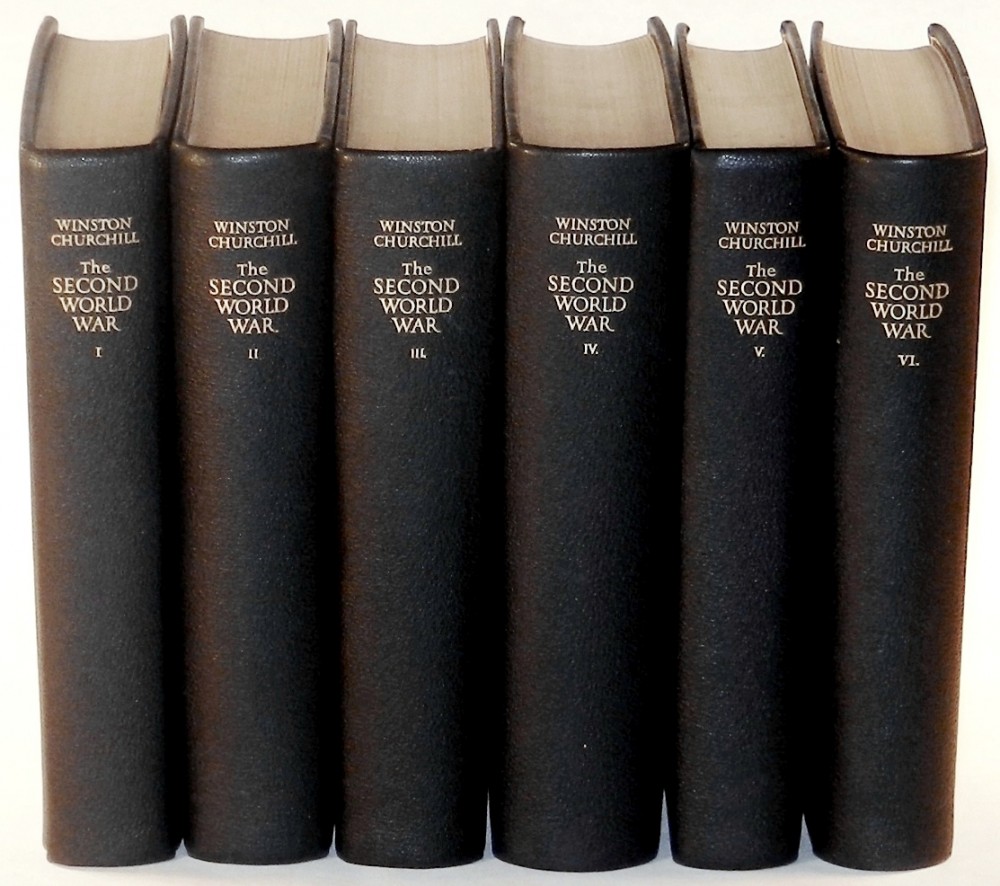 Of special note are a reported 100 publisher sets, noted by Frederick Woods as "bound by Cassell in full black pebble-grain morocco for presentation." These are elegantly handsome, with first printing contents including original trade edition endpapers, gilt on the top edge, head and foot bands, gilt ruled turn-ins, and gilt author, title, and volume number spine print. Such sets are quite scarce and coveted.

We have offered a particularly noteworthy such set, inscribed by Cassell's Director Sir Newman Flower with an accompanying note by him dated 25 October 1948 reading: "Cast forth your Churchill volume! Cast it forth and, please accept this one! Each of the three Directors of Cassells has now received six copies which Winnie had bound in leather, and I should like you to have one of them. Whether this leather binding is going to be continued by Winston in his later vols. I don't know. If so, I should wish you to have one of each out of my portion. If not, I will make some arrangement." It is worth regarding that this note from a Cassells Director accompanying Volume I might appear to question both the number of copies issued and whether they were bound by the author or the publisher. 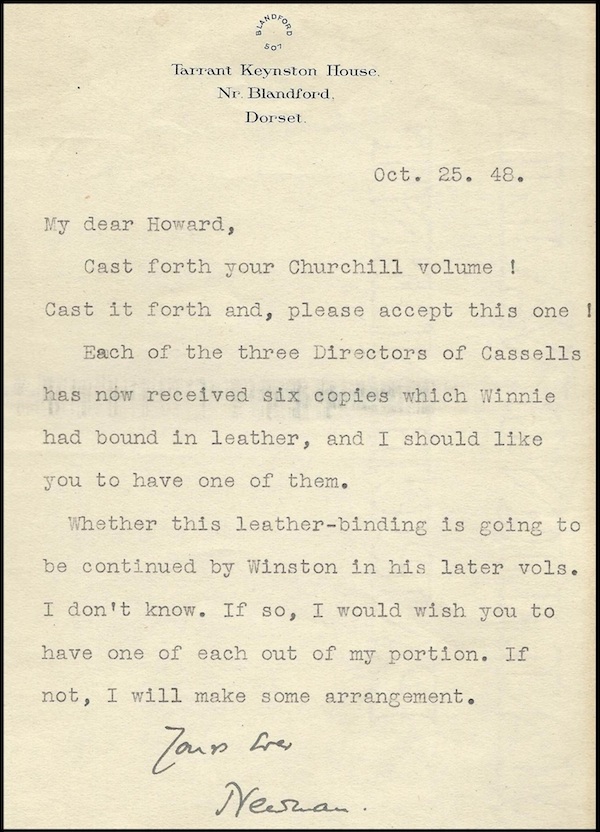 An Australian edition was issued from British plates.  Ronald Cohen notes that "The plates were actually struck in Australia from British moulds, initially because of the paper shortage faced by Cassell in England, and the first five volumes were printed and bound by the Halstead Press Pty Ltd of Sydney."  (Cohen, Vol. I, A240.5, p.776).  As the Canadian issue closely echoes the U.S., so the Australian closely echoes the British.  The bindings are a textured black shiny cloth with unstained top edges.  Since the Australian paper is thicker stock, the volumes are thicker.  The dust jackets are as the British with Australian prices.

As may be imagined for such an iconic work, there is a profusion of later but collector worthy unabridged editions.  We will not discuss them all here, but one that commands mention is the so-called "Chartwell Edition."

Churchill made revisions and corrections between the publication of the U.S. and British first editions, and continued to do so until issuance of this first illustrated edition in 1955, which was pronounced by Churchill as "being illustrated for the first time, in which all those first minor errors have been corrected.

The Chartwell Edition is eminently readable and aesthetically pleasing, superior in production value to the first edition in all respects.   It was offered by Cassell in two bindings.  The "Standard Binding" features red buckram with spine labels and front cover portraits in black leather, gilt rules and stamping, head and foot bands, red-stained top edge, and red endpapers.  The "De-Luxe Binding" (pictured) is bound in quarter blue morocco over blue cloth boards with beveled edges, head and foot bands, blue-stained top edge, and marbled endpapers. 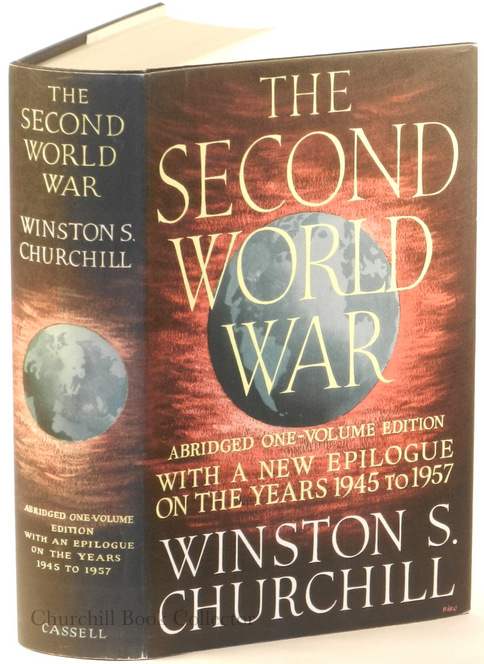 In 1959 a substantial abridged one-volume edition was published.  This edition merits mention because it was not merely an abridgement, but a bibliographically significant work containing Churchill's last original writing for a book publication. Specifically for the edition Churchill wrote a 10,000 word Epilogue on the years 1945-1957 - years which include Churchill's second Premiership.

The British first edition was published in February 1959 as "The Second World War with A New Epilogue on the Years 1945 to 1957."  The binding vaguely echoes that of the unabridged first edition, being a smooth black cloth with stamped gilt.  The dust jacket is 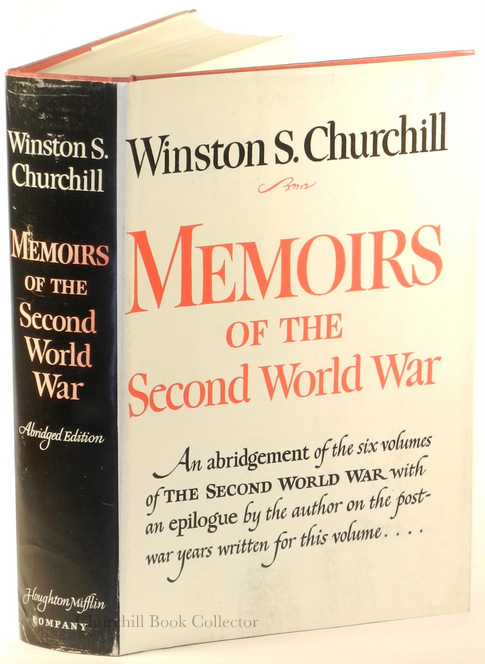 unique, printed yellow, white, red, and blue on a black background, illustrated on both spine and covers with a globe set against a red haze.

The U.S. first abridged edition was titled "Memoirs of the Second World War".  This U.S. first edition also incorporates some textual differences from the British edition.  The binding for the first printing shows two distinctly different variants - a red cloth that closely conforms to the style of the unabridged U.S. first editions, and a distinctly different green cloth in the same style, but stamped red and gilt with red topstain.  The first printing red cloth binding can be found either with or without topstain and headbands.  The first printing dust jacket is uniform, with a black spine, white faces, and print in white, red, and black.  We have encountered first printing dust jackets with both an $8.75 and $9.00 front flap price. London: Cassell and Company Ltd., 1954. Proof copy of the first edition. Paperback. This is a publisher’s proof copy of the British first edition of the sixth and final volume of Winston Churchill’s history of the Second World War. This copy comes to us from the collection of British book..... More