By Winston S. Churchill
First published in 1961 by Cassell and Company Ltd., London

"We are entitled to fix our thoughts on the might, and I think I may say majesty,
of the unwritten alliance which binds the British Commonwealth and Empire
to the great Republic of the United States.
It is an alliance far closer in fact than many which exist in writing...
We have history, law, philosophy, and literature; we have sentiment and common interest...
We are often in agreement... and we stand on the same foundation..." 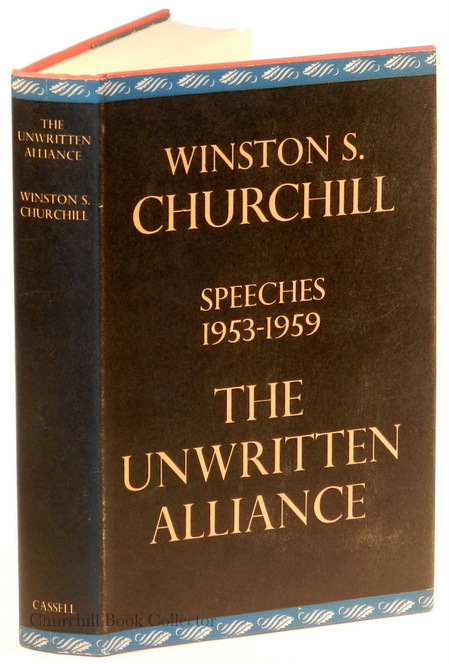 This is the fifth and final volume of Churchill's five postwar speech volumes.  The Unwritten Alliance includes 70 speeches delivered by Churchill between 30 January 1953 and 31 October 1959.

These speeches span the end of Churchill's second and final term as Prime Minister and the twilight of his long life and public career.  The bulk of the speeches - 43 of 70 and 250 of 332 pages - take place during Churchill's premiership, after which Churchill spoke comparatively rarely.

In the British General Election of October 1951 the Conservatives won 321 seats to Labour’s 295, returning Churchill to Downing Street at the age of 77.  He remained Prime Minister until April 1955, and remained a Member of Parliament, albeit in a progressively frail and diminished capacity, until 1964.

The Unwritten Alliance takes its name specifically from Churchill's 8 June 1954 speech and more generally from the "special relationship" between Britain and the United States, which had endured postwar disagreements.  Randolph wrote in his introduction to the volume that the title was "justified by the number of speeches which dwell on the paramount necessity of Anglo-American friendship."

In the final speeches of this volume, Churchill "passes from the making of history and the writing of history" to befitting new experiences including the unveiling of a statue of himself and the founding of a college in his honor. 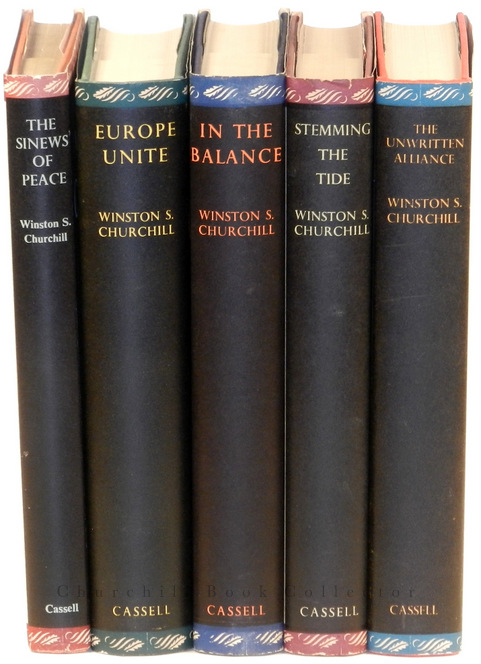 The times in which Churchill made these speeches were no less formidable than the skills and experience he brought to bear.  Churchill's five post-WWII speech volumes span the period from Demobilization in late 1945, when Churchill was Leader of the Opposition, through his second Premiership, into a time when Churchill passes "into a living national memorial" of the time he has lived and the Nation, Empire, and free world he has served. The events encompassed by these years are in many ways no less dramatic than those of the war years - the unraveling of the British Empire, the post-war recovery, the onset of the Cold War, Soviet acquisition of the atomic bomb, development of the hydrogen bomb, both Cold and proxy war between the Western and communist powers, and the beginning of the space age.

These postwar speech volumes are much scarcer than Churchill’s War Speeches volumes; each of these five books had only a single printing.  The five British first editions of the postwar speeches are uniform in height and were issued in striking black dust jackets with a border along the top and bottom of the jacket featuring a repeating white oak leaf design.  The background color for the oak leaf border and the spine and front cover print color vary with each volume.  The dust jacket rear faces and flaps are white, printed black.  The bindings are bound in a simple, uniform style, but vary in cloth color.

The British first edition of The Unwritten Alliance is bound in orange cloth stamped gilt on the spine.  The dust jacket features a teal blue background for the oak leaf border and is printed in light orange.  Publication was 27 April 1961, with a single printing of 5,000 copies.

Collectors should note that the dust jackets for The Unwritten Alliance were notoriously poorly printed, and consequently are almost always rubbed or streaked, with orange showing through the black background.

The Unwritten Alliance had no U.S. edition.  Consequently a full set of U.S. postwar speeches ends with Stemming the Tide and comprises only four volumes.

London: Cassell and Company Ltd., 1948. First edition, only printing. Hardcover. Here is a jacketed set of all five of Churchill's post-WWII speech volumes, increasingly challenging to assemble thus. These volumes span the period from Demobilization in late 1945, when Churchill was Leader of the Opposition, through his second Premiership..... More London: Cassell and Company Ltd., 1948. First edition, only printing. Hardcover. Here is a jacketed set of all five of Churchill's post-WWII speech volumes, increasingly challenging to assemble thus. These volumes span the period from Demobilization in late 1945, when Churchill was Leader of the Opposition, through his second Premiership..... More London: Cassell and Company Ltd., 1948. 1st Edition. Hardcover. Here is a quite respectable full, jacketed British first edition set of all five of Churchill's post-WWII speech volumes. These volumes span the period from Demobilization in late 1945, when Churchill was Leader of the Opposition, through his second Premiership (1951-1955)..... More

I was very glad that Mr. Atlee described my speeches in the war as expressing the will... of the whole nation... It was a nation and race dwelling all round the globe that had the lion heart. I had the luck to be called upon to give the roar. I also hope that I sometimes suggested to the lion the right places to use his claws