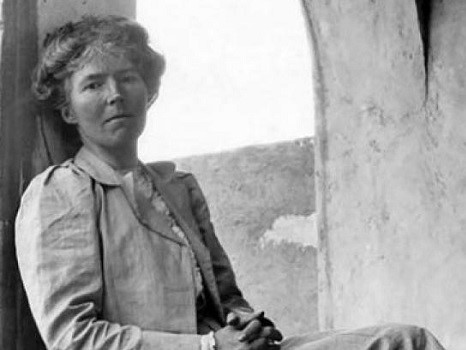 Gertrude Margaret Lowthian Bell, CBE (1868-1926) was the intriguing and influential adventurer, scholar, writer, and diplomat who, like her contemporary T. E. “Lawrence of Arabia” did much to frame and shape the Middle East during and after the First World War.

Raised amid the wealth of her industrialist grandfather, Bell lost her mother at age three, increasing a “sense of independence and self-reliance” perhaps already inherent to the “physically restless and intellectually gifted” child. By her mid-twenties the unmarried Bell discovered intellectual and emotional fascination with the Middle East. “Outstanding literary and linguistic skills” coupled with “determination, bravery, physical strength, and endurance” invigorated contributions to travel literature, translation, archaeology, and architecture, eventually evolving into engagement in the region’s socio-political currents.

After joining the Arab Bureau in Cairo in 1916, Bell was annexed to the military intelligence department in Basrah and charged with gathering information on the movements of Bedouin tribes in central Arabia and in the Sinai Peninsula. Her articles for Hogarth’s Arabian Report and the famous Arab Bulletin ranked among “the best sources of information on the events in the Middle East during the war.” When the Turks lost Baghdad in early 1917, Bell engaged in Mesopotamia’s civil administration. She became oriental secretary under the British high commissioner when an Arab provisional government was established in Baghdad in late 1920, a post she held until her death in 1926 from a sleeping pill overdose.

Bestowed monikers testify to Bell’s deep connection to the Middle East. Bell’s informal honorifics included “El Khatun” (the Lady of the Court) and “Umm al Mu’mineen” (Mother of the Faithful). She would eventually be known to western audiences as the “uncrowned Queen of the Desert”.

Bell is often compared to T. E. Lawrence, who became known as “Lawrence of Arabia”. Both Bell and Lawrence were emotionally wrought and wrenched by their engagement in the Middle East, ultimately frustrated in many of their hopes and ambitions for its peoples. Both died comparatively young. Both have become historically intermingled with their own legends, the person often eclipsed and obscured by the persona. Both were gifted writers and left us with their own words, by which they are best understood and regarded.

Similarities aside, Bell merits an identity and recognition separate from Lawrence. Her published writings range from translated poetry to travelogue to trenchant appraisal and analysis to engaging correspondence. Her own words provide the means by which her remarkable life and work is best understood and regarded.