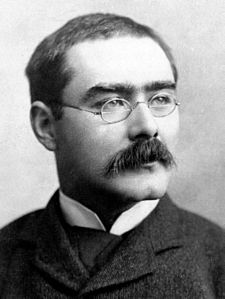 Joseph Rudyard Kipling (1865-1936) was an English poet, short-story writer, and novelist chiefly remembered for his celebration of British imperialism, stories and poems of British India, and his tales for children. Despite this reputation, Kipling’s extraordinary body of work “eludes all labels in its range and variety… Kipling's work is not only of the highest artistic excellence, it is deeply humane and fully expresses the sense of one of his favourite texts: ‘Praised be Allah for the diversity of his creatures.’”(ODNB)

Born in India, Kipling cut his literary teeth there as a newspaper editor and writer, and India’s vividness and vitality clearly proved indelible, both for the author and his readers. Kipling was in his twenties when his stories of Anglo-Indian life made him a literary celebrity, and he was awarded the Nobel Prize in Literature in 1907 “in consideration of the power of observation, originality of imagination, virility of ideas and remarkable talent for narration which characterize the creations of this world-famous author.” He was the first English language author awarded and remains the youngest person to receive the Nobel Prize in Literature.

Kipling’s writing has sometimes been dismissed as rooted in an Empire sensibility that became archaic even before his death. Befitting the transmogrifications Kipling suffered at the hands of Disney films, this is a nearly cartoonish simplification of Kipling’s work - and a disservice to a keen, versatile, and even subversive literary presence.

A broader view of Kipling might see him at his best as an English Euripides, a voice at once both quintessentially of his culture and yet essentially, observationally, compellingly apart, subtly weaving beautifully dissonant patterns in the traditional fabric.

Moreover, Kipling’s literary voice had a remarkable range. “There has yet been no writer of short stories in English to challenge his achievement, which ranges through space from India to the home counties, and through time from Stone Age man to the contemporary world of football matches and motor cars. These stories exhibit every kind of treatment, from the farcical to the tragic, and … vary from the simplest anecdote to the most complex and allusive philosophical fiction…” (ODNB)

Like Kipling himself, his characters are often “Other” to themselves more than to place or to one another. Kipling lived the second half of his life far from India, which he left in 1899. And certainly the sum of Kipling is more than a subcontinent. But, much like Robert Frost in New England woods, it is in the tangled banyan roots of India where we find Kipling especially “lovely, dark and deep”.