London to Ladysmith via Pretoria

"How unhappy is that poor man who loses his liberty!
What can the wide world give him in exchange?
No degree of material comfort, no consciousness of correct behaviour,
can balance the hateful degradation of imprisonment.
Before I had been an hour in captivity ... I resolved to escape."

(London to Ladysmith via Pretoria, p.179)

London to Ladysmith via Pretoria is the first of Churchill's two books based on his dispatches sent from the front in South Africa. 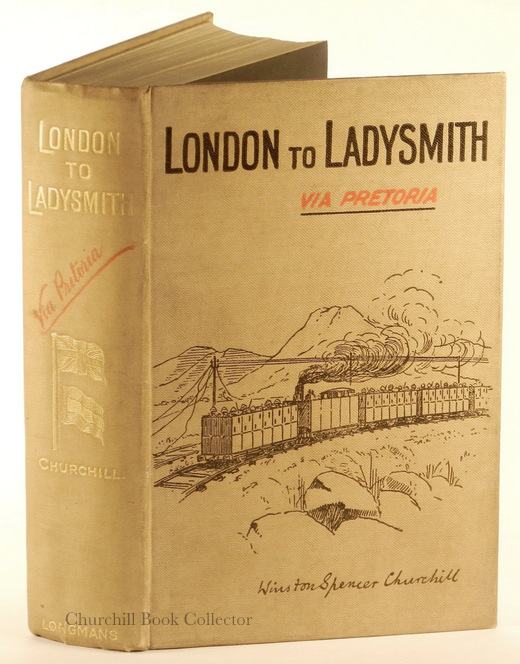 In October 1899, the second Boer War erupted in South Africa between the descendants of Dutch settlers and the British.  Churchill, an adventure-seeking young cavalry officer and war correspondent, swiftly found himself in South Africa with the 21st Lancers and an assignment as press correspondent to the Morning Post.  Not long thereafter, on 15 November 1899, Churchill was captured during a Boer ambush of an armored train.  His daring escape less than a month later made him a celebrity and helped launch his political career.

London to Ladysmith via Pretoria contains 27 letters and telegrams to the Morning Post written between 26 October 1899 and 10 March 1900.  It was published in England on 16 May 1900 and sold well, with a first printing of 10,000 copies swiftly followed by a second printing of an additional 5,000.  Churchill returned from South Africa in July 1900 and spent the summer campaigning hard in Oldham, where he won his first seat in Parliament on 1 October 1900 in the so-called "khaki election".

The British first edition is striking, bound in tan cloth with an illustration of an armored train on the front cover accompanied by the author's facsimile signature. The spine features the Union and Transvaal flags in gilt beneath a red subtitle.  While these bindings proved quite susceptible to soiling and toning, they make a visually arresting first edition.  The first printing features black endpapers and numerous maps and plans including three folding maps, one in color.  An advertisement for the second printing of The River War and The Story of the Malakand Field Force is bound in at the rear, as is a 32-page publisher's catalogue.

The text is arresting and notable for being published swiftly without significant alteration of the original dispatches and before history could enfold either the events related or the author's perspective.  Interestingly, it was published so swiftly that Churchill could not reveal many details about the methods and people involved in his escape. 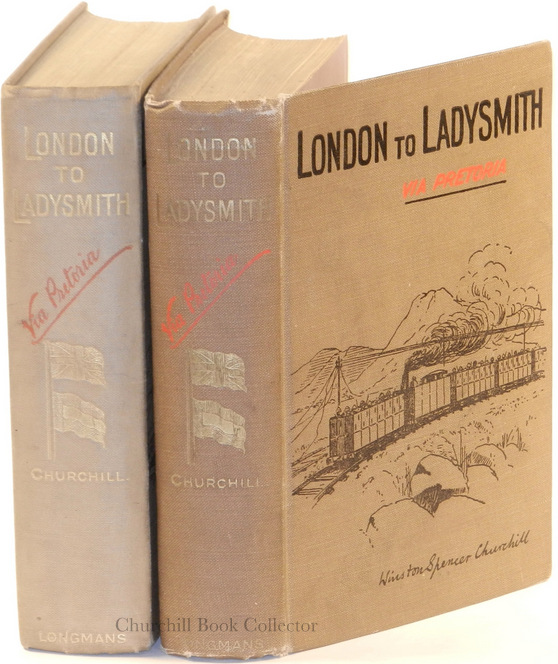 Churchill bibliographer Ronald Cohen notes a rarely seen binding variant of the second printing in a distinctly different yellowish-brown cloth with white endpapers and no rear catalogue.  Pictured here, it offers a marked contrast to the typical first and second printing bindings.  This particular copy offers an interesting further difference; the original endpapers are neither black nor white, but a distinctive brown we have not previously seen.  Cohen estimates that only 375 copies possessed this variant binding.  The brown endpapers are previously unknown.  The variant binding pictured is also noticeably shorter than its first printing counterpart. 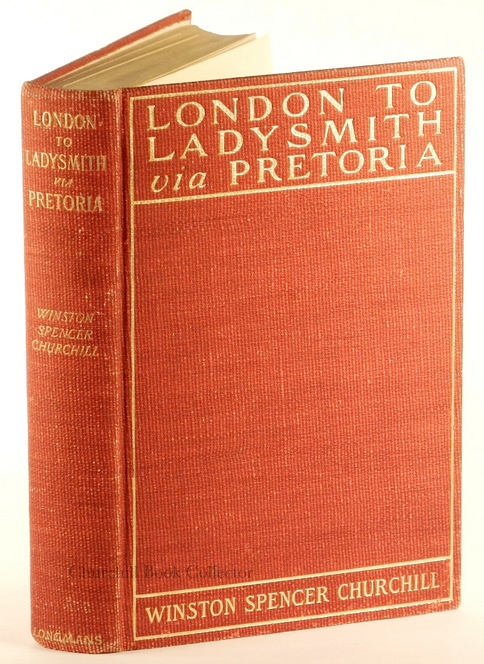 Published in June 1900, the U.S. first edition is both less numerous and less glamorous than its British counterpart.  There was just a single printing, with no more than an estimated 1,850 copies sold.  The American edition is bound in pebble grain red buckram which proved durable yet susceptible to blotchy wear and discoloration particularly on the spine.  It is worth noting that the U.S. first editions of both of Churchill's Boer War books - London to Ladysmith via Pretoria and Ian Hamilton's March - are bound identically, making an attractive pair on a shelf.  In contrast, the British first editions of each differ considerably in appearance.

A Canadian issue of American sheets was also produced.  This was bound in tan cloth with an illustrated front cover like its British counterpart, and is easily distinguishable by a red fleur-de-lis on the spine, thinner binding, and black title and author print. London: Longmans, Green, and Co., 1900. First edition, first printing. Hardcover. Imagine it is November 1961. Winston S. Churchill is almost 87 years old. You write a long and earnest letter to him, seeking his signature. “Amongst books written by you, I am the proud possessor of your “LONDON TO..... More London: Longmans, Green, and Co., 1900. 1st Edition. Hardcover. This is Churchill's fourth book and the first of his two books based on his newspaper despatches sent from the front in South Africa. This one relates the exciting story of his capture by the Boers and the subsequent daring escape..... More New York: Longmans, Green, and Co., 1900. First U.S. edition, only printing. Hardcover. This is a quite respectable copy of the U.S. first edition of Churchill's fourth published book. London to Ladysmith via Pretoria is the first of Churchill's two books based on his newspaper despatches sent from the front..... More