My Early Life / A Roving Commission

"The Head-master, Mr. Welldon... took a broad-minded view of my Latin prose... This was the more remarkable, because I was found unable to answer a single question in the Latin paper. I wrote my name at the top of the page. I wrote down the number of the question 'I'. After much reflection I put a bracket round it thus '(I)'. But thereafter I could not think of anything connected with it that was either relevant or true. Incidentally there arrived from nowhere in particular a blot and several smudges. I gazed for two whole hours at this sad spectacle: and then merciful ushers collected my piece of foolscap with all the others and carried it up to the Head-master's table. It was from these slender indications of scholarship that Mr. Welldon drew the conclusion that I was worthy to pass into Harrow."

(Churchill on his Entrance Examination to Harrow, My Early Life, p.29) 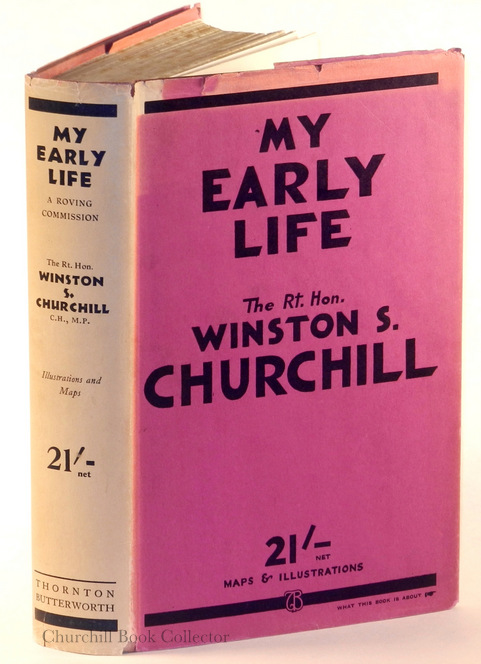 Originally published on 20 October 1930, My Early Life is Churchill's extremely popular autobiography, covering the years from his birth in 1874 to his first few years in Parliament.

One can hardly ask for more adventurous content.  These were momentous and formative years for Churchill, including his time as a war correspondent and cavalry officer in theatres as varied as Cuba, northwest India, and sub-Saharan and southern Africa.  This time contained a wide range of experiences in Churchill’s life.  Not only was he developing as an author, publishing his first books, and making his first lecture tour of North America, but this was also the time of his capture and daring escape during the Boer War, which made him a celebrity and helped launch his political career.  Churchill would take his seat in Parliament only weeks after the end of Queen Victoria's reign.

My Early Life remains one of the most popular and widely read of all Churchill's books.  And for good reason, as the work certainly ranks among the most charming and easy to read of his many books.  An original 1930 review likened it to a "beaker of Champagne."  That effervescent charm endures; a more contemporary writer called it "a racy, humorous, self-deprecating classic of autobiography."

To be sure, Churchill takes some liberties with facts and perhaps deceptively lightens or over-simplifies certain events, but this is eminently forgivable and in keeping with the wit, pace, and engaging style that characterizes the book.

My Early Life sold very well at the time and has seen a great many editions since, many of them collectible in their own right, but of course a premium attaches to first editions.

The British first edition was issued in a bright plum colored cloth binding and a matching vivid plum dust jacket.  It should be noted that first editions of My Early Life feature a dizzying array of states and binding variants that can confuse collectors.

The first edition, first printing, first state, first binding state, as identified by Bibliographer Ronald Cohen, is bound in coarse cloth with the title and author's name in three lines on the front cover and 11 Churchill titles on the half-title verso boxed list of "WORKS BY THE SAME AUTHOR" (lacking "THE WORLD CRISIS: 1911-1914").  Additional states of the first edition, first printing may feature smooth instead of coarse binding cloth, five lines on the front cover instead of three, and 12 Churchill titles on the half-title verso instead of the first state's 11.  For second state copies, a cancellans half-title is provided.  Despite the bibliographic precedence of first and second states, it should be noted that both states of the first printing were clearly pre-publication; we are aware of at least two second state copies inscribed by Churchill six days before the date of publication (To Neville Chamberlain and to Max Beaverbrook). 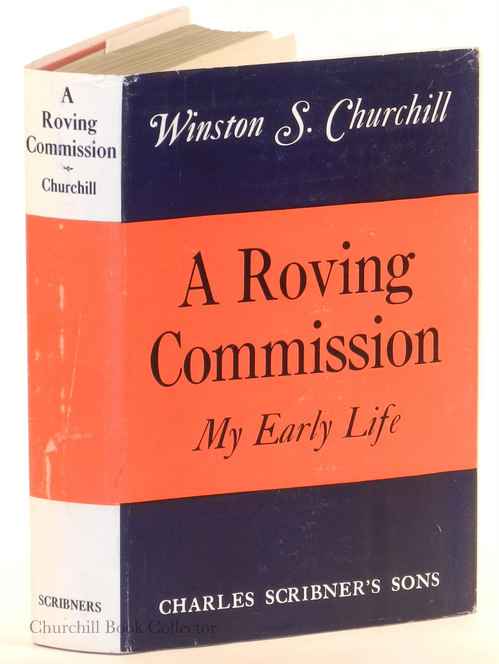 The similarity between the U.S. and British first editions is fragility and scarcity.  Like its British counterpart, both the cloth and dust jackets of the U.S. first edition proved highly susceptible to fading and soiling, and superior copies are now scarce.

Worth mentioning to round out the English language first editions is the odd case of the Canadian version of My Early Life.  The actual books sold in Canada were identical to British first editions.  The only difference was the accompanying dust jackets, which had a price of "$4.50" on the lower spine and "Thomas Nelson and Sons, Ltd." printed above the British publisher "Thornton Butterworth." ...if I found the right words you must remember that I have always earned my living by my pen and by my tongue.