By Winston S. Churchill
First published in 1898 by Longmans, Green, and Co., London

"...the great frontier war had begun.  The noise of firing echoed among the hills... One valley caught the waves of sound and passed them to the next, till the whole wide mountain region rocked with the confusion of the tumult.  Slender wires and long-drawn cables carried them to the far-off countries of the West.  Distant populations on the Continent of Europe thought that in them they detected the dull, discordant tones of decline and fall.  Families in English homes feared that the detonations marked the death of those they loved - sons, brothers or husbands.  Diplomatists looked wise, economists anxious, stupid people mysterious and knowledgeable."

(The Story of the Malakand Field Force, p.47) 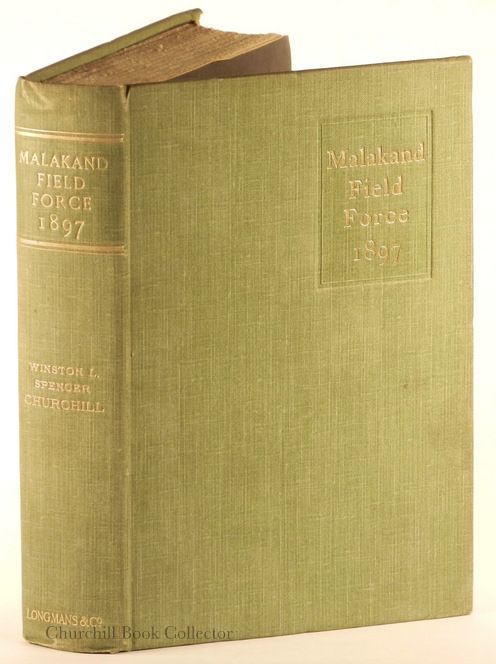 This is Churchill's first book, based on his exploits with Sir Bindon Blood's expedition on the Northwest Frontier of India in 1897.

When this book was written and published, Churchill was a young cavalry officer.  While he had successfully applied his pen as a war correspondent - indeed the book is based on his dispatches to the Daily Telegraph and the Pioneer Mail - this was his first book-length work.

The young Churchill was motivated by a combination of pique and ambition.  He was vexed that his Daily Telegraph columns were to be published unsigned.   On 25 October 1897 Churchill wrote to his mother: "...I had written them with the design... of bringing my personality before the electorate."  Two weeks later, his resolve to write the book firming, Churchill again wrote to his mother of the book project: "...It is a great undertaking but if carried out will yield substantial results in every way, financially, politically, and even, though do I care a damn, militarily."

Having invested his ambition in this first book, he clearly labored over it: "I have discovered a great power of application which I did not think I possessed. For two months I have worked not less than five hours a day."  The finished manuscript was sent to his mother on the last day of 1897 and published on 14 March of 1898.

The first edition, Home Issue, is bound in medium green cloth with gilt stamped spine print, spine title box horizontally framed with gilt rules, and a blind stamped title box on the upper right front cover with gilt stamped title within.  The contents are bound with black endpapers, as well as a tissue-protected frontispiece and two folding maps at pages 1 and 146.  Some copies were bound with protective tissue at the folding maps.  Home Issue copies also bear a 32-page Longmans, Green catalogue bound in at the back, which is dated either "12/97" or "3/98" at the foot of page 32.

With only a few more than 1,900 copies bound, this first edition of Churchill's first book is both elusive and desirable.  Moreover, it is one of the few Churchill books that did not have a concurrent U.S. first edition. 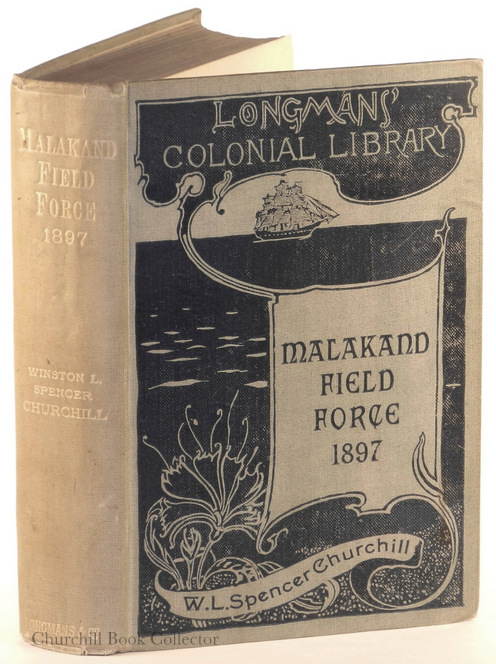 In a hurry to achieve publication and unable to review proofs while in India, Churchill asked that his uncle, Moreton Frewen, "undertake the work of revising and correcting."  This Churchill swiftly came to regret, as the result was numerous spelling and factual errors.  Churchill was incensed by the errors and acted with haste to address them. Hence later states of the first edition bear errata slips with 13 corrections.  Presence or lack of the errata slip distinguishes first from second state copies.

Two other early editions bear mention in addition to the first edition - the Colonial Library issue and the Silver Library Edition.  Both are collectible in their own right.

The publisher printed distinctive Colonial Library issues simultaneously with the first edition.  These were bound both in paper wraps (for understandable reasons, few examples of the wraps binding survive) and in a hardcover cloth binding with the striking Longmans Colonial Library design featuring a schooner at sea filling the front cover.  While the first edition saw only one printing, the Colonial Library issued no fewer than 10 different editions, printings, and binding variations for the very small number of Colonial issues ultimately produced from 1898 to 1901.

Of these 10 variations, by far the fewest in number was a Colonial Library binding of just 46 sets of domestic first edition sheets (which differ substantially from all other Colonial edition sheets).  The best example of these precious few and one of only three copies known to survive is pictured here. 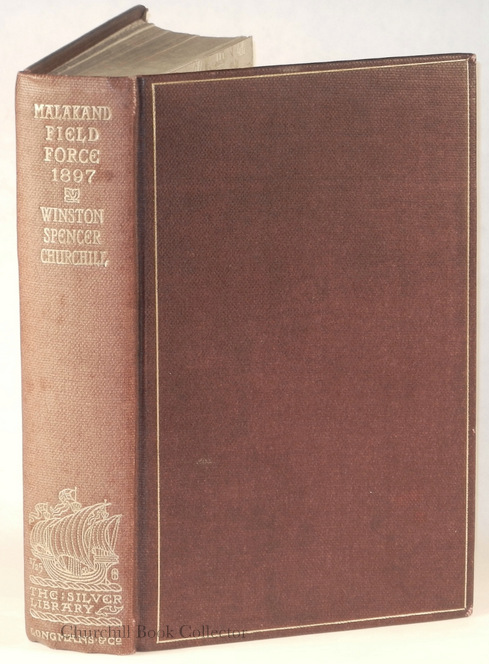 In part because of the errors in the first edition which so vexed Churchill, the publisher also issued a second edition less than a year after the first in January 1899.  For this Silver Library Edition, extensive corrections were made, reportedly requiring "196 hours of printer's labour".  These Silver Library editions are bound in a reddish-brown cloth with distinctive endpapers featuring a design of swans and ships between ivy leaves, like all Longmans Silver Library titles.