"I cannot pretend to feel impartial about the colours.
I rejoice with the brilliant ones, and am genuinely sorry for the poor browns.
When I get to heaven I mean to spend a considerable portion of my first million years
in painting, and so get to the bottom of the subject.
But then I shall require a still gayer palette than I get here below.
I expect orange and vermillion will be the darkest, dullest colours upon it,
and beyond them there will be a whole range of wonderful new colours
which will delight the celestial eye." 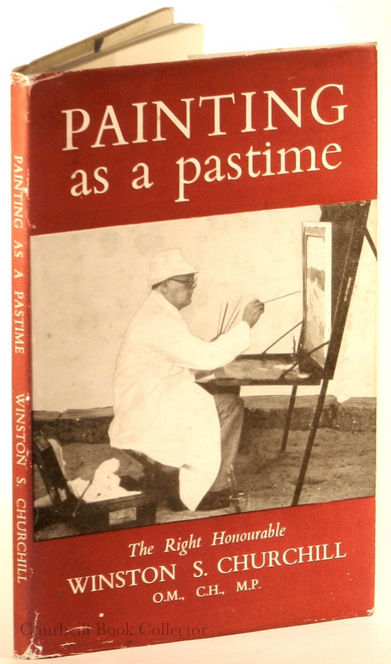 Painting as a Pastime first appeared as a two-part essay published in Strand Magazine in December 1921 and January 1922, respectively titled "Hobbies" and "Painting as a Pastime."  Richard Langworth reports that the piece subsequently appeared in various parts and excerpts in several periodical publications in 1925, 1926, and 1930 and in The Hundred Best English Essays in 1929.  The first appearance in a collected volume by Churchill was in Thoughts and Adventures in 1932, again split into two separate pieces as in the original Strand Magazine appearance.  It was not until 1948 - nearly three decades after his first published words on the subject - that Churchill consented to a book about his hobby and passion.

Interestingly, it was the U.S. publisher of Churchill's war speeches, Little, Brown and Company, that in October 1945 first suggested an individual volume publication.  Approaching both Churchill and his British publisher at the time (Cassell), Little, Brown and Company promised, "...we should be proud to do it and would go out of our way to get first-rate colour reproductions." Churchill flatly dismissed the offer in January 1946, evincing no interest in a volume publication, stating, "nothing doing" (Cohen, Volume I, A242.1.b, pages 871-72).  Nonetheless, three and half years later just such a volume would be published by Odhams Press Limited.

Soldier, writer, and politician, Churchill was perhaps an unlikely painter.  Nonetheless he proved both a prolific and passionate one.  Churchill first took up painting during the First World War.  May 1915 saw Churchill scapegoated for failure in the Dardanelles and slaughter at Gallipoli and forced from his Cabinet position at the Admiralty.  By November 1915 Churchill was serving at the Front, leading a battalion in the trenches.  But during the summer of 1915, as he battled depression, he rented Hoe Farm in Surrey, which he frequented with his wife and three children.  One day in June, Churchill noticed his brother's wife, Gwendeline, sketching in watercolors.  Churchill borrowed her brush and swiftly found solace in painting, which would be a passion and source of release and renewal for the remaining half century of his long life.

Churchill's preferred medium was oil on canvas and his preferred subject landscapes, but his work was hardly just casual or amateur.  Artist Sir John Lavery said, "Had he chosen painting instead of statesmanship, I believe he would have been a great master" (Winston Churchill: His Life as a Painter by Mary Soames).  He painted as often and as seriously he could, taking lessons from accomplished painters and producing well over 500 paintings.

A combination of natural talent and modesty that perhaps escaped Churchill in other facets of his life marked his painting.  He first exhibited under a pseudonym, sold none for any purpose other than charity, and gave paintings "to people he admired and wanted to honour with the most personal of gifts" (Churchill By Himself, Richard Langworth).

Apart from Painting as a Pastime, Churchill's remarks about the subject are comparatively few.  This atypical modesty may explain why. Churchill was rarely stinting with words on any subject that interested him, so it might seem inevitable that Churchill would fruitfully marry his two passions, painting and writing. However, this was not so.  At least one obstacle was his wife, Clementine.  Their daughter, Mary, records that when Churchill first wrote his articles for Strand Magazine, Clementine "was in principle opposed," concerned that it would cause Winston "to be discussed trivially" by both professional painters and others  (Winston Churchill: His Life as a Painter by Mary Soames).

Clementine aside, it may be that Churchill's comparative reticence on the subject was to keep something personal in the great and turbulent sweep of his otherwise tremendously public life.  He wrote, "Painting is a friend who makes no undue demands, excites to no exhausting pursuits, keeps faithful pace even with feeble steps, and holds her canvas as a screen between us and the envious eyes of Time or the surly advance of Decrepitude" (Painting as a Pastime).

The British first edition was published by Odhams Press Limited in December 1948.  Five additional printings followed in 1949 (both second and third printings), 1962, and 1965.  Churchill Bibliographer reports that the publisher produced 25,000 first printing copies.

The first edition was bound in pale yellowish-green cloth gilt stamped on both the front cover and spine.  The first edition includes full color reproductions of 18 of Churchill’s paintings.  The dust jacket features a dark reddish-purple background on both the front face and spine.  Between wide horizontal reddish-purple bands of color on the front face is a black and white photo of Churchill painting at his easel, wearing glasses and white smock and hat.  The rear cover is white, printed in dark reddish-purple and bordered with rules of the same color.

Despite a British first printing of 25,000 copies, truly fine first edition copies are scarce, owing perhaps to the diminutive size and comparative fragility of the volume as well as its popularity.

The U.S. first edition was published in February 1950.  Though made from slightly trimmed British sheets, it is externally quite 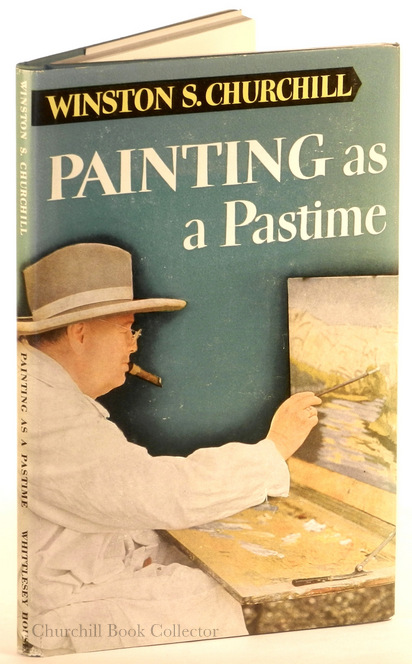 different in appearance from the British first edition.  Of note to collectors, three binding variants and two different publisher variants have been observed among U.S. first edition, first printing copies.  The U.S. first edition binding is found in either a dark blue-green, deep blue, or blackish cloth, all gilt stamped on the spine.  The binding spines, as well as the dust jacket spines, can bear the imprint of either Whittlesey House or McGraw-Hill.

The striking U.S. dust jacket features a blue-grey background on the front face and spine on which appears a color illustration of Churchill seated at his easel, painting on a canvas, bespectacled and sporting cigar, broad-brimmed hat, and smock.  This illustration wraps onto the spine.  The white rear panel bears a color image of Churchill's painting "Near Antibes".