By Winston S. Churchill
First published in 1899 by Longmans, Green, and Co., London

"... it was evident that they [the Dervishes] could not possibly succeed...
Nevertheless... they rode unflinchingly to certain death....
The valour of their deed has been discounted by those who told the tale.
'Mad fanatacism' is the depreciating comment of their conquerors.
I hold this to be a cruel injustice.... Why should we regard as madness in the savage
what would be sublime in civilised men?
I hope that if evil days should come upon our own country, and the last army
which a collapsing Empire could interpose between London and the invader
were dissolving in rout and ruin, that there would be some
- even in these modern days -
who would not care to accustom themselves to a new order of things
and tamely survive the disaster."

(Churchill reflecting on the Battle of Omdurman, Volume II, p.162) 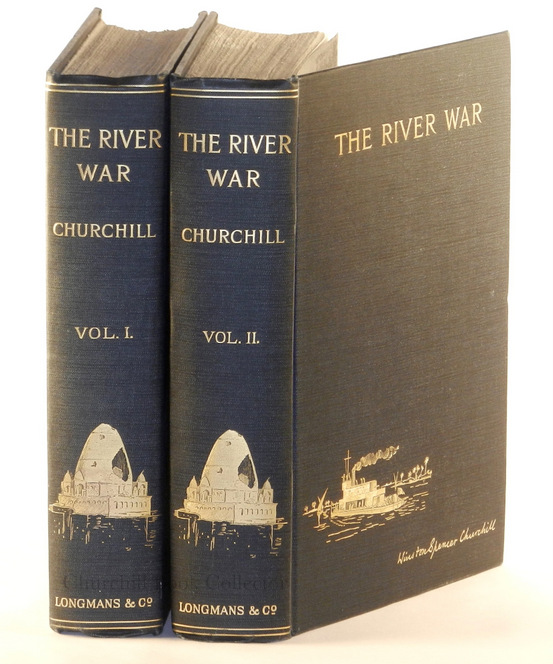 Published in two massive volumes in 1899, the first edition of Churchill's second book is compelling in every respect.

First, of course, is the inherent merit of the work itself.  The text is arresting, insightful, powerfully descriptive, and of enduring relevance. As a young officer in a colonial British army, Churchill is unusually sympathetic to the Mahdist forces and critical of the British army. This work offers us the candid perspective of the future great man of the 20th century from the distinctly 19th century battlefields where Churchill learned to write and earned his early fame. Here is a chief architect of the Second World War involved in what has been called by some the last "genuine" cavalry charge of the British army.

In addition to being a compelling piece of writing, the first edition of The River War is also beautiful, rare, and bibliographically important.  Aesthetically it is lavish and striking; the large, weighty volumes are beautifully decorated with gilt representations of the Mahdi's tomb on the spines and a gunboat on the front covers.  Each of the two large volumes is printed on heavy paper with a profusion of illustrations, maps, and plans.

From a collector's standpoint it is scarce.  There were only 2,657 copies of this beautiful edition, and this number includes both second (503 copies) and third printings (151 copies).   Moreover, this is one of the few Churchill books for which there was no concurrent U.S. first edition.  Bibliographically it is notable that the first edition was the only unabridged edition for more than 120 years. 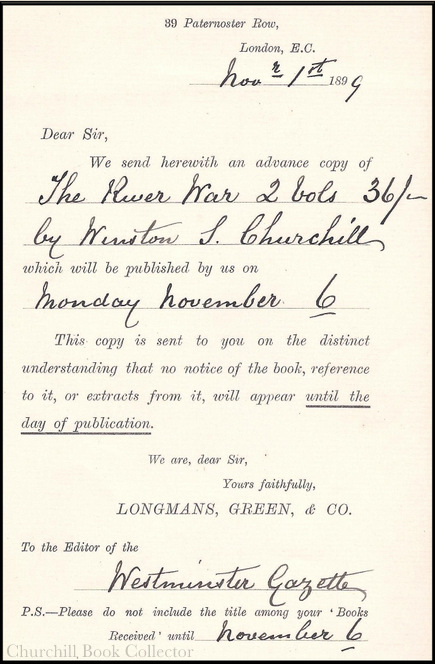 Churchill Bibliographer Ronald Cohen cites a publication date of 6 November 1899, which we are able to substantiate with the publisher's review slip from the Westminster Gazette review copy of the first edition.

The first edition, first printing featured black endpapers and many copies were bound with a Longmans, Green catalogue at the rear of Volume I.  In his excellent bibliography, Ronald Cohen speculates that "copies without a catalogue were destined for sale in either the American or other overseas markets."  However the aforementioned Westminster Gazette review copy also lacks the volume I rear catalogue.  There are two states of the first edition, distinguished by a single inverted comma missing on page 459 of Volume II, which has been corrected on most first printing copies.

Beautiful pale yellow dust jackets with dark blue print reproducing the print and illustrations of the front cover and spine were apparently issued on first edition copies, but the only known surviving examples are those of a spectacular third printing set, which in addition to the dust jackets also bears the author's inscription dated by him "25. August. 1900." 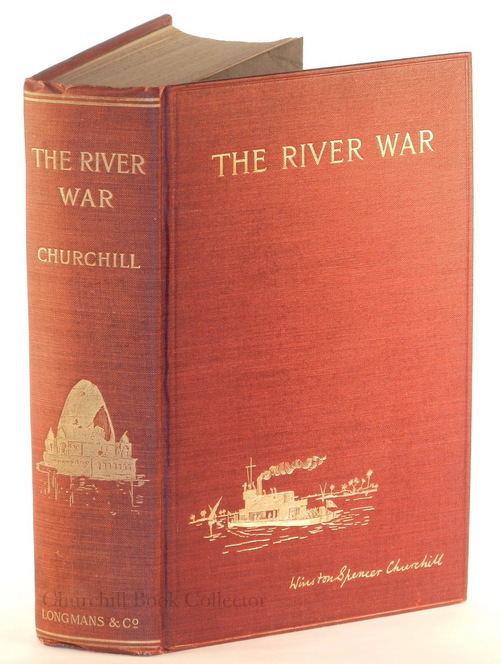 In 1902 Churchill (then a new Member of Parliament) revised and abridged his text, excising much of his criticism of Kitchener for political reasons. Until the publication of the St. Augustine’s Press edition, all of the many subsequent editions of The River War were based on this 1902 abridged and revised text.

Because it was significantly revised and because all subsequent editions to date are based on this text, this 1902 first abridged and revised edition is bibliographically important.  It is also quite desirable to collectors as this first one-volume edition had only a single printing of just 1,003 copies, making it scarce - particularly in collector-worthy condition.  This edition has the same distinctive gilt decoration of the Mahdi's Tomb and gunboat as the first edition, but is bound in red cloth. 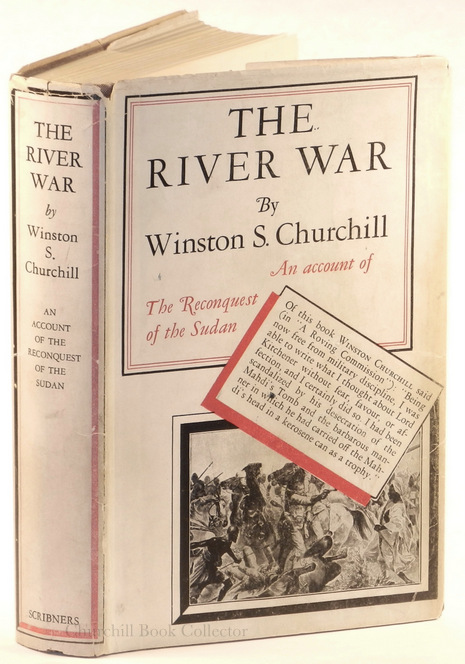 In 1933 a new edition was issued in both England by Eyre & Spottiswoode and the U.S. by Scribners with a bibliographically significant new introduction by the author explaining that "A generation has grown up which knows little of why we are in Egypt and the Sudan."

This 1933 edition is the first U.S. edition, and is both distinctive and desirable.  Copies are bound in lilac cloth identical to their 1933 English counterparts, and it is speculated that binding was done in England, using English sheets and a Scribners title page.  However, the striking dust jacket is unique to this U.S. first edition, printed in red and black and bearing R. C. Woodville's dramatic illustration of the Charge of the 21st Lancers.