By Winston S. Churchill
First published in 1908 by Hodder and Stoughton, London

"The aspect of Mombasa as she rises from the sea and clothes herself with form and colour at the swift approach of the ship is alluring and even delicious.  But to appreciate all these charms the traveller should come from the North.  He should see the hot stones of Malta, baking and glistening on a steel-blue Mediterranean.  He should visit the Island of Cypress before the autumn rains have revived the soil, when the Messaoria Plain is one broad wilderness of dust, when every tree - be it only a thorn-bush - is an heirloom, and every drop of water is a jewel..." 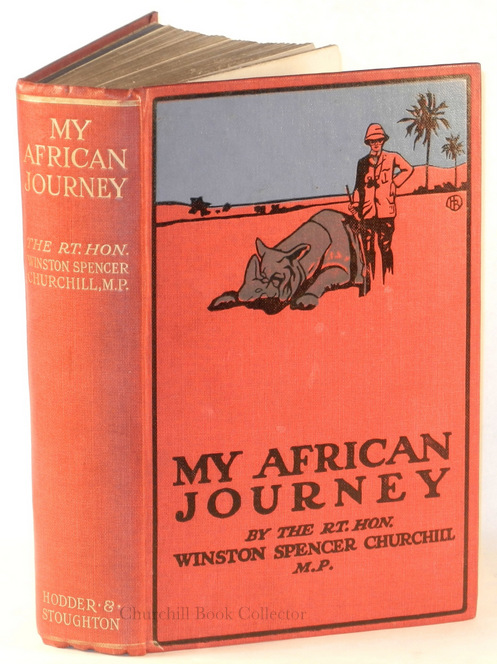 My African Journey is Churchill's travelogue on Britain's possessions in East Africa, written while he was serving as Undersecretary of State for the Colonies under Lord Elgin.  This book is notable, among other reasons, for being the only one of his many books to contain photographs allegedly taken by the author.

The British first edition is striking, with a vivid red binding and a prominent front cover bearing a woodcut illustration in blue, grey, and black of Churchill with his bagged white rhinoceros.  The first edition includes 3 maps and 61 photographs on 47 plates.

The red cloth spine proved exceptionally vulnerable to sunning and the lovely books seem to have attracted handling, making wear and soiling the norm.  Spotting is also endemic.  Truly bright and clean copies are scarce.  Moreover, since the photographic plates of this edition were tipped in rather than bound, copies should always carefully collated to ensure the presence of all illustrations and maps.  We have encountered many copies with loose or missing plates.

In the summer of 1907 Churchill left England for five months, making his way after working stops in southern Europe to Africa for "a tour of the east African domains."  Churchill enjoyed a proper 19th Century bwana experience, traveling by special train provided by the Uganda Railway, receiving tribute from various chiefs, and shooting all manner of things.  On 6 November Churchill wrote to his mother that at Simba "the first day I killed I Zebra, I wildebeeeste, two hartebeeste, I gazelle, I bustard (a giant bird)."  On the third day Churchill would kill a rhinoceros, the basis of the striking illustration on the front cover of the British first edition of his eventual book.

From Aden and then to Mombassa, Churchill traveled up-country.  Churchill's trip included stops at Nairobi, Lake Victoria, Kampala, the Ripon Falls, Gondokoro, and, after a journey by both train and steamer, Khartoum, followed by Wadi Halfa, Aswan, Cairo, and thence home. 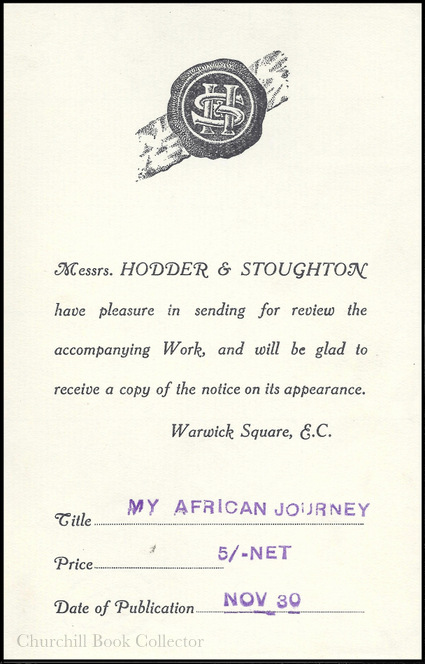 By now a seasoned and financially shrewd author, Churchill arranged to profit doubly from the trip, first by serializing articles and then by publishing a book based substantially upon them.  Nine articles on his African journey were published in Strand Magazine from March to November 1908.  In November 1908 Hodder and Stoughton published My African Journey as a book.  While Churchill's Strand articles make up the bulk of the book, the last two chapters plus an additional paragraph in Chapter X did not appear in Strand and the book is 10,000 words longer than the serialized articles. 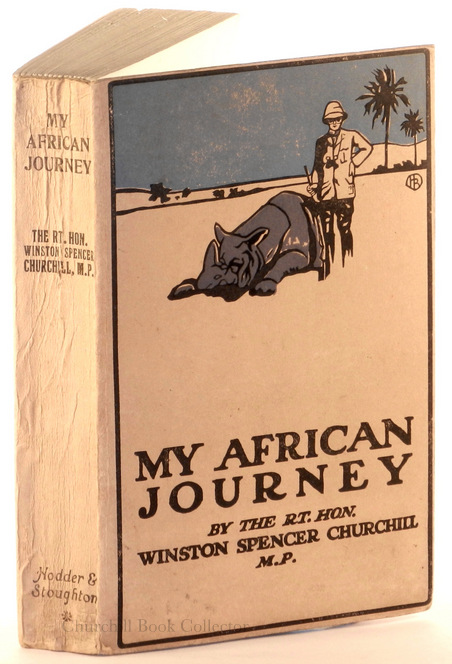 A Colonial issue of My African Journey took two forms.  A hardbound Colonial issue is differentiated from the British first edition solely by the presence of a gold asterisk at the heel of the spine.  A rare wraps Colonial issue is another matter entirely.  Such copies are internally identical to the hardbound first edition, but bound instead in tan card wrappers bearing the same color illustration on the front cover (in blue and black).  Churchill bibliographer Ronald Cohen maintains that only 903 copies of this softbound variant produced for the colonial market were sold.  As might be imagined, the survival rate is exceptionally low for a 1908 book in card wraps destined for the harsher climates of the British colonies.  We have seen or heard of less than half a dozen examples of this particular issue, placing it squarely in the ranks of the very rarest Churchill first editions.  The copy pictured here is the best surviving example of which we are aware.

The first U.S. edition is far less aesthetically appealing than its British counterpart, but compensates by being far more scarce, with only 1,400 copies sold (encompassing all three states), in contrast to more than 8,000 copies of the more frequently seen British first edition. 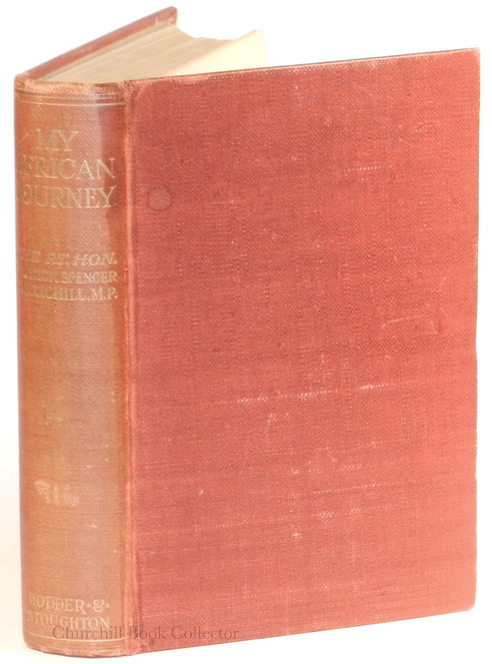 as the British first edition, differing only in the addition of a second, thin horizontal gilt rule at the top and bottom of the spine.  Compounding the aesthetic deficiencies, the cloth proved highly susceptible to fading and mottling of the color; nearly all remaining copies show spine sunning.

Three states of the U.S. first edition are differentiated by variations in the publisher name and location at the foot of the title page. The first state mentions only "HODDER AND STOUGHTON" at the foot of the title page, with "LONDON" and the publication date in Roman numerals below.  The second state omits the publication date, but adds "NEW YORK AND" to "LONDON."  The third state mentions only the U.S. Publisher "GEORGE H. DORAN COMPANY" and "NEW YORK".

An extremely rare Canadian edition was issued in 1909 in Toronto by William Briggs, differentiated from the British first edition only by the Canadian publisher’s name at the foot of the spine and title page.