By Winston S. Churchill
First published in 1941 by Cassell and Company Ltd., London

"...nothing surpasses 1940.
By the end of that year this small and ancient Island...
had proved itself capable of bearing the whole impact and weight of world destiny.
We had not flinched or wavered.  We had not failed." 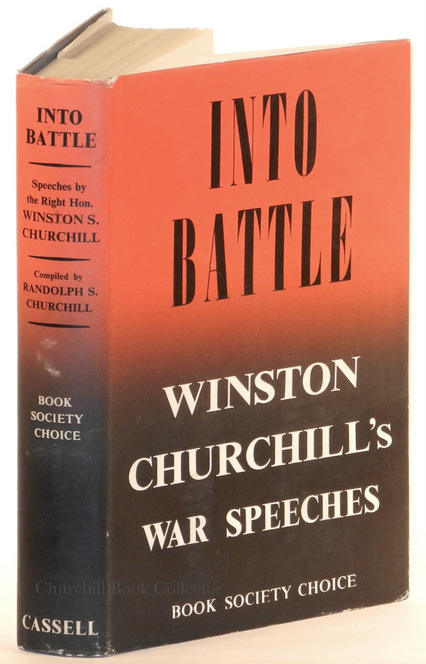 Into Battle is the first volume of Churchill's famous war speeches, containing speeches from May 1938 when Churchill was still out of favor and out of power, to November 1940, six months after Churchill became wartime Prime Minister.

During his long public life, Winston Churchill played many roles worthy of note - Member of Parliament for more than half a century, soldier and war correspondent, author of scores of books, ardent social reformer, combative cold warrior, painter, Nobel Prize winner. But Churchill's preeminence as a historical figure owes most to his indispensable leadership during the Second World War, when his soaring and defiant oratory sustained his countrymen and inspired the free world.

Of Churchill, Edward R. Murrow said, "He mobilized the English language and sent it into battle." Between 1941 and 1946, Churchill's war speeches were published in seven individual volumes.  In this first war speeches volume the great battle of the Twentieth Century and Churchill's life begins. 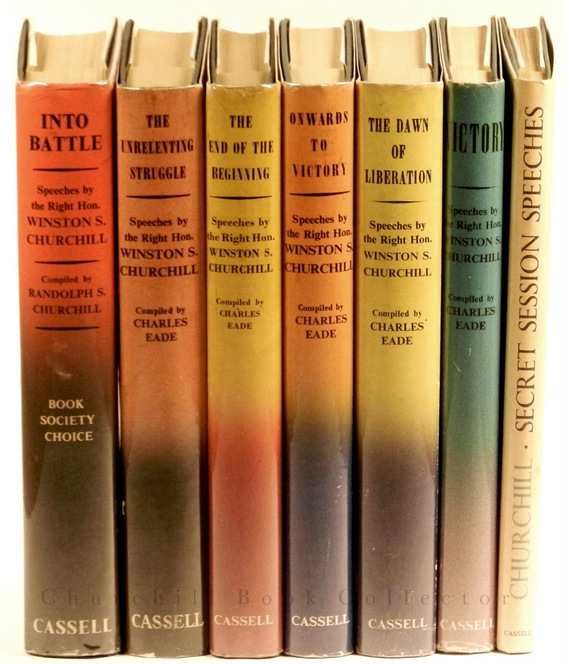 The seven British first editions of Churchill's wartime speech volumes were all issued by the same publisher and of uniform height and binding (with minor variations).  The accompanying dust jackets featured a consistent style for the first six volumes, which varied only in color scheme.  The first editions are visually striking, but were printed on cheap wartime paper, bound in coarse cloth with thin boards beneath, and the dust jackets were likewise printed on thin paper. Hence the first editions proved highly susceptible to spotting, soiling, fading, and wear, so the passage of time shows on most surviving copies.

Into Battle is the first of Churchill's many works published by Cassell and Company.  After much debate, the title was settled by Kathleen Hill, Churchill's private secretary, who commented on "Into Battle" in a 27 November 1940 memorandum that it "seems to describe the book most accurately."

The first printing of Into Battle is found bound either in the more common coarse cloth or a smoother blue cloth.  In our experience, the smoother cloth variant is associated with the first state of the first printing, which is distinguished by missing pagination on pages 78 and 294.  Unique to the first printing is absence of Churchill's 3 September 1939 House of Commons address, which was mistakenly omitted from the first printing but included in the second and successive printings.

The dust jacket is colored a strong orange-red on the upper half transitioning into charcoal on the lower half, with print in white and black.  Collectors should note that the first printing and second printing dust jackets are the same, but differ from later printings, with subsequent changes to flap content.  The reference to "BOOK SOCIETY CHOICE" on the jacket spine is correct for the first edition.

The U.S. first edition is the last of Churchill's first editions published by G. P. Putnam's Sons.  Published as Blood, Sweat, and Tears, it is also one of the few Churchill first editions for which the U.S. edition bears a different title than the British. 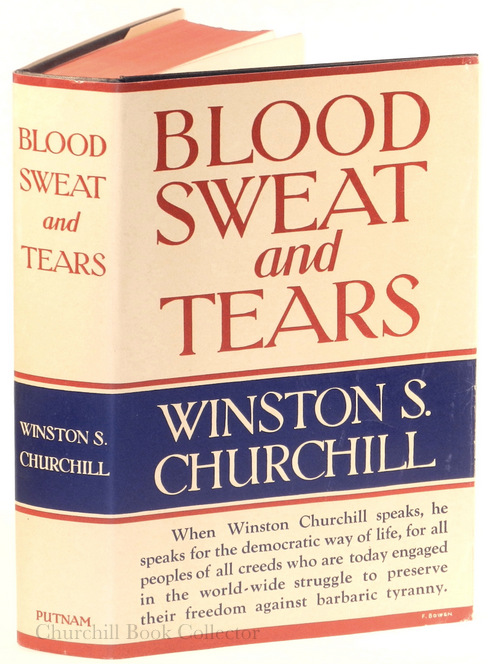 In his first speech to Parliament as Prime Minister on 13 May 1940, Churchill stated plainly, as he had told his Cabinet earlier that day, "I have nothing to offer but blood, toil, tears and sweat."  This is the famous phrase from which the U.S. first edition takes its title.

The U.S. first edition is bound in smooth navy cloth with red banners and silver print and red-stained top edge in the same style as the preceding U.S. first editions of Great Contemporaries (1937), While England Slept (1938), and Step By Step (1939).  However, the dust jacket departs radically from the uniform style of these three titles and is printed in bold red and blue on tan paper.  The dust jacket rear panel is illustrated with a portrait drawing of Churchill by K. S. Woerner printed in blue.

Confusion seems to persist in distinguishing Book-of-the-Month Club (BOMC) editions from first editions.  The volumes are easy to distinguish, the BOMC being bound in red cloth with a blue-stained top edge. 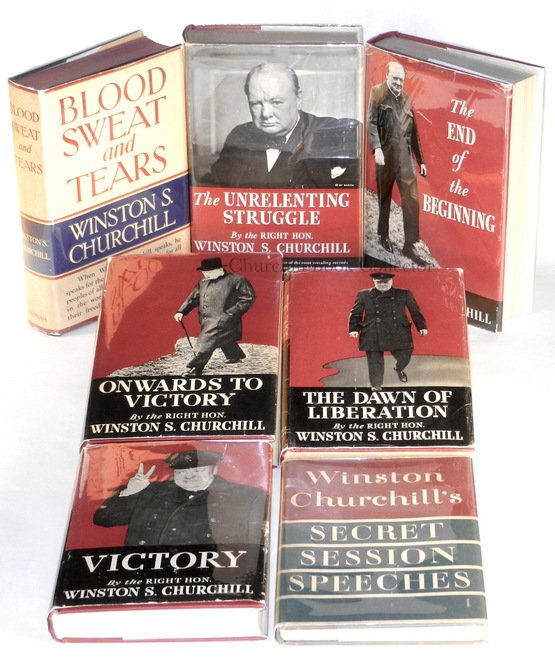 The dust jackets are, however, nearly identical, distinguished only by the front flap; the first edition has a $3.00 price on the upper front flap, while the BOMC edition has instead an oval BOMC logo on the lower front flap.

As with the British editions, there were eventually seven individual U.S. volumes of Churchill's war speeches published between 1941 and 1946.  However, unlike their British counterparts the U.S. editions vary considerably in publisher, size, and appearance.  While the first volume was published by G.P. Putnam's Sons, volumes 2-6 were published by Little, Brown and Company.  Each of these five volumes was bound in red cloth with a black and red dust jacket, but the volumes differ considerably in height with volumes 4-6 smaller, a result of wartime material rationing as explained on the Volume 5 dust jacket flap.  The final volume was published by Simon and Schuster in an entirely different size, binding, and dust jacket style.

Canadian editions of all seven war speech volumes were published by McClelland and Stewart, with the dust jackets of only this first volume and the final volume (Secret Session Speeches) differing appreciably from their U.S. counterparts.  The Canadian first edition of Into Battle merits further discussion, as it features two distinctly different editions and several variants.