"He commanded the armies of Europe against France for ten campaigns.
He fought four great battles and many important actions.
It is the common boast of his champions that he never fought a battle that he did not win, nor besieged a fortress he did not take. Amid all the chances and baffling accidents of war
he produced victory with almost mechanical certainty.
Even when fighting in fetters and hobbles, swayed and oppressed by influences
which were wholly outside the military situation,
he was able to produce the same result, varying only in degree.
Nothing like this can be seen in military annals.
His smaller campaigns were equally crowned by fortune.
He never rode off any field except as a victor."

(Marlborough: His Life and Times, Volume I, p.3) 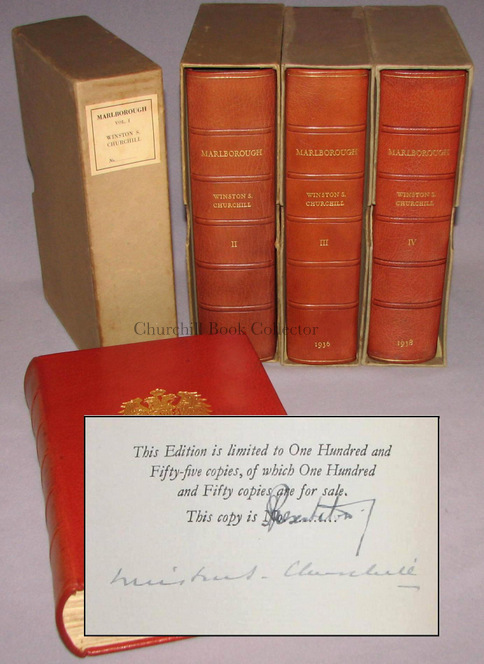 Churchill's monumental biography of his great ancestor, John Churchill, the first Duke of Marlborough, was initially conceived a full 40 years before publication of the fourth and final volume.  Churchill originally considered the idea of the biography in 1898, returning to it in earnest in 1928.

Marlborough ultimately took 10 years of research and writing and is the most substantial published work of Churchill's "wilderness years" in the 1930s.  The final volume was published on the eve of the Second World War in 1938.  Richard Langworth says, "To understand the Churchill of the Second World War, the majestic blending of his commanding English with historical precedent, one has to read Marlborough."

The British first edition was issued in four volumes between 1933 and 1938.  Here the story gets interesting.

Churchill's Marlborough is the *only* signed and numbered limited issue of a first edition by Churchill.  George G. Harrap & Co., Ltd. produced 155 signed sets sumptuously bound in orange morocco by Leighton Straker Ltd.  The bindings feature raised spine bands, gilt decoration, marbled endpapers, and are signed by Churchill on the Volume I page designating the limited edition.  Even the contents are extravagant, produced on thicker paper than the normal British trade editions, with untrimmed fore edges and gilt top edges.  Each book came in a gray cardboard slipcase with paper labels, the first of which bears the number of the set.

Of the limited issue, 150 of the 155 sets were numbered and sold by advance subscription.  Just 5 of the 155 sets were not numbered and not for sale - reserved as special gifts from either the author or publisher.  Ronald Cohen and Richard Langworth both cite the word "special" appearing in the number space of these five unnumbered sets and the absence of any set number on the spine label of the Volume I slipcase.  (See Langworth, p.169 and Cohen Volume I, p.399, footnote 714).  Only one of the five unnumbered sets is known with the word "Presentation" written in the number space.  This set, which we were privileged to offer, is pictured here. 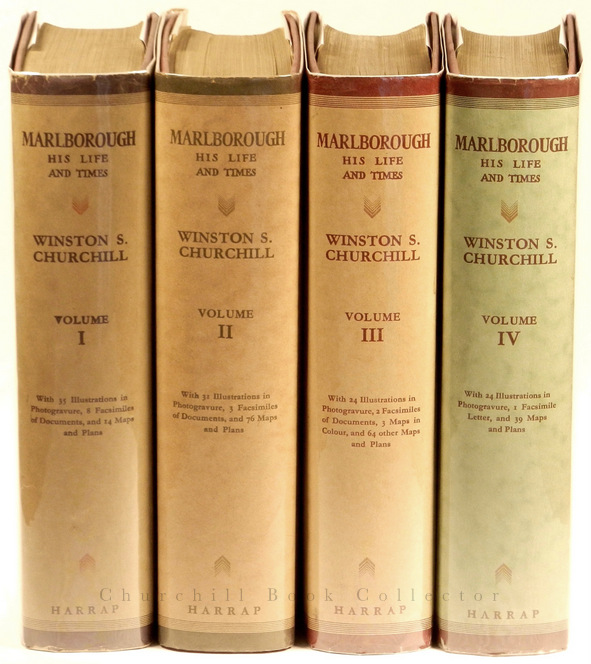 As might be supposed, signed limited issue sets command an imposing price.  The good news for collectors is that the general trade issue of the first edition (volume I published 6 October 1933) is also a physically impressive production.  The books measure 9.25 x 6.25 inches and are roughly 2 inches thick.  Each is bound in plum cloth with beveled edges, the Marlborough coat of arms gilt on the front cover, and a gilt top edge.  Moreover, each volume is profusely illustrated.  The dust jackets were issued in an attractive, uniform style, with the color varying from a light gray to tan to light green, though all bearing the same dark red print and decorative rules.

Unfortunately, the plum cloth binding of Volumes I-III proved highly susceptible to sun fading.  (A different, more fade-resistant dye was used in Volume IV.)  Without the dust jackets, Volumes I-III are nearly always spine faded and collector-worthy jacketed first editions are now scarce.  Particularly scarce are first printing dust jackets for Volumes I & II.  We caution collectors to be wary of price-clipped dust jackets, as later impression Volume I & II dust jackets state either "2nd Impression" or "3rd Impression" printed next to the price on the lower front flap.  No such problem applies to Volumes III & IV, which each had only a single printing.

The U.S. first edition (Volume I published 3 November 1933) has its own interesting and non-conventional story.  Although there was no signed, limited issue of the U.S. first edition, there were entirely different states of the dust jacket, not to mention several slipcases associated with different volumes and states. 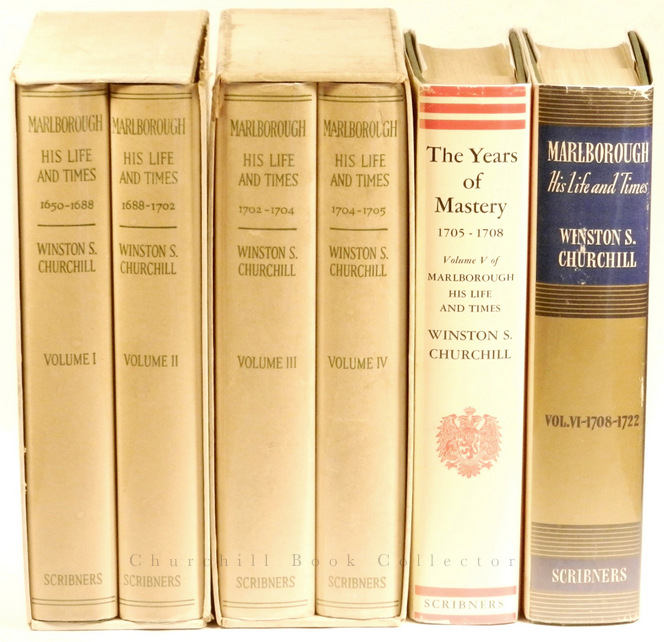 While the British first edition was issued in four volumes, the U.S. publisher chose to split the first two volumes into two books each, resulting in a six volume set.  The setting, illustrations, and maps are otherwise identical to the British four-volume work.

The U.S. first editions were bound in a striking emerald green cloth, with gilt spine lettering.  As first issued, this set had plain white dust jackets with green printing on the spines for Volumes  I-IV, which were supplied in decorated slipcases each holding two volumes.  Volume V came in a distinctive dust jacket printed red and black on white paper with a portrait of Marlborough (in the same style as the front covers of the two slipcases).  Volume VI was issued last in a blue and gold jacket.

Subsequently, all six volumes were released in the blue and gold dust jackets and sold as a uniform set.  As a final publisher option, upon publication of the sixth and final volume in 1938, the publisher sold the full, uniformly blue and gold jacketed set boxed in a dark green publisher's slipcase for $16.50. 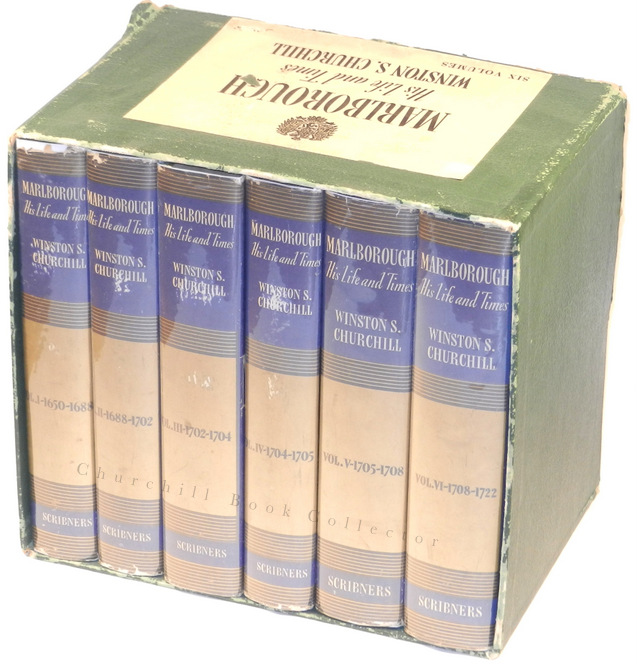 There was also a Canadian first edition of Marlborough, which makes an interesting story.  The Canadian editions of the first three volumes were issued by Ryerson Press instead of Harrap, bound in a dark purple cloth instead of the plum of the British edition and without the beveled edges of the British edition.  Canadian editions also feature dark purple top edge stain instead of the gilt of the British first editions.  The dust jackets appear nearly identical, differing only in "Ryerson Press" in lieu of "Harrap" printed on the lower spine and omission of front flap pricing.

By contrast, the fourth and final "Canadian" volume was issued by Harrap, since by 1938 arrangements between Harrap and Ryerson had ended.  Consequently, Harrap issued the fourth volume as British edition sheets in a British edition dust jacket, but with the volume beneath bound to match the previous Ryerson volumes in a distinctly different dark purple smooth cloth without the beveled edges of the British edition.

Further confusing matters for collectors, we have occasionally noted copies of Volume I of the British first edition incongruously bound in the dark purple, unbeveled cloth of the Canadian editions, but clearly British first edition as they bear the Harrap imprint on both binding and dust jacket spines, a gilt top edge, and a British price on the dust jacket front flap.