By Winston S. Churchill
First published in 1945 by Cassell and Company Ltd., London

"...during the night and the early hours of this morning
the first of the series of landings in force upon the European Continent has taken place... This vast operation is undoubtedly the most complicated and difficult
that has ever taken place... The ardour and spirit of the troops, as I saw myself,
embarking in these last few days was splendid to witness."

(Statement to the House of Commons on the Invasion of France, 6 June 1944) 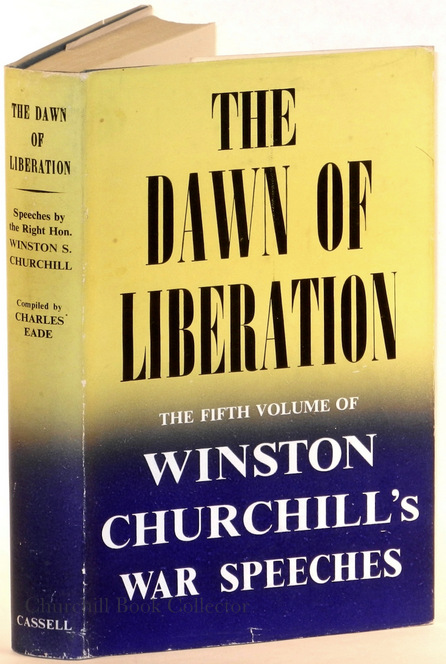 The Dawn of Liberation is the fifth volume of Churchill's war speeches.  This volume publishes his speeches, broadcasts, messages, statements, and letters made, sent, and issued between 22 February and 31 December 1944.

A full and momentous year, 1944 of course included the Normandy invasion, the largest amphibious operation in history, which re-established the Allied military presence in German-occupied Europe.

While much fighting was yet to come and the war was not yet over, as 1944 drew to a close the suspended tensions of domestic politics as well as the complex jockeying for postwar spoils among allies intruded ever more urgently on a unified war effort.

This unrest as victory gained imminence is intimated in the final pages of The Dawn of Liberation.  A 31 December 1944 message to the Primrose League stated, "To-day we are entering upon a year that should bring us victory in Europe... Until that end has been achieved there can be no return to our normal habits.  It would be tragic folly to prolong, by any slackening in the last phase, the agony that a megalomaniac ambition has loosed upon the world."

Churchill would be unable to hold the many political fractures and frustrations at bay for much longer, and would suffer an abrupt electoral upset before the war was officially won.  Indeed, the very day the British first edition of The Dawn of Liberation was published (26 July 1945) Churchill formally conceded the fall of his wartime government to Labor in the General Election of July 1945. 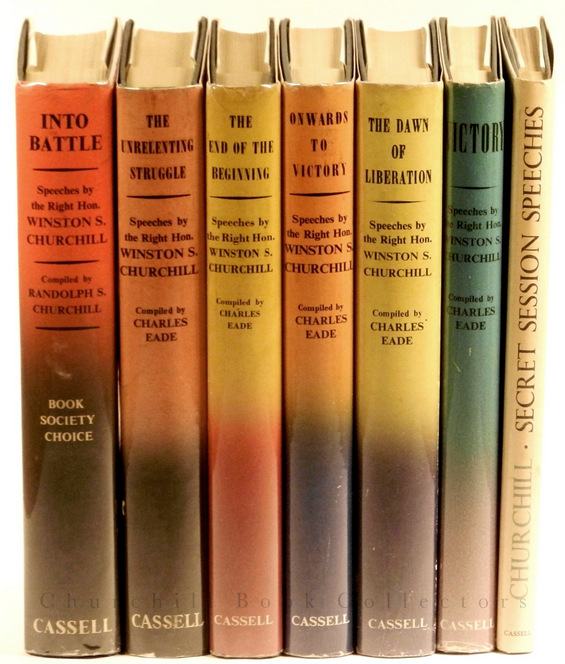 For this fifth volume, Charles Eade, Editor of the Sunday Dispatch, continued to compile Churchill's war speech volumes free of charge - a service he first volunteered in 1941 when Churchill's son and previous compiler, Randolph, was called into wartime service.

The first edition of The Dawn of Liberation is bound in coarse, blue cloth.  The dust jacket is colored bright yellow on the upper half transitioning into purple on the lower half, with print in white and black.  There were two printings of the British first edition, the second published in January 1947.  Collectors should note that the first printing dust jackets are unique, the second printing distinguished by changes to flap content. 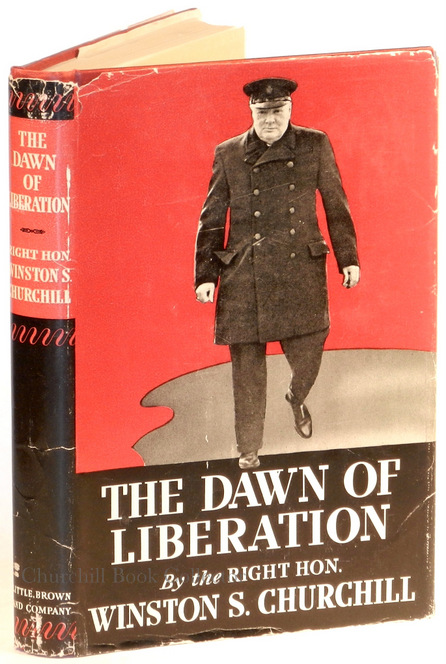 The U.S. first edition was published by Little, Brown and Company, who had wanted a different title, calling The Dawn of Liberation "slightly ponderous" (Cohen, Volume I, A214.1.a, p.674).  Churchill's preference prevailed, which is perhaps just as well; the year before Little, Brown and Company, proposed "The Year of the Climax" for the book ultimately published as Onwards to Victory " which Churchill considered "a very much more suitable title" (Cohen, Volume I, A194.1.a, p.647).

The U.S. first edition is bound in red cloth stamped in gilt with black title panels on the spine and front cover.  The illustrated dust jacket is printed red, black, and white with a full length photo of Churchill in a navy pea coat and naval cap, striding forward.  There were three printings of the U.S. first edition, all in August 1945. 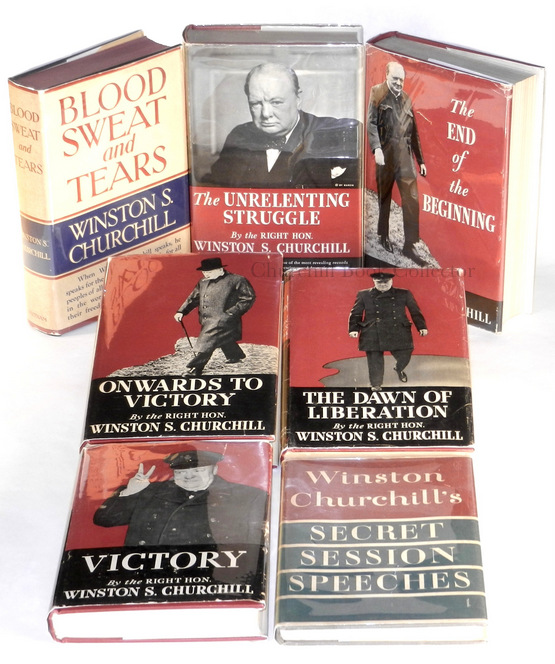 A Canadian edition was issued from U.S. plates, bound and jacketed as the U.S. edition with the Canadian publisher's name (McClelland and Stewart) substituted for that of the U.S. publisher.  All seven Canadian war speech volumes were published by McClelland and Stewart, with only the first and final volume dust jackets differing appreciably from their U.S. counterparts.