By Winston S. Churchill
First published between 1956 and 1958 by Cassell and Company Ltd., London

"I write about the things in our past that appear significant to me, and I do so
as one not without some experience of historical and violent events in our own time.
I use the term 'English-speaking peoples' because there is no other
that applies both to the inhabitants of the British Isles and to those independent nations
who derive their beginnings, their speech, and many of their institutions from England,
and who now preserve, nourish, and develop them in their own ways." 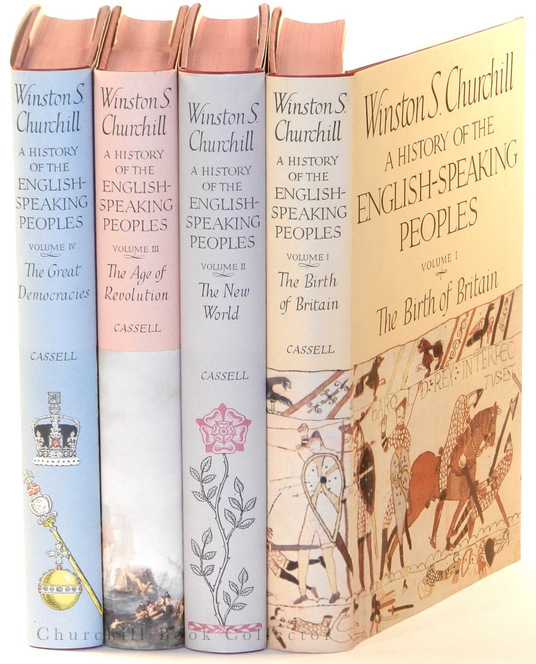 Churchill's four volume epic, A History of the English-Speaking Peoples, was published between 1956 and 1958.  The work traces a sweeping historical arc from Roman Britain through the end of the Nineteenth Century.  Volumes I & II deal primarily with Britain and her rise to become a world power, including early colonization of North America.  Volume III necessarily broadens in scope, covering 1668 to 1815, including the American Revolution and the defeat of Napoleon.  Volume IV covers 85 years of the Nineteenth Century, ending with the death of Queen Victoria.  Perhaps not conincidentally, this is the very year that saw Churchill conclude his first North American lecture tour, take his first seat in Parliament, and begin to make history himself.

The work itself was two decades in the making.  The Churchillian conceptions that underpinnned it were lifelong.

Churchill began A History of the English-Speaking Peoples in the 1930s, completing a draft of "about half a million words" which was set aside when Churchill returned to the Admiralty and to war in September 1939.  The work was fittingly interrupted by an unprecedented alliance among the English-speaking peoples during the Second World War - an alliance Churchill personally did much to cultivate, cement, and sustain.  The interruption continued as Churchill bent his literary efforts to his six-volume history, The Second World War, and then his remaining political energies to his second and final premiership from 1951-1955.

The cultural commonality and vitality of English-speaking peoples animated Churchill throughout his life, from his Victorian youth in an ascendant British Empire to his twilight in the midst of the American century.  Churchill, the child of an American mother and decended from British nobility on his father's side, paid particular heed to the 'special relationship' between Britain and the United States.  Perhaps to some extent he regarded himself as a personification of that relationship.  When Churchill first addressed the U.S. Congress on 26 December 1941 he famously quipped, "I cannot help reflecting that if my father had been American and my mother British, instead of the other way around, I might have got here on my own."

Among the English-speaking peoples, Churchill considered Britain and the Unitied states in particular "united by other ties besides those of State policy and public need."  During his wartime speech at Harvard, among the "ties of blood and history" Churchill cited were, "Law, language, literature - these are considerable factors.  Common conceptions of what is right and decent, a marked regard for fair play, especially to the weak and poor, a stern sentiment of impartial justice, and above all the love of personal freedom, or as Kipling put it: 'Leave to live by no man's leave underneath the law' - these are common conceptions on both sides of the ocean among the English-speaking peoples"  (6 September 1943 speech at Harvard University).

The reinforcement and constructive application of these common conceptions - upon which so much of 20th Century history hinged - would continue to the very end of Churchill's life and career.  Indeed, Churchill's aspirations and anxieties about this 'special relationship' are encapsulated in the title of his last published book of speeches in 1961, The Unwritten Alliance.

Uniquely in the Churchill canon, the British, U.S. and Canadian first editions of A History of the English-Speaking Peoples were published simultaneously.  Volume I was published on 23 April 1956.  The fourth and final volume was published on 17 March 1958.

Initial reviews reflected the hagiography surrounding the "living national memorial" Churchill had become.  Later critics were less kind, mostly centering on the charge that the work was not really history in the objective, academic sense.  Clement Atlee - who replaced Churchill as premier in 1945 and who Churchill would in turn defeat in 1951 - concisely jabbed with the comment that the work might have been titled "Things in History Which Interested Me."  Of course, Churchill himself says in his preface, "This book does not seek to rival the works of professional historians.  It aims rather to present a personal view on the processes whereby English-speaking peoples throughout the world have achieved their distinctive position and character."  Whatever the critics may say, the work was immensely popular and remains of interest to readers, judging by a robust number of successive reprints.

The British first edition is a particularly attractive production.  Each tall volume is bound in uniform smooth, deep red cloth with gilt stamped spines and red topstain.  The dust jackets are especially striking, uniform in style, but each featuring different background color and illustrations on the lower half of the faces and spines.  Volume I features The Bayeaux Tapestry, Volume II The Woburn Abbey portrait of Elizabeth I and an early world map, Volume III Stanfield's Battle of Trafalgar and Trumbull's Declaration of Independence, Volume IV Winterhalter's Queen Victoria and the Royal Family and Healy's The Peacemakers, featuring Lincoln and his military commanders.

Churchill took an active and detailed interest in the aesthetics of the publication.  He told his doctor, "it is not necessary to break the back of the book to keep it open.  I made them take away a quarter of an inch from the outer margins of the two pages and then add the half-inch so gained to the inner margin."  He was clearly satisfied with the result, remarking with pardonable exuberance, "It opens like an angel's wings" (Gilbert, Volume VIII, p.1184).

Unfortunately, as beautiful as the first editions are, they proved somewhat fragile.  The dust jackets commonly suffer significant fading, wear, soiling, and spotting, and the books beneath typically bear spotting, as well as fading of the red-stained top edges.

The simultaneous four-volume U.S. first edition is certainly less stately in appearance, though in our opinion perhaps excessively maligned as being an unattractive edition.

The U.S. first editions are bound in smooth, quarter black cloth over grey, coarser cloth boards with head and foot bands and red-stained top edges.  The spines are decorated with red panels, numerous gilt rules, and gilt print.  The front covers feature a gilt stamped facsimile of Churchill's signature.  The dust jackets are bound in a uniform style with a horizontal band of color across the front face and spine against a contrasting color, but each jacket features a different color scheme and front cover photograph portrait of Churchill on the lower front face. 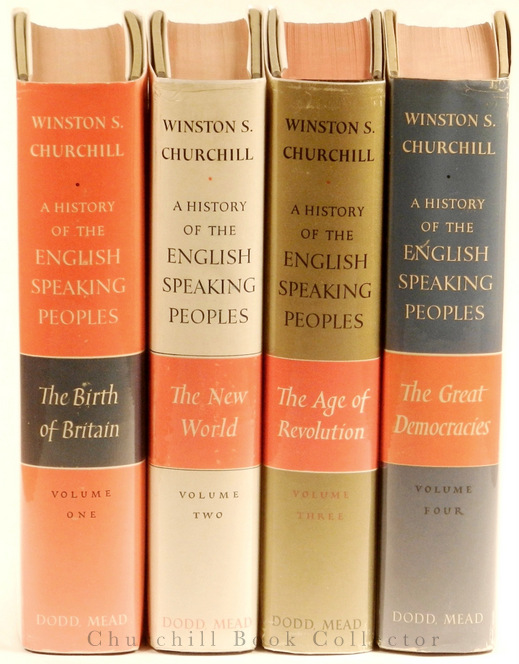 Two problems plague collectors seeking the U.S. first edition.  First is the usual collector's conundrum - that they are scarce in collectible condition.  The jacket spines - particularly Volume I - sunned easily and the binding spines seem inconsistent in quality and not particularly durable.  This inconsistency doubtless owes in part to the fact observed by Richard Langworth that "Some first editions were printed on much thinner paper to meet demand; invariably, these are found with very dark red, that is, maroon, spine panels instead of the normal bright red.  Easily spotted because of their thinner bulk, these are nevertheless true first editions" (Langworth, p.319).  In our experience collector-worthy U.S. first edition sets are considerably more scarce than their British counterparts, particularly sets with true red spine panels printed on thicker paper.

The second problem is the fact that the U.S. first edition is very similar in appearance to the concurrent Book-of-the-Month Club (BOMC) edition.  First printings of the first edition should generally be distinguished by $6.00 prices on the dust jacket flaps, the words "FIRST EDITION" on the copyright page, head and foot bands, and red-stained top edges.

Of particular note, a small number of U.S. first editions were produced bearing the words "PRESENTATION EDITION.  NOT FOR SALE" on the copyright page of each volume.  In all other respects such copies are identical to normal U.S. first editions, including the $6.00 price on the dust jacket flap.  We have encountered a very few such copies with a plain white business card laid in printed black in two lines, "With Compliments of / Dodd, Mead & Company, Inc."  Presentation copies of the U.S. first edition are rare; a full, four-volume set thus, doubly so.

Canadian first edition volumes were issued simultaneously with their British and U.S. counterparts, but from American first edition plates.  Appearance is quite similar, with the same spine design as the U.S. first edition over navy cloth boards.  The same head and foot bands are present, but the top edges are unstained.  The Canadian publisher's name - McClelland & Stewart - is substituted on the lower jacket and volume spine and on the title page.  However, collectors should note that there are no prices on the Canadian dust jacket flaps and no indication of first edition on the title page verso. 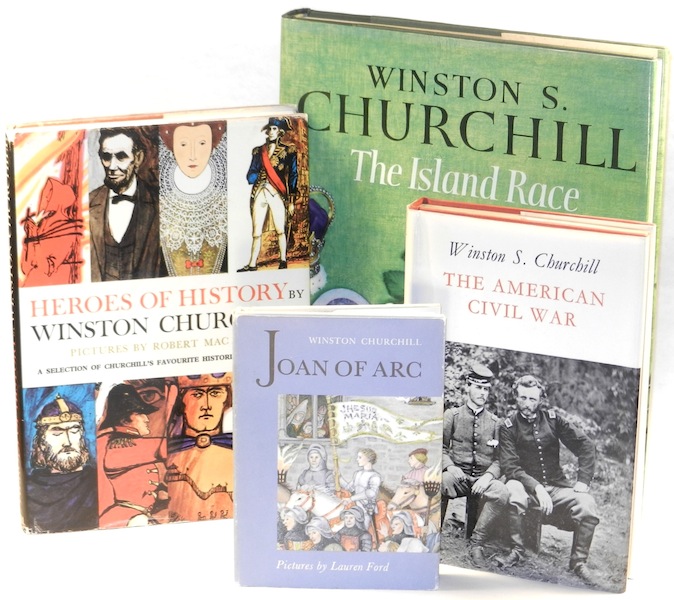 As with the U.S. first edition, there was also a Canadian Book-of-the-Month Club issue similar in style to the Canadian first edition, but bound instead in red cloth with blue spine panels and no head and foot bands.

As with the U.S. first edition, there was also a limited production of 350 publisher's presentation copies.  In the case of the Canadian editions, these are delineated by an extra leaf before the title page printed, "with the best wishes and compliments of the season from myself and my associates" and hand-signed by John McClelland.

This final of Churchill's great, multi-volume works spawned many single-volume spinoffs in the form of excerpted works that have become collectible in their own right. These include The American Civil War (1961), The Island Race (1964), Heroes of History (1968), and Joan of Arc (1969).