By Winston S. Churchill
First published in 1953 by Cassell and Company Ltd., London

"I, whose youth was passed in the august, unchallenged and tranquil glories
of the Victorian Era, may well feel a thrill in invoking,
once more, the prayer and the Anthem
GOD SAVE THE QUEEN"

(7 February 1952 Broadcast on the Death of King George VI) 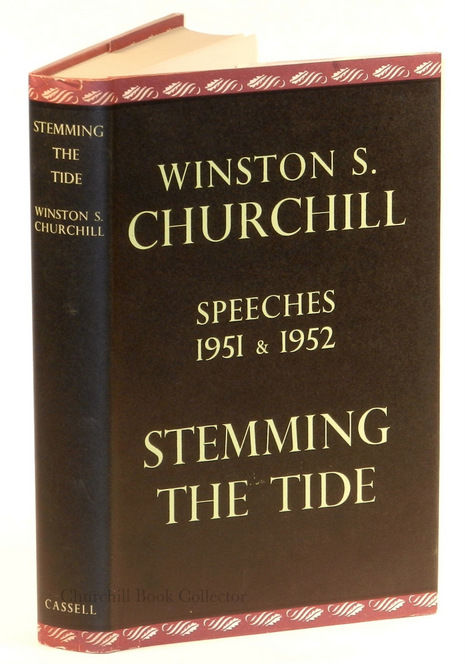 This is the fourth of Churchill's five postwar speech volumes and his last volume of speeches published while he was Prime Minister.  Stemming the Tide contains 52 speeches delivered by Churchill from 7 February 1951 to 11 December 1952.  These speeches span the end of Churchill's period as Leader of the Opposition and the beginning of his second and final term as Prime Minister.  In the British General Election of October 1951 the Conservatives won 321 seats to Labour’s 295, returning Churchill to Downing Street at the age of 77.  He would remain Prime Minister until April 1955.

The period encompassed by these speeches saw President Eisenhower elected and the accession of Queen Elizabeth II.  As a measure of his longevity, the last time Churchill had occasion to exclaim "God save the Queen" on British soil was in 1900, the year he was first elected to Parliament during the reign of Queen Victoria.

Few dispute that Churchill's second premiership was one of diminished vitality.  Age, exhaustion, and ill health (including successive strokes) sapped him.  Though many policy priorities went by the wayside, Churchill doggedly, even if often unsuccessfully, pursued peace.  Moreover, Churchill's oratory in these pages retains a full measure of Churchillian vigor, wit, cunning, and inspiration, leavened by reflective recognition of the extraordinary length and scope of his public career.

In his 9 November 1951 speech at the Lord Mayor's banquet, Churchill quipped,
"Though I have very often in the last forty years or so been present at your famous guildhall banquets to salute the new Lord Mayor, this is the first occasion when I have addressed this assembly here as Prime Minister... When I should have come here as Prime Minister the Guildhall was blown up and before it was repaired I was blown out!  I thought at the time they were both disasters.  But now we are all here together in a union which I hope will bring good luck."

If anything, it was Churchill's oratory that sustained him.  After his June 1953 stroke, which was concealed from most of Parliament and the public, Churchill considered resigning.   It was his 30 September speech at a Conservative Party conference and his 3 November speech to Parliament that "gave him confidence that he need not step down."  Both speeches were successful.  His particularly well-received speech to Parliament prompted him to tell his doctor "That's the last bloody hurdle."  Re-engaging without further hesitation, Churchill further remarked "Now, Charles, we can think of Moscow" (Gilbert, Churchill: A Life, p.919). 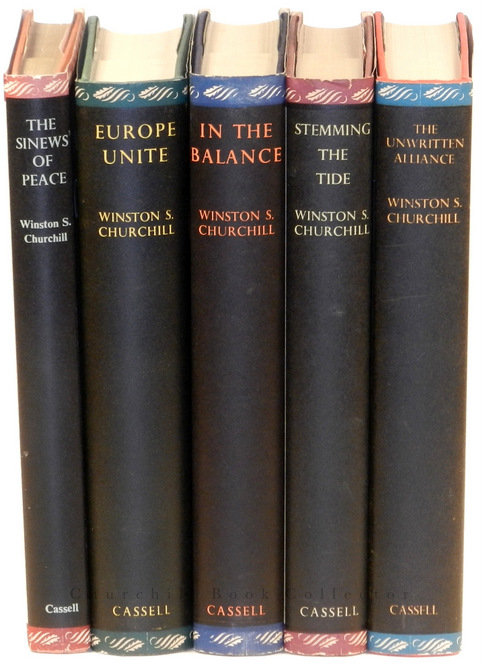 The times in which Churchill made these speeches were no less formidable than the skills and experience he brought to bear.  Churchill's five post-WWII speech volumes span the period from Demobilization in late 1945, when Churchill was Leader of the Opposition, through his second Premiership, into a time when Churchill passes "into a living national memorial" of the time he has lived and the Nation, Empire, and free world he has served. The events encompassed by these years are in many ways no less dramatic than those of the war years - the unraveling of the British Empire, the post-war recovery, the onset of the Cold War, Soviet acquisition of the atomic bomb, development of the hydrogen bomb, both Cold and proxy war between the Western and communist powers, and the beginning of the space age. 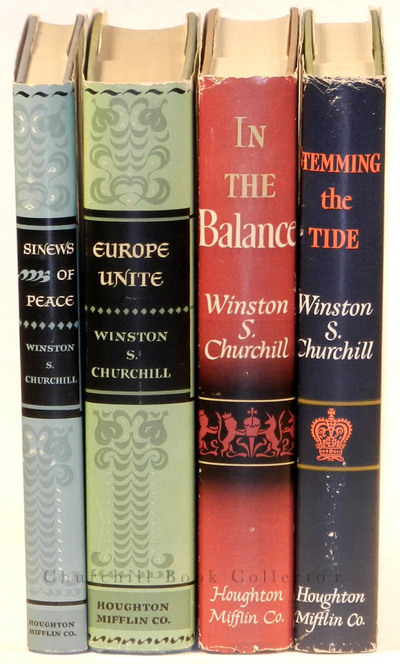 Amusingly, a number of titles were proposed for this fourth postwar speeches volume.  Randolph informed his father that the publisher's suggestions "included 'Stemming the Tide', 'Fight for Survival', 'Against the Stream', and 'Shouldering the Burden'."  Randolph suggested 'Uphill All The Way'.  Churchill replied that "'Uphill all the way' is a cry of pain" and settled for 'Stemming the Tide' (Gilbert, volume VIII, p.784).

These postwar speech volumes are much scarcer than Churchill’s War Speeches volumes; each of these five books had only a single printing.  The five British first editions of the postwar speeches are uniform in height and were issued in striking black dust jackets with a border along the top and bottom of the jacket featuring a repeating white oak leaf design.  The background color for the oak leaf border and the spine and front cover print color vary with each volume.  The dust jacket rear faces and flaps are white, printed black.  The bindings are bound in a simple, uniform style, but vary in cloth color.

The British first edition of Stemming the Tide is bound in dark red cloth stamped gilt on the spine.  The dust jacket features a complementary dark red background for the oak leaf border and is printed in light green.  Publication was 25 June 1953, with a single printing of 5,500 copies. 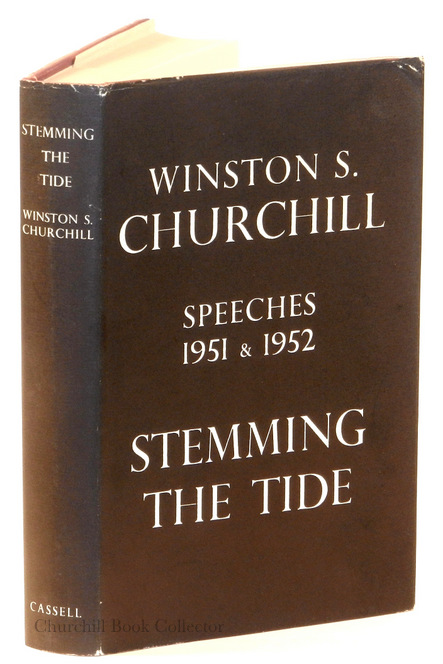 However, collectors should note that the publisher, Cassell, did not bind all 5,500 sheets in 1953. In 1961 a remainder binding was issued in a smoother cloth and in a solid black dust jacket lacking the oak leaf border and with changes to the front and rear jacket flaps.

The U.S. first edition was the last of Churchill's speech volume published in America.  Since the fifth and final postwar speeches volume, The Unwritten Alliance, had no U.S. edition, a full set of U.S. postwar speeches ends with Stemming the Tide and comprises only four volumes. 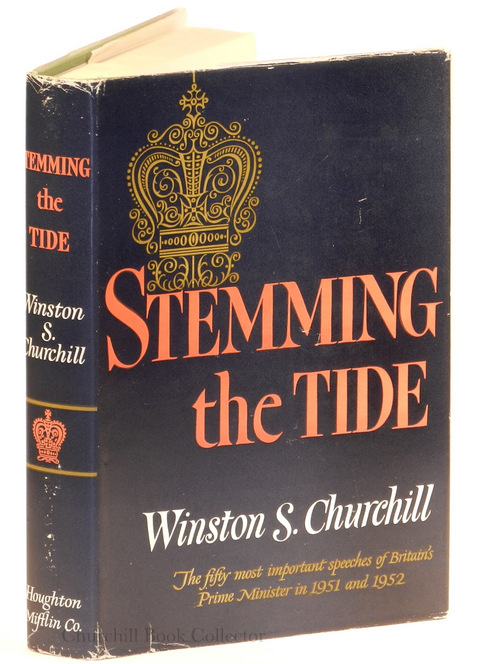 The U.S. first edition of Stemming the Tide was issued using British sheets, but is considerably different, bound in medium green cloth with dark green spine decoration and black spine print.  The dust jacket is printed black, red, and gold on white paper, with a black background on the spine and front face.

The U.S. editions of Churchill's postwar speeches were produced in far fewer numbers than the British editions, and this final volume is no exception with just a single printing of 1,850 copies published in January 1954.

Like their British counterparts, the four U.S. first editions are uniform in height with varying binding colors.  Unlike their British counterparts, there is not a consistent binding design, with decorative elements to the binding spines of the final three volumes not present on the first volume, The Sinews of Peace.  The U.S. edition dust jackets also vary considerably.  The first two volumes - The Sinews of Peace and Europe Unite - have the same dust jacket design, differentiated only by background color.  The final two U.S. dust jackets - those for In the Balance and Stemming the Tide - each have a unique design.