"There were, in fact, at this juncture, two great plans of using sea power
to relieve the murderous deadlock in the West. Both aimed at breaking into and dominating
the land-locked waters which guarded the Teutonic flanks. Both would give direct contact
with Russia and would rescue our Eastern Ally from her deadly isolation. Both would affect
in a decisive manner a group of neutral States. Both in proportion, as they succeeded,
would open up enormous new drains on the resources of the Teutonic Empires.
Should we look to Holland, Denmark, Norway, and Sweden,
or to Greece, Bulgaria, and Roumania?
Should we strike through the Belts at the Baltic,
or through the Dardanelles at Constantinople and the Black Sea?" 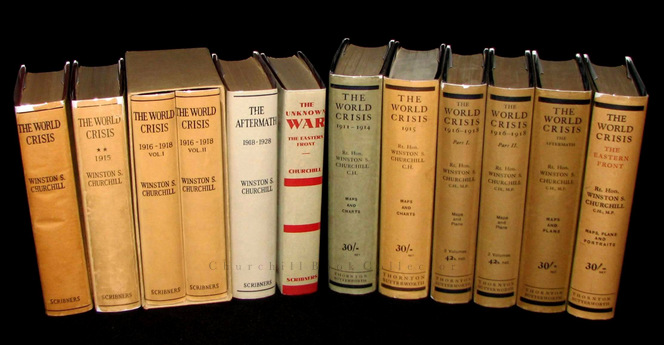 The World Crisis is Churchill's history of the First World War, originally published in six books between 1923 and 1931.

The first four books comprise the history of the war years 1911-1918 and were published between 1923 and 1927.  Two supplemental volumes followed in 1929 and 1931. These were The Aftermath, covering the years 1918-1928, and The Eastern Front, which Churchill initially proposed as "separate from but supplementary to our five volume history", intended to describe in greater detail "the course of events in the Eastern theatre" (Cohen, Vol. I, p.234).

Of The World Crisis, Frederick Woods wrote, "The volumes contain some of Churchill's finest writing, weaving the many threads together with majestic ease, describing the massive battles in terms which fitly combine relish of the literary challenge with an awareness of the sombre tragedy of the events." Churchill was in a special position to write this history, having served both in the Cabinet and on the Front.

Churchill was First Lord of the Admiralty from 1911 until 1915, but after the failure in the Dardanelles and the slaughter at Gallipoli, he was scapegoated by his peers, betrayed by his Prime Minister, and hounded by the Conservatives.  Churchill would go from the Cabinet to the Front, serving as a lieutenant colonel leading a battalion in the trenches.

By the war's end, Churchill was exonerated by the Dardanelles Commission and rejoined the Government, but the stigma of the Dardanelles would linger. Churchill wrote his history of the First World War in part to clear his name and reputation, but the six volume masterwork he produced far exceeds this purpose. 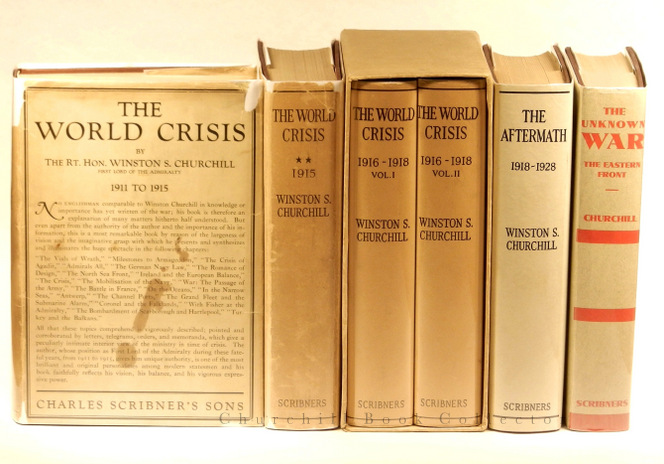 For the U.S. edition, all six bindings are a uniform, russet-colored cloth.  However, the dust jacket for the final volume differs considerably in style, and the middle two volumes were originally issued together by the publisher in a slipcase.

There were multiple printings of each volume of the U.S. first edition, with varying differences to dust jackets, bindings, and contents.

The British first edition was more uniform in appearance, with identical dark blue cloth bindings and a consistent dust jacket style, varying only in dust jacket paper color and in red subtitle print on the sixth and final volume. 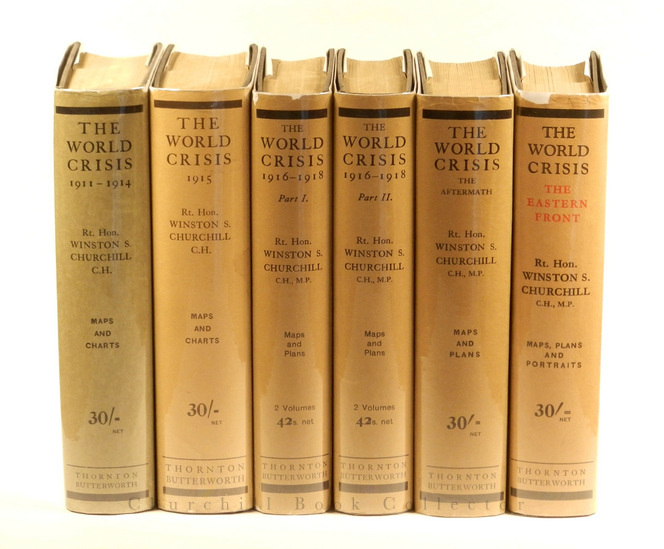 Many consider the British edition aesthetically superior to the U.S., with its larger volumes and shoulder notes summarizing the subject of each page.  There were multiple printings of each volume of the British first edition, with various small differences to bindings, content, and dust jackets.

Some anomalous versions of the British first edition merit mention.

First are so-called "traveller's" copies of the British first edition 1916-1918 volumes.  These particularly merit mention since it appears that they preceded the first edition, first printing.  Per Churchill Bibliographer Ronald Cohen (in comments intended for but unpublished in his bibliography), "There exists an early, and extremely rare, issue of the volume without the Index, described by the publisher on a tipped-on typed label on the title pages."  We have encountered only one jacketed set of this curious issue, the volumes of course being quite rare but the jackets potentially singular. 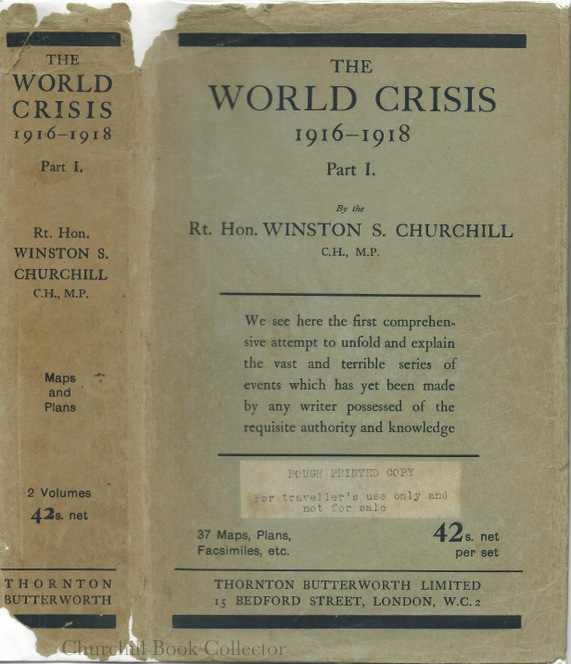 Contents and pagination of the volumes are identical to the first edition, first printings (including all maps, charts, etc.) with two exceptions: omission of the seven-page index at the end of Part II and lack of the errata at the Part II half-title.  These two omissions indicate that issuance of these "traveller's" copies preceded the normal British first printing.  The print itself is slightly lighter, but otherwise identical and the volumes themselves bulk slightly thicker.  The blue cloth bindings differ only in being a slightly brighter shade of dark blue than the dark navy of the normal British first trade printings.

The dust jackets are identical in content and size to those of the normal first printing.  However, of special note, the jackets are printed on the same thick, light greenish paper as the first printing of the 1911-1914 volume, rather than the notoriously acidic and brittle yellowish grey paper of the normal British first trade printings.  This both corroborates the assumption that issuance of "traveller's" copies preceded the normal first editions and makes these jackets unique variants.  The dust jackets each bear a 3.25 inch wide by .75 inch tall typed label affixed to the front face reading: "ROUGH PRINTED COPY / For traveller's use only and / not for sale".  Identical labels are affixed to each title page.

British first edition sheets of the six volumes of The World Crisis are also known bound by the Times Book Club.  We have encountered half a dozen such volumes, each bound similarly to first editions, but with slight variations, typically in the form of slightly lesser cloth and cruder gilt spine print.

Rounding out English-language first editions were both Canadian and Australian editions.

Only the first two volumes of The World Crisis - 1911 to 1914 and 1915 - had separate Australian issues. For the balance of the six-book set Australian customers were offered Thornton Butterworth issues.  The dust jackets are nearly identical to those of the British Thornton Butterworth first editions, with the exception that they say "Australasian Publishing Co" at the base of the jacket spines.  The volumes are bound in the same blue cloth as the British first edition with the same gilt and blind stamping, lacking only the publisher's name at the base of the spine. 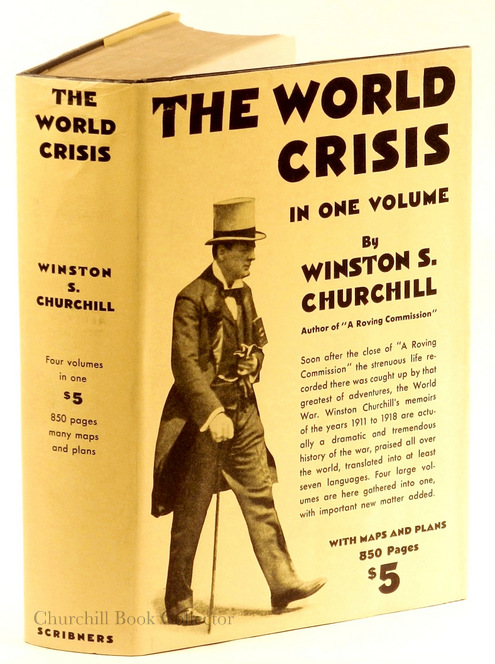 In 1931 - the same year the sixth and final book was published - the British, U.S., and Canadian publishers also issued a single-volume "Abridged & Revised Edition."  From both a bibliographic and collector's standpoint, this is a notable first edition of The World Crisis in its own right.

Churchill made significant revisions and added a new introduction and an entire new chapter on the Battle of the Marne.  As with the six volume first edition, the U.S. edition preceded the British, making it the true first edition.  Bound in navy cloth with gilt stamped spine, this U.S. first edition features one of the most striking and rare dust jackets in the Churchill canon.

The front face of the pale yellow dust jacket features a full-length, half-tone photograph of Churchill striding, in top hat and tails with walking stick in hand. The rear cover features a smaller head and shoulders image of Churchill "in the uniform of the South African Light Horse" (set amid an advertisement for A Roving Commission).

There were two subsequent printings of this edition, in 1942 and 1949.   The 1942 second printing was bound in either bright blue or red cloth.  Jacketed copies of the 430 copies of the second printing are extravagantly rare.  The only copy we have seen bears a jacket identical to that of the 1931 first printing and it seems quite reasonable that the publisher would not have produced a new dust jacket for this wartime issue.  The third printing dust jacket is entirely different, with a black spine and front face and prominently featuring the famous wartime photo of Churchill by Karsh. 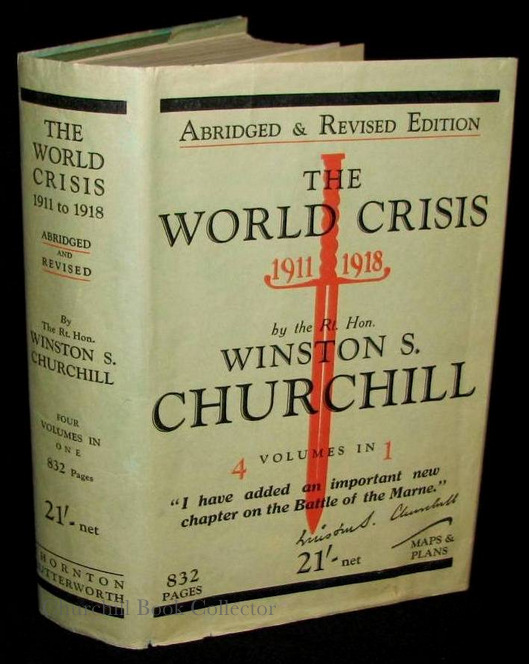 There was also a Times Book Club issue of the first printing of the British abridged and revised edition, bound in dark blue cloth with cruder gilt spine print.  We have only seen a single copy thus, but it compensated for its poor aesthetics by being inscribed by Churchill at Scapa Flow while at the Admiralty during WWII.

As with the six-volume first edition, a Canadian abridged and revised edition was issued using American sheets.