By Winston S. Churchill
First published in 1948 by Cassell and Company Ltd., London

"From Stettin in the Baltic to Trieste in the Adriatic,
an iron curtain has descended across the Continent....
I repulse the idea that a new war is inevitable;
still more that it is imminent...
If we adhere faithfully to the Charter of the United Nations
and walk forward in sedate and sober strength seeking no one's land or treasure,
seeking to lay no arbitrary control upon the thoughts of men...
the high-roads of the future will be clear, not only for us but for all,
not only for our time, but for a century to come."

This is the first of Churchill's five postwar speech volumes.  The Sinews of Peace contains 29 speeches spanning October 1945 through the end of 1946. These include the famous "Iron Curtain" speech given at Westminster College in Fulton, Missouri on 5 March 1946, where Churchill coined the phrase that described the division between the Soviet Union's sphere of influence and the West.  This speech incisively framed the Cold War that would dominate the second half of the Twentieth Century.  Then-President Harry S. Truman traveled to Fulton in order to personally introduce Churchill.

Of equal note is Churchill's famous speech of 19 September 1946 at Zurich University promoting a United Europe.  It was this speech that lent bold impetus to formation of what would eventually become the European Union, with Churchill an early, ardent, and vital advocate of pan-European integration.

Even though they come at the waning of Churchill's remarkable career and life, the five postwar speeches volumes remain worthy of both readers and collectors, marrying a singularly experienced voice to exceptional times.

Churchill's son, Randolph, had served as compiler for Churchill's final pre-WWII and first WWII speech volumes, Arms and the Covenant and Into Battle.  During Randolph's wartime service, the balance of Churchill's other six war speech volumes were compiled by Charles Eade, Editor of the Sunday Dispatch.  By 1948 Randolph was able to resume his previous responsibility, serving as Editor for all five of Churchill's postwar speeches volumes.

These postwar speeches volumes are much scarcer than Churchill’s War Speeches volumes; each of these five books had only a single printing.  The final volume, The Unwritten Alliance, is the last book of Churchill's speeches published in his lifetime, and was issued only in Britain with no U.S. edition.

The British first edition of The Sinews of Peace is bound in orange cloth stamped gilt on the spine.  The dust jacket features a dark red background for the oak leaf border and is printed in light blue-green and black. 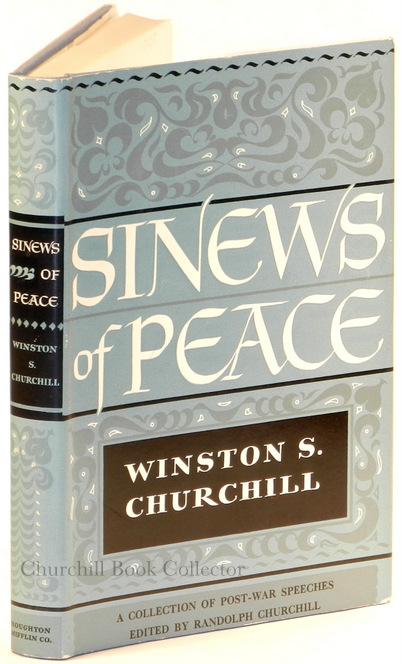 Collectors may wish to note that the edition has a pagination error in the transition from roman numerals in the prelims to Arabic in the main text.  Publication was 19 August 1948, with a single printing of 10,000 copies. 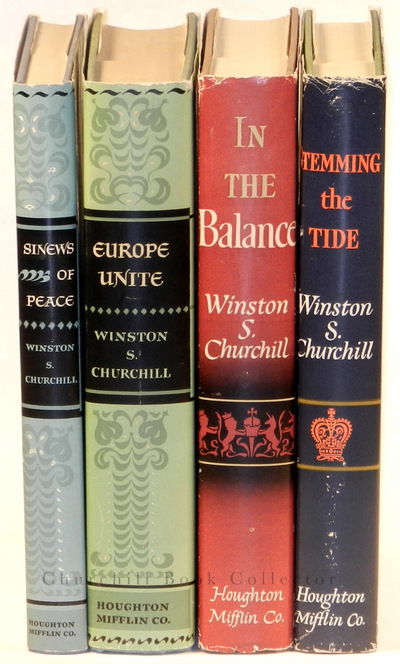