By Winston S. Churchill
First published in 1950 by Cassell and Company Ltd., London

"We shall only save ourselves from the perils which draw near
by forgetting the hatreds of the past, by letting national rancours and revenges die,
by progressively effacing frontiers and barriers which aggravate and congeal our divisions,
and by rejoicing together in that glorious treasure
of literature, of romance, of ethics, of thought and toleration...
which is the true inheritance of Europe." 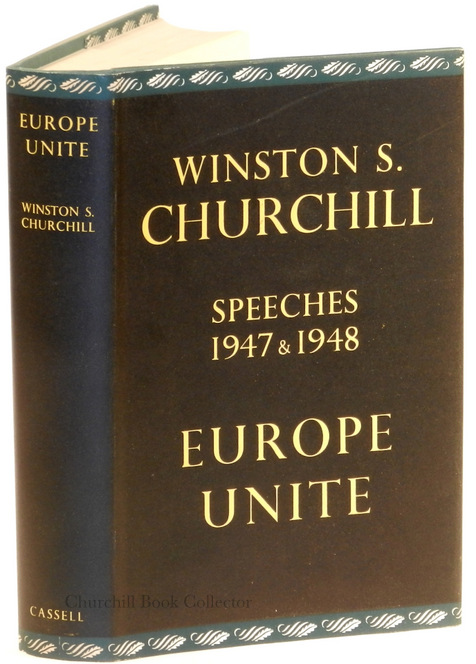 This is the second of Churchill's five postwar speech volumes.  Europe Unite includes 52 speeches spanning January 1947 to December 1948.  The book certainly reflects Churchill's position as Leader of the Opposition, and many of the speeches contain both domestic and foreign policy indictments of Clement Atlee's Labour Government, which had replaced Churchill in 1945.  Nonetheless, the title is rooted in Churchill's 7 May 1948 speech to the Congress of Europe.

Churchill was an early, ardent, and vital advocate of pan-European integration.  This and earlier speeches lent impetus to what would eventually become the European Union.  As ardent an advocate as Churchill was of Britain, and though his rhetoric and sentiments could ascend inspiring heights, Churchill had been a soldier, a war leader, a politician and statesman and as such, could not fail to be a realist.  Postwar Britain was diminished economically, militarily, and territorially.  As Randolph Churchill said in his introduction to the book, Britain's "place in the world can only be regained" in part by "assumption by Britain of a leading role in promoting the unity of Europe."

Nonetheless, Churchill was always able to interweave the compelling rhetorical glow of shining purpose with the duller impetus of practical necessity.  He opened his speech to the Congress of Europe by pronouncing that "Since I spoke on this subject at Zurich in 1946... events have carried our affairs beyond our expectations.  The cause was obviously either vital or merely academic.  If it was academic, it would wither by the wayside; but if it was the vital need of Europe and the world in this dark hour, then the spark would start a fire which would glow brighter and stronger in the heads and the minds of men and women in many lands.  This is what has actually happened."

The movement toward European integration would continue to prevail.  So would Churchill.  During the election of February 1950 - the month this book was published - Churchill polled more than 37,000 votes, double that of his challenger. Labour's majority was reduced to six, and when Atlee called another election in 1951 the Conservatives won 321 seats to Labour’s 295, returning Churchill to Downing Street. 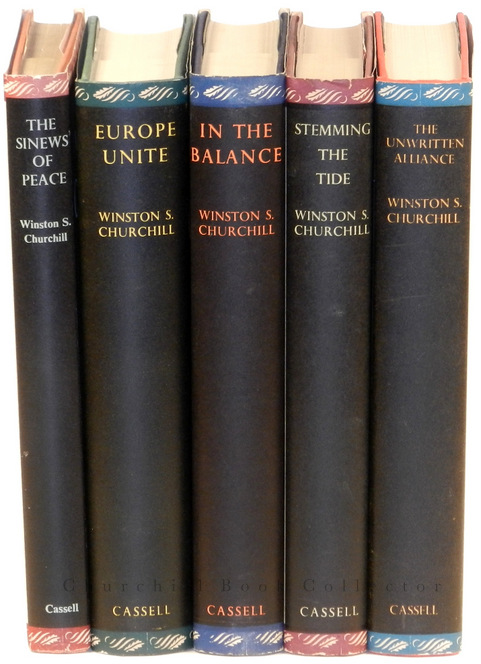 These postwar speech volumes are much scarcer than Churchill’s War Speeches volumes; each of these five books had only a single printing.  The final volume, The Unwritten Alliance, is the last book of Churchill's speeches published in his lifetime, and was issued only in Britain with no U.S. edition. 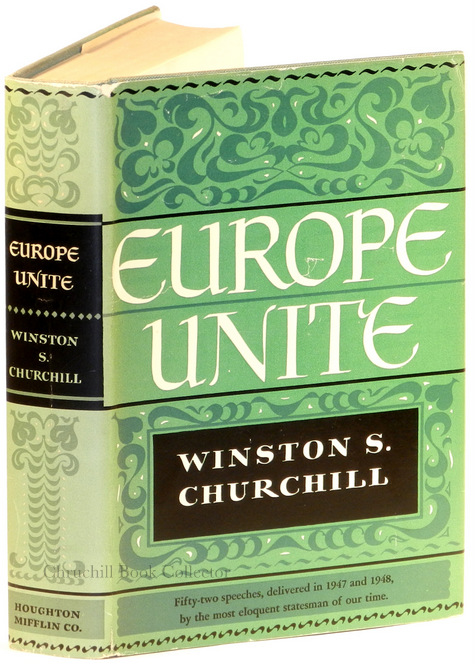 The British first edition of Europe Unite is bound in green cloth stamped gilt on the spine.  The dust jacket features a complementary green background for the oak leaf border and is printed in yellow and black.  Publication was 3 February 1950, with a single printing of 12,000 copies.  Churchill Bibliographer Ronald Cohen notes that the text is "replete with errors of spelling, line repetition and reversal, and punctuation" but that all except five of the original errors were corrected in the re-setting of type for the Collected Works of Sir Winston Churchill published in 1974.

The U.S. first edition was issued using British sheets, but is considerably different, bound in a blue-green cloth with dark green and black spine decoration and print.  The dust jacket is printed black, green, and gray on white paper, with a green background on the spine and front face.  A major weakness of this attractive U.S. edition is the exceptional vulnerability of the blue-green binding and green dust jacket to fading. Consequently, copies are most often found in flawed condition. 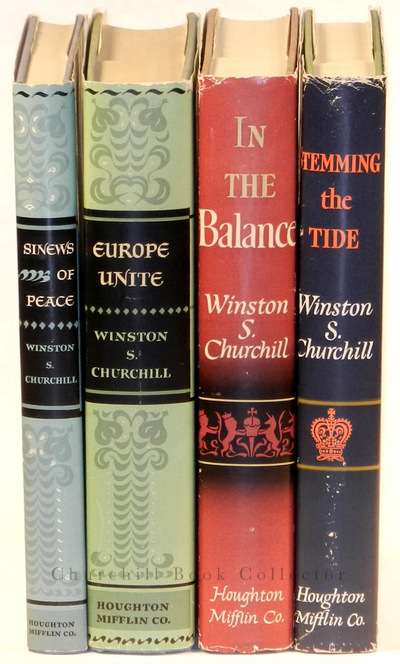