By Winston S. Churchill
First published in 1944 by Cassell and Company Ltd., London

"We must not lose for a moment the sense and consciousness of urgency and crisis
which must continue to drive us, even though we are in the fifth year of war.
We must go forward with unrelenting and unwearying efforts
through every living minute that is granted to us...
We cannot to-day exclude from our minds...
the conviction that victory will certainly be won...
But that does not mean that our war task is done." 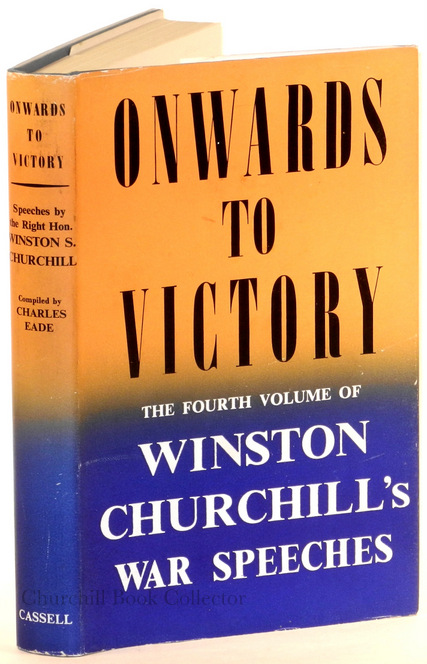 Onwards to Victory is the fourth volume of Churchill's war speeches, containing speeches throughout 1943.  Here the oratory takes a more positive tone as Churchill and the Allies begin to anticipate victory.

A little before mid-year, on 19 May 1943 Churchill gave his second address to the U.S. Congress.  Seventeen long months of war had passed since his first, just after Pearl Harbor.  Churchill's address came only days after the Allies' total victory in Tunisia.  Churchill's task was to continue to reinforce common cause, unified strategy, and mutual resolve.  "I do not intend to be responsible for any suggestion that the war is won or will soon be over." Churchill cautioned, invoking, for his American audience, the grim memory of the prolonged outcome of the U.S. Civil War, "No one after Gettysburg doubted which way the dread balance of war would incline.  Yet far more blood was shed after the Union victory at Gettysburg than in all the fighting which went before."  Churchill concluded, "By singleness of purpose, by steadfastness of conduct, by tenacity and endurance, such as we have so far displayed, by these, and only by these, can we discharge our duty to the future of the world and to the destiny of man."

Late November would see Churchill celebrate his 69th birthday at the Teheran conference with Roosevelt and Stalin.  Their joint statement of 1 December 1943 appears at p.274 of the British first edition.

For this volume, Churchill's U.S. publisher, Little, Brown and Company, proposed "The Year of the Climax."  Happily, Churchill considered Onwards to Victory "a very much more suitable title" (Cohen, Volume I, A194.1.a, p.647). 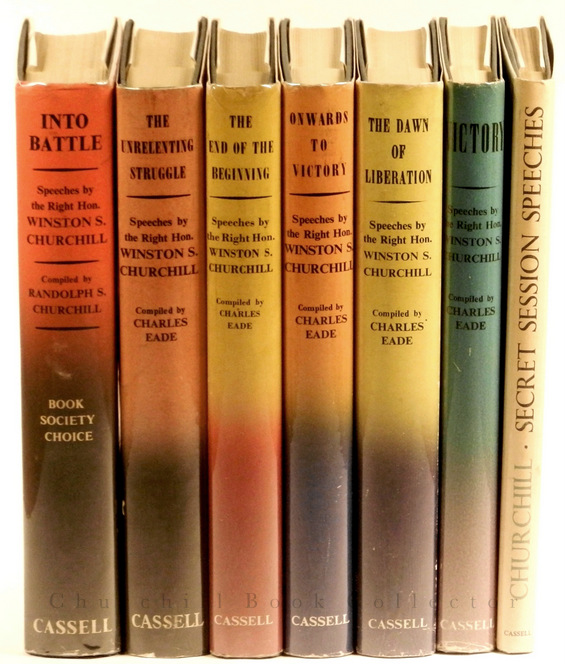 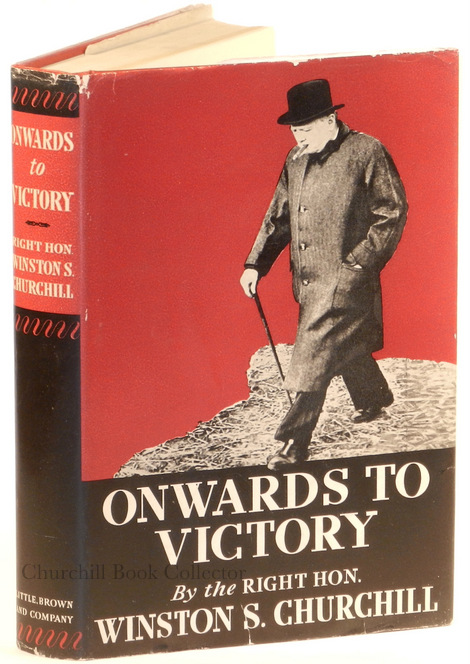 The first edition of Onwards to Victory is bound in coarse, blue cloth.  The dust jacket is colored bright orange on the upper half transitioning into purplish-blue on the lower half, with print in white and black.  There were three printings of the British first edition issued between June 1944 and 1947.  Collectors should note that the first printing dust jackets are unique, second and third printings distinguished by changes to flap content.

As with the British editions, there were eventually seven individual U.S. volumes of Churchill's war speeches published between 1941 and 1946. 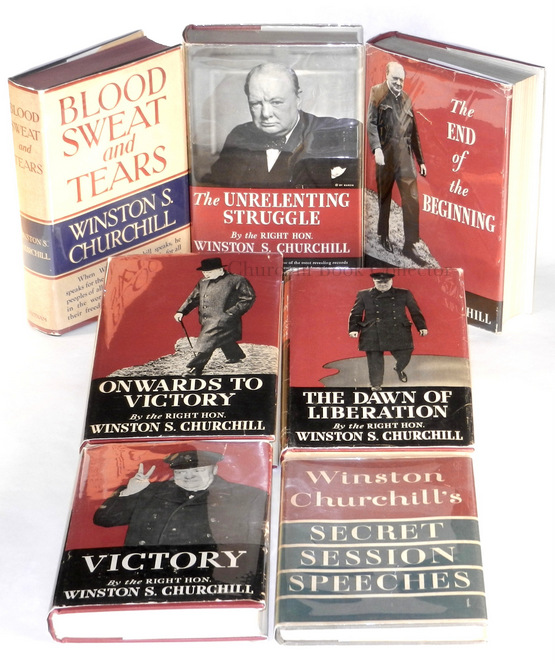 However, unlike their British counterparts the U.S. editions vary considerably in publisher, size, and appearance.  The first volume, with a U.S. title of Blood, Sweat, and Tears, was published by G.P. Putnam's Sons, in a binding style matching Putnam's publications of Great Contemporaries (1937), While England Slept (1938), and Step By Step (1939) but with a distinctively unique dust jacket.  Volumes 2-6 were published by Little, Brown and Company.  Each of these five volumes was bound in red cloth with a black and red illustrated dust jacket, but the volumes differ considerably in height with volumes 4-6 smaller.  Wartime material rationing is cited as the reason for this shrinking on the Volume 5 dust jacket flap. The final volume was published by Simon and Schuster in an entirely different size, binding, and dust jacket style.