"These essays on Great Men of our age have been written by me at intervals
during the last eight years. Although each is self-contained, they throw from various angles,
a light upon the main course of the events through which we have lived.
I hope they will be found to illustrate some of its less well-known aspects.
Taken together they should present not only the actors but the scene.
In their sequence they may perhaps be the stepping-stones of historical narrative." 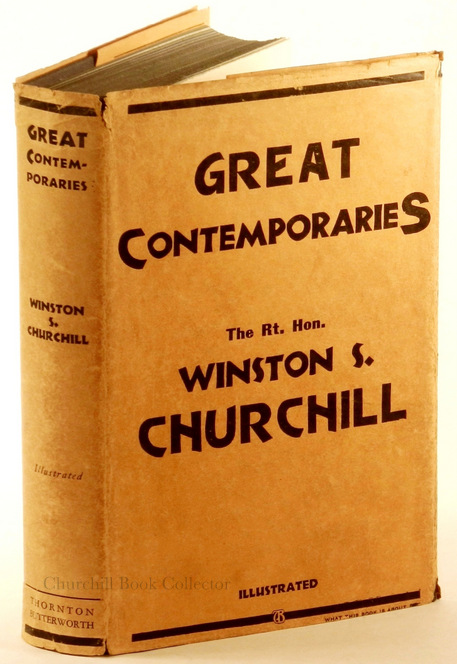 Great Contemporaries is Churchill's much-praised collection of insightful essays about 21 leading personalities of the day - including the likes of Lawrence, Shaw, and, most famously, Hitler. Churchill's piece about Hitler can be a shock to the modern ear, underscoring both Churchill's ability to make a balanced appraisal of his subject and his earnest desire to avoid the war that Churchill would fight with such ferocious resolve only a few years after this book was published.

There is a reason this book is still in print today.  It was written with what has been called "penetrating evaluation, humor, and understanding."  Churchill's balanced and nuanced perspectives are a good model for many of today's more polemic writers.  And naturally, in the course of sketching the character of his contemporaries Churchill necessarily reveals some of his own character and perspective.

Churchill's portrait of T.E. Lawrence, published here just a few years before the Second World War, might well have been written about the author rather than by him:  "The impression of the personality of Lawrence remains living and vivid upon the minds of his friends, and the sense of his loss is in no way dimmed among his countrymen. All feel the poorer that he has gone from us. In these days dangers and difficulties gather upon Britain and her Empire, and we are also conscious of a lack of outstanding figures with which to overcome them. Here was a man in whom there existed not only an immense capacity for service, but that touch of genius which everyone recognizes and no one can define."  (Great Contemporaries, p.164)

By no means are these merely hagiographic sketches of friends and supporters.  Churchill was as gracious with political and philosophical opponents as with supporters.  Neville Chamberlain, whose appeasement policies Churchill implacably opposed and whom Churchill would replace as Prime Minister, wrote to Churchill, saying "How can you go on throwing off these sparkling sketches with such apparent ease & such sustained brilliance, in the midst of all your other occupations is a constant source of wonder to me" (Letter of 4 October 1937).

While some of the subjects of Churchill's sketches have receded into history, many remain well-known and all remain compellingly drawn.  This is as fascinating a read today as it was in 1937. 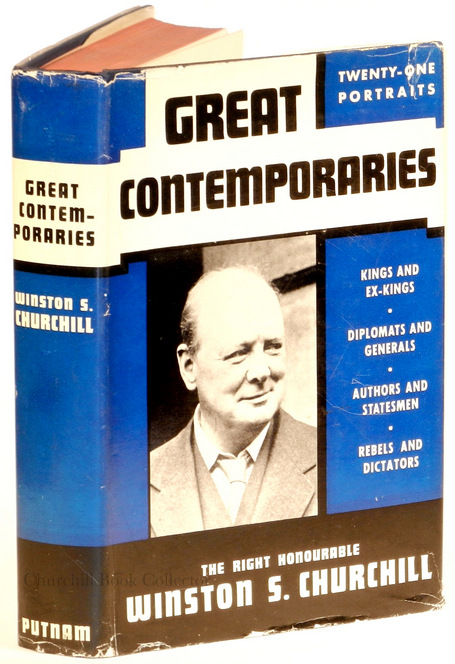 The British first edition is bound in deep but vivid blue cloth and wrapped in a bright orange dust jacket which echoes the style of Thoughts and Adventures (published five years earlier).  The first printing was published on 4 October 1937.  Although there were a total of six printings of the first edition in the final three months of 1937, collectors should note that the first printing dust jacket is unique, with changes to the front flap on the second and subsequent printings.

A U.S. first edition published by G. P. Putnam's Sons followed on 5 November 1937, a month after its British counterpart.  This U.S. first edition is entirely different in appearance.  The smooth navy cloth binding with red banners, silver print, and red-stained top edge is bound in the same style as subsequent U.S. first editions of While England Slept (1938), Step by Step (1939), and Blood, Sweat, and Tears (1941).

The striking U.S. first edition dust jacket bears a photo of Churchill and is printed in vivid blue, black, and white.  The U.S. edition saw three printings, but as with the British first printing, the dust jacket of the U.S. first printing is unique, with changes to the second and third printings.

In November 1938 the British publisher issued a second, revised edition.  This edition is important to collectors, as it adds four new essays for Fisher, Parnell, Baden-Powell, and, most notably, Roosevelt.  The dust jacket for this edition is as rare and nearly as desirable as that of the first edition, with a distinctive illustration of Churchill on a blue background filling the front cover.  The binding is similar to that of the first edition, but in a coarser, duller cloth.  There were two printings of this revised edition, the second printing in May 1940 - the month Churchill became Prime Minister.