By Winston S. Churchill
First published in 1951 by Cassell and Company Ltd., London

"Ten ancient capitals of Europe are behind the Iron Curtain.
A large part of this continent is held in bondage.
They have escaped from Nazism only to fall into the other extreme of Communism.
It is like making a long and agonizing journey to leave the North Pole
only to find out that, as a result, you have woken up in the South Pole." 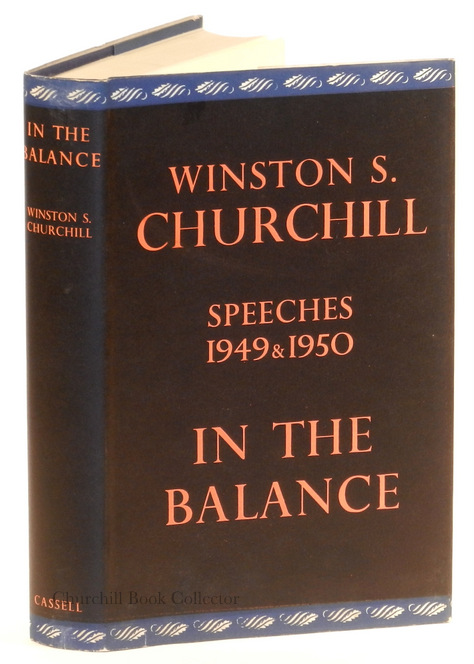 This is the third of Churchill's five postwar speech volumes.  In the Balance includes 58 speeches and broadcasts delivered between 26 January 1949 and 14 December 1950.

In the Balance was published on 18 October 1951, just a week before the Conservatives won the General Election, returning Churchill to Downing Street on 26 October 1951 at the age of 77.

Befitting a Leader of the Opposition, the speeches address a wide range of domestic and foreign issues, including devaluation of the British Pound, the General Election of February 1950 (which drastically diminished Labour's majority, setting the stage for the 1951 General Election), the Korean War, and establishment of the North Atlantic Treaty Organization.  Many of the speeches were delivered abroad - including in the United States, France, Belgium, and Denmark.

Perhaps nothing better speaks to Churchill's truly singular experience than his 31 March 1949 speech at the Massachusetts Institute of Technology, where he gave a tour de force survey of the period 1900-1945 that is both incisive and lyrical, humbling and inspiring:  "In 1900 a sense of moving hopefully forward to brighter, broader, easier days predominated. 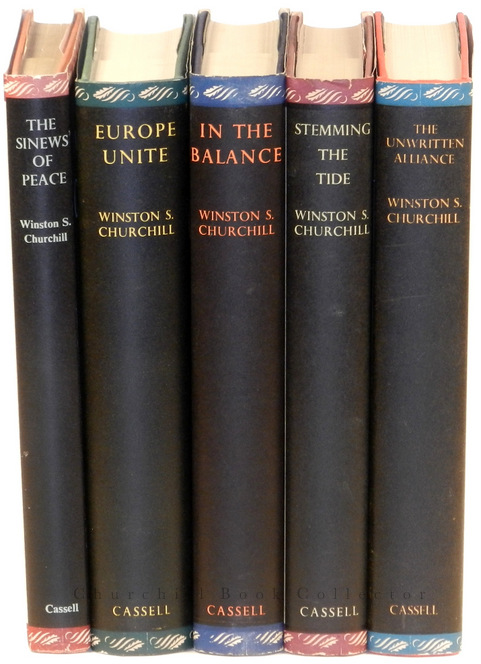 Little did we guess that what has been called the Century of the Common Man would witness as its outstanding feature more common men killing each other with greater facilities than any other five centuries put together in the history of the world... but it is not in the power of material forces in any period... to alter the main elements in human nature or restrict the infinite variety of forms in which the soul and genius of the human race can and will express itself."

The times in which Churchill made these speeches were no less formidable than the abilities of the orator.  Churchill's five post-WWII speech volumes span the period from Demobilization in late 1945, when Churchill was Leader of the Opposition, through his second Premiership, into a time when Churchill passes "into a living national memorial" of the time he has lived and the Nation, Empire, and free world he has served.  The events encompassed by these years are in many ways no less dramatic than those of the war years - the unraveling of the British Empire, the post-war recovery, the onset of the Cold War, Soviet acquisition of the atomic bomb, development of the hydrogen bomb, both Cold and proxy war between the Western and communist powers, and the beginning of the space age.

These postwar speech volumes are much scarcer than Churchill’s War Speeches volumes; each of these five books had only a single printing.  The final volume, The Unwritten Alliance, is the last book of Churchill's speeches published in his lifetime and was issued only in Britain, with no U.S. edition.

The five British first editions of the postwar speeches are uniform in height and were issued in striking black dust jackets with a border along the top and bottom of the jacket featuring a repeating white oak leaf design. 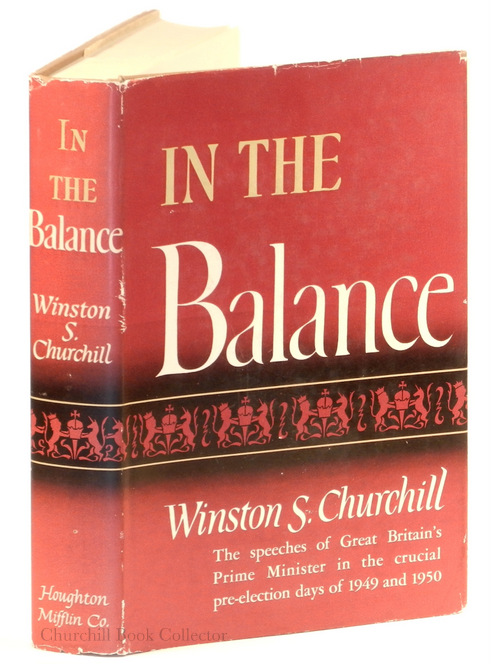 The background color for the oak leaf border and the spine and front cover print color vary with each volume.  The dust jacket rear faces and flaps are white, printed black.  The bindings are bound in a simple, uniform style, but vary in cloth color.

The British first edition of In the Balance is bound in dark blue cloth stamped gilt on the spine.  The dust jacket features a complementary blue background for the oak leaf border and is printed in orange-red and black.

Publication was 18 October 1951, with a single printing of 8,200.  As noted by Churchill Bibliographer Ronald Cohen, the dust jacket contains a few embarrassing errors, including the misspelling of the author's name as "Chuurchill" and a blurb reference to "More than sixty speeches and address" when there are in fact only 58.

U.S. publication considerably lagged behind that of the British first edition.  "Houghton Mifflin expressed little interest until Churchill won [the General Election of 1951]” (Langworth, A Connoisseur's Guide, p.300).  The U.S. first edition was published on 22 April 1952 using British sheets, but is considerably different, bound in a medium brown cloth with dark brown and black spine decoration and print.  The dust jacket is printed red, white, black, and dark yellow-gold on white paper, with a red background on the spine and front face.  A horizontal band on the lower half of the jacket front cover and spine features a repeated Marlborough arms motif against a black background banded above and below by a thin dark yellow-gold rule.  A major weakness of this attractive U.S. edition is the exceptional vulnerability of the red dust jacket spine to fading.  Most surviving jacketed copies are found thus. 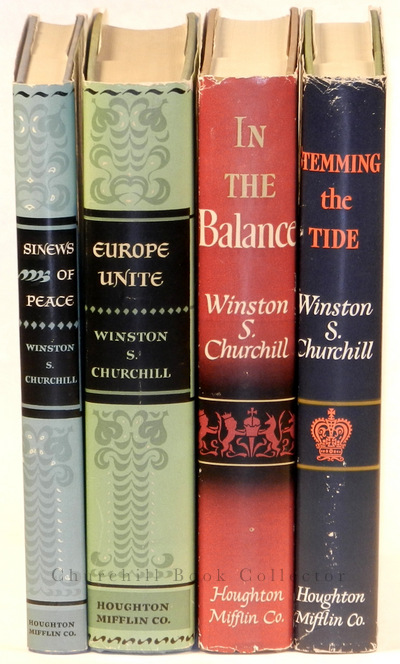