"...it seems that my fortunes in this land
are to be a succession of adventures and escapes,
any one of which would suffice for a personal experience of the campaign...
This I recognize as... the lot of the writer in the field...
But these hazards swoop on me out of a cloudless sky,
and that I have hitherto come unscathed through them,
while it fills my heart with thankfulness to God for His mercies,
makes me wonder why I must be so often thrust to the brink and then withdrawn." 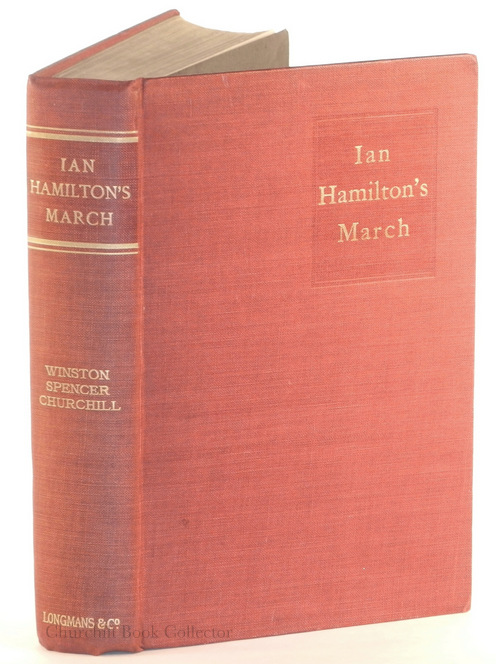 Ian Hamilton's March is the second of Churchill's two books based on his dispatches sent from the front in South Africa.

In October 1899, the second Boer War erupted in South Africa between the descendants of Dutch settlers and the British. As an adventure-seeking young cavalry officer and war correspondent, Churchill swiftly found himself in South Africa with the 21st Lancers and an assignment as press correspondent to the Morning Post. Not long thereafter - on 15 November 1899, Churchill was captured during a Boer ambush of an armored train. His daring escape less than a month later made him a celebrity and helped launch his political career.

Churchill's first Boer War book, London to Ladysmith via Pretoria, contained 27 letters and telegrams to the Morning Post written between 26 October 1899 and 10 March 1900 and was published in England in mid-May. Ian Hamilton's March completes Churchill's coverage of the Boer War, comprising 17 letters to the Morning Post, spanning 31 March through 14 June 1900.

Ian Hamilton's March was published in England on 12 October, less than two weeks after Churchill's first election to Parliament. A second and final printing is bound identically as the first printing. This second printing states "SECOND EDITON" on the title page above the publisher and notes "Second Edition, November 1900." on the title page verso. There are also minor emendations to the text noted by Ronald Cohen in his excellent bibliography.

Of interest to bibliographically-inclined collectors, Cohen also notes that a total of 28 copies of a second issue of the first printing were produced. These copies combine a first printing title page with contents "otherwise partly or wholly identical to those of second-printing copies." Based on a notation in the publisher's ledger that these copies were "made up from waste", Cohen speculates that these 28 copies were cobbled together to meet the same demand that led swiftly to a second printing. (Vol. I, A8.1.b & A8.1.c, pages 104-6)

Though a companion and sequel to London to Ladysmith, this book is notably different in appearance, content, and scarcity. The first printing saw only 5,000 copies - half as many copies as London to Ladysmith. A second and final printing added only 1,700 copies. Where Ladysmith bore a lavishly illustrated binding, Ian Hamilton's March was bound in red cloth matching the style of Churchill's first published book, The Story of the Malakand Field Force, with gilt stamped spine print, spine title box horizontally framed with gilt rules, and a blind stamped title box on the upper right front cover with gilt stamped title within. This was fitting, as The Story of the Malakand Field Force and Ian Hamilton's March were the first and last Churchill first editions published by Longmans.

While London to Ladysmith via Pretoria had swiftly published Churchill's dispatches in the wake of his capture and escape, for Ian Hamilton's March "the texts of the originally published letters were more extensively revised and four letters were included which had never appeared in periodical form" (Cohen, A8.1.a, Vol. I, p.105). Churchill effected these revisions while on board the passenger and cargo steamer Dunottar Castle which was requisitioned as a troop ship, en route home to England.

Churchill arrived on 20 July 1900 and spent the summer campaigning hard in Oldham, capitalizing on his war status and winning his first seat in Parliament on 1 October 1900 in the so-called "khaki election."

The narrative in Ian Hamilton's March includes the liberation of the Pretoria prison camp where Churchill had been held and from which he had famously escaped. The title takes its name from General Sir Ian Hamilton's campaign from Bloemfontein to Johannesburg and Pretoria. Churchill would maintain a life-long friendship with Hamilton, who would be involved in the Gallipoli landings and to whom Churchill would sell his first country home. 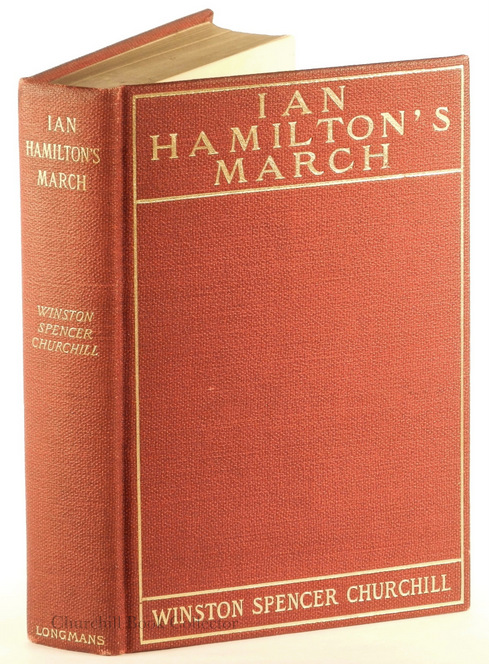 The U.S. first edition saw only a single printing. The number sold is unclear, but seems to be fewer than 1,500. Published on 26 November 1900, the U.S. first edition was thus available for sale when Churchill arrived in New York on 8 December on board the Lucania for his first North American lecture tour.

There was also a Canadian issue of the U.S. sheets, bearing an attractive tan cloth or tan paper binding with crossed Union Flag and White Ensign on the front cover and a red fleur-de-lis on the spine.