By Winston S. Churchill
First published in 1942 by Cassell and Company Ltd., London 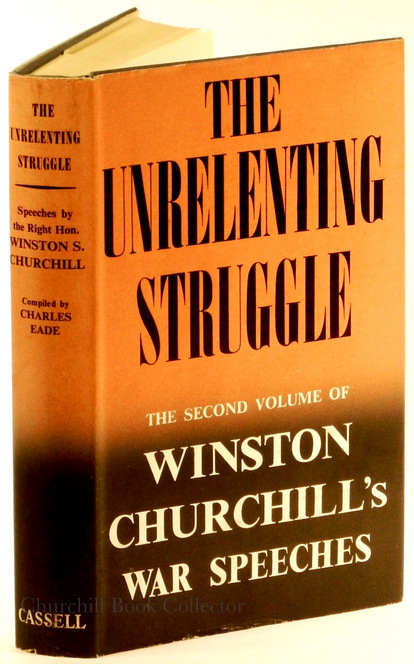 The Unrelenting Struggle is the second volume of Churchill's famous war speeches, containing 72 of Churchill's speeches, broadcasts, and messages to Parliament from November 1940 to the end of 1941. Churchill's words during this time resounded during some of the darkest and most uncertain days of the war.  The volume ends with a crucial turning of the tide.

In the days after the 7 December 1941 Japanese attack on Pearl Harbor, the United States formally entered the Second World War, marking the end of Britain's solitary stand against Hitler's Germany, which it had sustained since the fall of France.  Churchill immediately decided to travel to the United States, and on 12 December 1941 he boarded the battleship Duke of York and began the 10-day trip across the Atlantic - a perilous journey at a time when German U-Boats plagued the North Atlantic.  The final two speeches in this volume are Churchill's first speech to Congress of 26 December 1941 and to the Canadian Parliament on 30 December 1941. 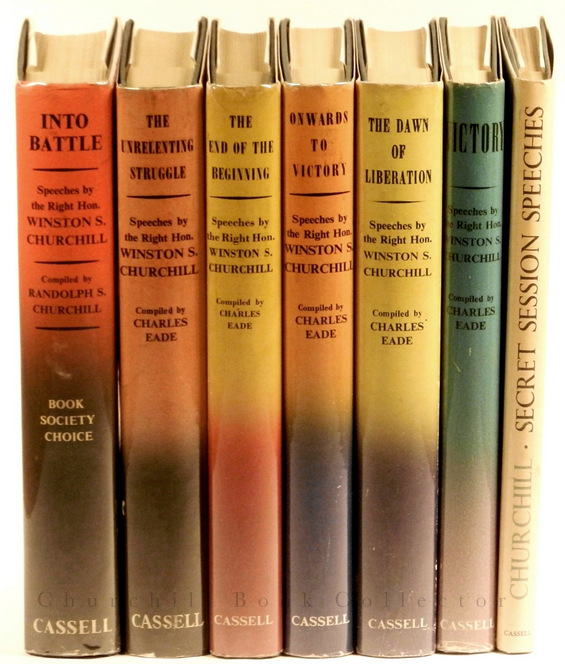 Churchill's son, Randolph, had served as compiler for the preceding speech volumes Arms and the Covenant and Into Battle.  By the time this volume was being prepared for publication, Randolph was serving in Africa.  Charles Eade, Editor of the Sunday Dispatch, offered his services free of charge.  His offer was accepted and he performed this service for the balance of Churchill's war speech volumes, as noted on title pages and dust jacket spines.

The first printing of The Unrelenting Struggle is found bound either in the more common coarse cloth or a smoother blue cloth.  A first state of the first printing is distinguished by irregular pagination on page 281.  The dust jacket is colored orange on the upper half transitioning into charcoal on the lower half, with print in white and black.  Collectors should note that the first printing dust jackets are unique, second and later printings distinguished by changes to flap content.  There were four printings of the first edition issued between September 1942 and June 1946. 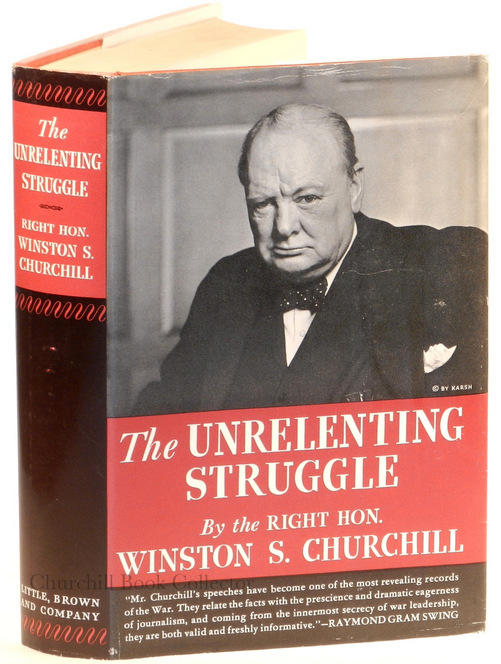 The U.S. first edition is the first of Churchill's first editions published by Little, Brown and Company.  It is bound in red cloth stamped in gilt with black title panels on the spine and front cover.  The illustrated dust jacket is printed red, black, and white with a head and shoulders photograph by Karsh on the upper front panel.

As with the British editions, there were eventually seven individual U.S. volumes of Churchill's war speeches published between 1941 and 1946.  However, unlike their British counterparts the U.S. editions vary considerably in publisher, size, and appearance.  The first volume, with a U.S. title of Blood, Sweat, and Tears, was published by G.P. Putnam's Sons, in a binding style matching Putnam's publications of Great Contemporaries (1937), While England Slept (1938), and Step By Step (1939) but with a distinctively unique dust jacket. 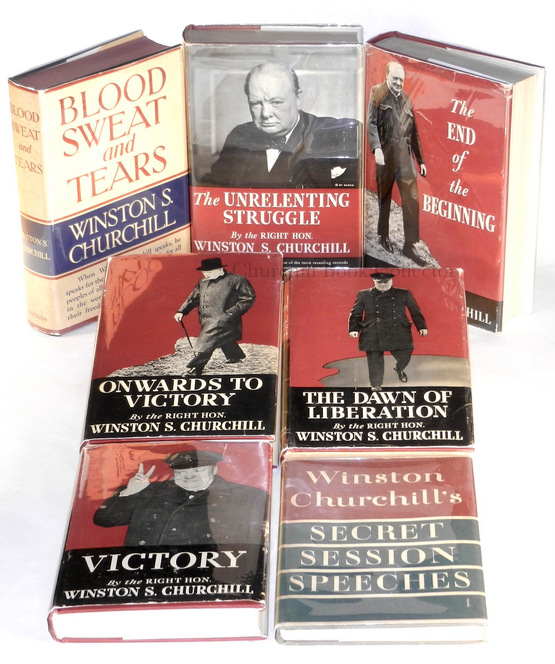 Volumes 2-6 were published by Little, Brown and Company.  Each of these five volumes was bound in red cloth with a black and red illustrated dust jacket, but the volumes differ considerably in height with volumes 4-6 smaller.  Wartime material rationing is cited as the reason for this shrinking on the Volume 5 dust jacket flap.  The final volume was published by Simon and Schuster in an entirely different size, binding, and dust jacket style.