"We are really doing our very best. There are no doubt many mistakes and shortcomings.
A lot of things are done none too well.  Some things that ought to be done
have not yet been done. Some things have been done that had been better left undone.
But looking broadly at the whole picture as it is viewed by an impartial eye,
the way in which our system of Government and society is standing up
to its present ordeals, which will certainly increase in severity,
constitutes a magnificent achievement, and has justly commanded
the wonder and admiration of every friendly nation in the world" 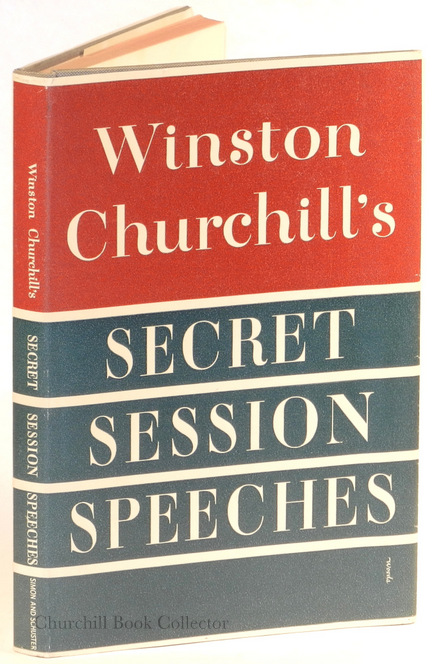 Secret Session Speeches is the seventh and final volume of Churchill's war speeches.  This slim volume contains five speeches Churchill made to the House of Commons sitting in Secret Session - those of 20 June and 17 September 1940, 25 June 1941, and 23 April and 10 December 1942.  It is anomalous among the other war speeches volumes in many respects.

First, publication of the U.S. edition preceded the British, making the U.S. the true first edition.

Second, both the U.S. and British first editions mark a significant visual departure from the preceding war speeches first editions.

Third, unlike the contents of the other war speeches volumes, the words within this volume were not made or meant for public consumption.  In fact, there was no public record of the speeches at all.  As explained by the volume's compiler, Charles Eade, in his Introduction, "In accordance with Parliamentary custom, these speeches were not recorded even for official and historical purposes.  Fortunately, the speeches were of such character that Mr. Churchill before delivering four of them prepared full texts of what he proposed to say."

Only the first speech, that of 20 June 1940 after the fall of France, lacked a full text dictated by Churchill.  When Churchill rose that evening in the House of Commons he held nine pages of typewritten notes and headings, bearing written additions and alterations made by him during the course of the preceding discussion.  Churchill spoke for more than an hour.

For this first of Churchill's Secret Session speeches, the volume reproduces a photocopy of his original notes and emendations.  The remaining four speeches are printed in full.

Once the ban on revealing what had taken place in the wartime Secret Sessions was lifted in December 1945, Churchill was able to ask Charles Eade, who ultimately compiled all but the first of Churchill's war speeches volumes, to prepare them for publication.  Eade, Editor of the Sunday Dispatch, continued to compile Churchill's war speech volumes free of charge - a service he first volunteered in 1941 when Churchill's son and previous compiler, Randolph, was called into wartime service. 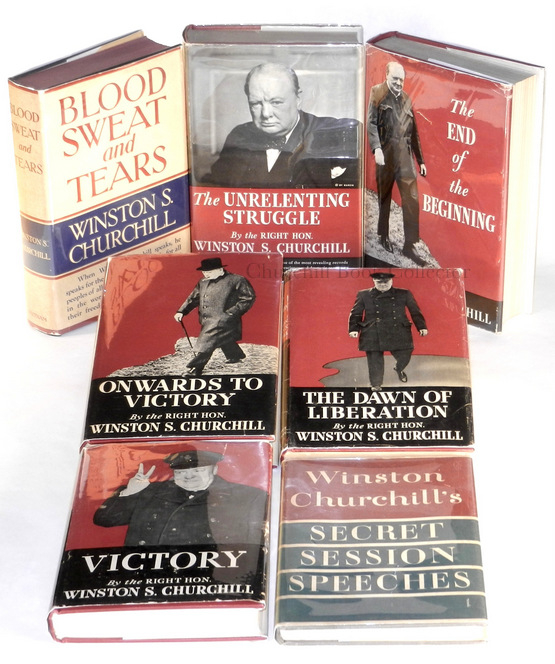 As with the British editions, there were eventually seven individual U.S. volumes of Churchill's war speeches published between 1941 and 1946.  However, unlike their British counterparts the U.S. editions vary considerably in publisher, size, and appearance.  The first volume, with a U.S. title of Blood, Sweat, and Tears, was published by G.P. Putnam's Sons, in a binding style matching Putnam's publications of Great Contemporaries (1937), While England Slept (1938), and Step By Step (1939) but with a distinctively unique dust jacket.  Volumes 2-6 were published by Little, Brown and Company.  Each of these five volumes was bound in red cloth with a black and red illustrated dust jacket, but the volumes differ considerably in height with volumes 4-6 smaller.  Wartime material rationing is cited as the reason for this shrinking on the Volume 5 dust jacket flap.

This final volume was published by Simon and Schuster in a single printing on 22 August 1946, and in an entirely different size, binding, and dust jacket style from the preceding six U.S. first editions of Churchill's war speeches.  The binding is a dark gray-blue cloth stamped in gilt with a red-stained top edge.  The dust jacket’s front cover and spine feature a large red horizontal band bearing the author's name and four smaller green bands bearing the title, each colored band interspersed with a thinner white band.  The front cover and spine print is white.  The rear panel and flaps are white with red and green print. 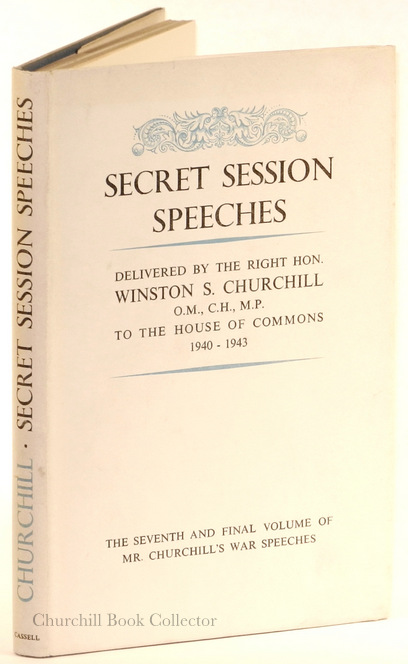 Collectors should note that some copies are known with two printed cards laid in - a compliments card from the author and a card that states 'THE REFERENCE to "American Authorities" in the Introduction refers to the United States Government and General Eisenhower.'

The Canadian publisher, McClelland and Stewart, chose to follow the aesthetic appearance of the preceding five Little, Brown and Company editions rather than the new Simon and Schuster design.  Consequently, the Canadian edition is bound in red cloth stamped in gilt with black title panels on the spine and front cover.  The illustrated dust jacket is printed red, black, and white with a photo of Churchill, seated and with cigar, reviewing documents from a despatch box.  All seven Canadian war speeches volumes were published by McClelland and Stewart, with only the first and this final volume differing appreciably in binding and dust jackets from their U.S. counterparts.

An Australian first edition of Secret Session Speeches is also a stand-alone design.  While the volume dimensions match those of preceding Australian war speeches editions, the binding is found in a variety of unique hues and the dust jacket features a white spine and rear panel, each with black print. Only the front panel is colored, with bright orange background with white print on the upper half transitioning to purple with white print on the lower half.

While there were ultimately seven British, U.S., and Canadian first editions of Churchill's war speeches, there were only six Australian editions, there being no Australian edition of the first volume, Into Battle.  The bindings of the Australian edition war volumes vary considerably within and between each edition.  The dust jackets roughly echo the style of the British first editions, though with significant differences, particularly to the first volume (The Unrelenting Struggle) this final volume, Secret Session Speeches.