By Winston S. Churchill
First published in 1952 by Cassell and Company Limited, London

"I was very glad that Mr. Atlee described my speeches in the war
as expressing the will... of the whole nation...
It was a nation and race dwelling all round the globe that had the lion heart.
I had the luck to be called upon to give the roar.
I also hope that I sometimes suggested to the lion the right places to use his claws.” 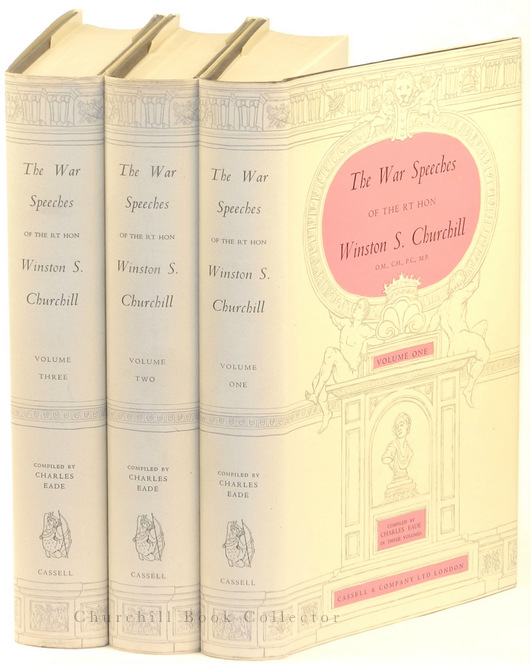 Having done so much to win the war, Churchill faced frustration of his postwar plans when his wartime government fell to Labour in the General Election of July 1945, bringing Clement Atlee to the premiership and placing Churchill in Opposition.  In the British General Election of October 1951 the Conservatives won 321 seats to Labour’s 295, returning Churchill to Downing Street at the age of 77.  He would remain Prime Minister until April 1955.

Churchill's return to the premiership induced his publisher, Cassell, to capitalize on renewed interest in Churchill's war speeches.  Between 1941 and 1946, Churchill's war speeches were published in seven individual volumes.  These editions had been visually striking, but were printed on cheap wartime paper, bound in coarse cloth with thin boards beneath, and the dust jackets were likewise printed on thin paper.  Moreover, by 1952 all seven volumes were out of print. 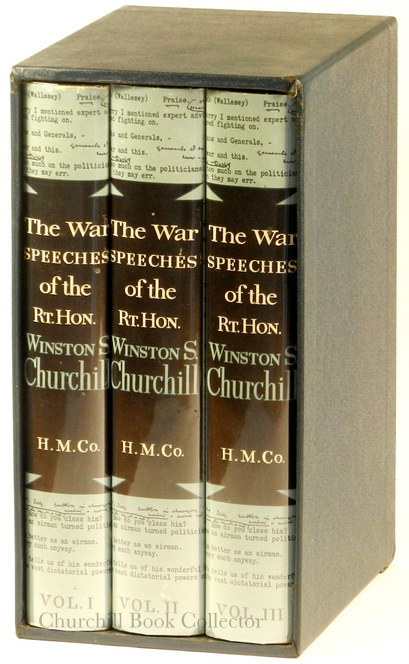 The contents too had a noteworthy makeover.  In 1942 Charles Eade, Editor of the Sunday Dispatch, had stepped in as compiler of Churchill's wartime speech volumes, replacing Churchill's son, Randolph, who had been called to wartime service.  Notably, he had offered his services free of charge, stating, "my reward for the task would be the pleasure of doing it" (7 May 1941 letter from Charles Eade to Kathleen Hill).  Eade ultimately edited six of the seven wartime volumes - all except the first, Into Battle.

For this edition, Eade returned, modifying many speech titles, adding several speeches, and eliminating several for which he deemed "time has reduced their significance."  The speeches "are linked, where necessary, with brief notes to form a complete, chronological story."  Most welcome and helpful is the addition of an index, which was not present in the original wartime volumes.

A U.S. edition was issued by Houghton Mifflin in 1953 using British sheets.  There was just a single issue of 500 copies, making this edition among the smallest of any British or U.S. edition of Churchill's books.

This U.S. first edition was bound quite differently and more elaborately than its English counterpart, with a black cloth spine decorated and printed in gilt, over red cloth boards, yellow-stained top edge, and head and foot bands.  The light blue and black dust jackets are illustrated with a reproduction from Churchill's hand-corrected typescript of the first Secret Session speech.  The publisher issued the three-volume set in an undecorated navy leatherette slipcase.